We have all become scriptwriters in the social media theatre of life, but someone else is directing the play, an article by Professor James Blignaut, a SAEON honorary research associate, was published in Daily Maverick of April 13. In the article Professor Blignaut cautions that it has never been so important to discern between fact and fiction, the reality and the myth, the truth and the deception.

An article titled Toxic puffer fish mass washouts in Cape Town was published in Times Live, Sowetan Live and safrica24.com on March 25. The article mentions that  “oceanographic and meteorological conditions contributing to the development of algal blooms or so-called ‘red tides’, low-oxygen conditions, large temperature differences (icy to warm water), washouts and mortalities of fish and invertebrates on the West Coast, False Bay and the rest of SA are monitored and tracked by the National Oceans and Coastal Information Management System (OCIMS), a partnership between DFFE, the Council for Scientific and Industrial Research (CSIR) and the SA Environment Observation Network (SAEON)”.

Professor Juliet Hermes, manager of SAEON’s Egagasini Node, was quoted in an article titled When the Doctor is in, then Cape Town is out, published in Sunday Times on March 7. The article asks the question whether “windy Cape Town (is) getting windier”. 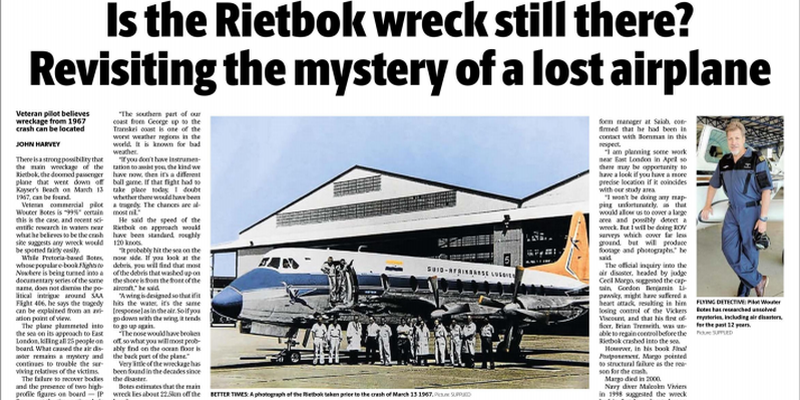 Professor Tommy Bornman, manager of SAEON’s Elwandle Node, was cited in an article titled Revisiting the Rietbok tragedy published in The Herald of March 3. The article also appeared in the Daily Dispatch of March 3 under the title Rietbok wreck still there? Revisiting the mystery of a lost airplane. Prof Bornman was consulted about the possibility of recovering the main wreckage of the Rietbok, the passenger plane that went down off Kayser’s Beach on 13 March 1967.