By Tsumbedzo Ramalevha, PhD candidate based at the Ndlovu Node

“What nature has for us is so incredible.”

These are the words of Princess Makumbi, a grade 10 learner at Lebeko High School in Ba-Phalaborwa Local Municipality and a SAEON Kid.

One of nature’s most incredible resources is water. The Earth’s surface is ~80% water, with only ~2.5% readily available as fresh water. Ba-Phalaborwa local municipality, where SAEON’s Ndlovu Node is located, gets its water from the Olifants River in the Limpopo River Basin, which is part of an international drainage basin that stretches across South Africa, Mozambique, Zimbabwe and Botswana.

However, unchecked pollution, inappropriate land and resource use, weak enforcement of regulations and poor protection of habitats and biodiversity have all contributed to the rapid deterioration in the Olifants River catchment, which, in turn, affects the livelihoods of all the catchment residents. The upper catchment has coal-mining operations as well as energy-generation industry and development, which make use of the water from the Olifants River and pose a major threat to water quality by increasing salinity, acidification and toxic metal loads through acid mine drainage.

In 2018 the iWaGSS research project, in partnership with SAEON’s Ndlovu Node and other partners, initiated an integrated water resource management (IWRM) process in line with the United Nations sustainable development goal 6 (SDG6), which aims to “ensure availability and sustainable management of water and sanitation for all“ by 2030. A telemetric water ecological monitoring network consisting of five measuring stations along the Olifants River and its tributaries was constructed. 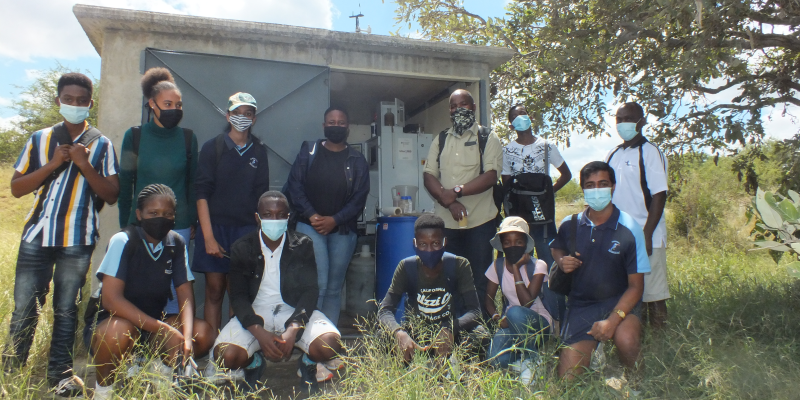 In March 2021, a group of 10 learners from schools around Ba-Phalaborwa municipality visited the Oxford station to get acquainted with the techniques and processes of water monitoring and the technologies that enable those involved in water governance and monitoring to be more proactive towards issues relating to water quality. Oxford station is one of the real-time water-quality monitoring stations in the Olifants River.

The learners were introduced to different parameters such as water velocity and toxicity. On average, it takes three to seven days for the water passing Oxford station to reach the Phalaborwa barrage and any change in this parameter will guide the speed with which the communication and cleanup preparation can be implemented. With mining industries in the upper catchment, it is crucial to know the toxicity levels of the Olifants River as the Ba-Phalaborwa community get their water from the Olifants River.

The level and ranges of pH in the Lowveld region were also explained and how these could be used as indicators of change in water quality. Other parameters such as water height, which assists during flooding, were also explained.

Learners were taken through a one-on-one explanation of the Oxford station, all the parameters that it monitors and how data is stored and transferred

Learners were encouraged to explore the laboratory at the SAEON Ndlovu Node’s offices to learn more about how the samples collected by node staff members are analysed. This was also done to show the learners how the laboratory can assist them in their science-related projects – their school-based projects as well as their projects for the Eskom Expo for Young scientists.

Feedback from the learners

The learners were asked to address two questions: i) What is your take-home lesson? and ii) What is the importance of these water-monitoring stations? 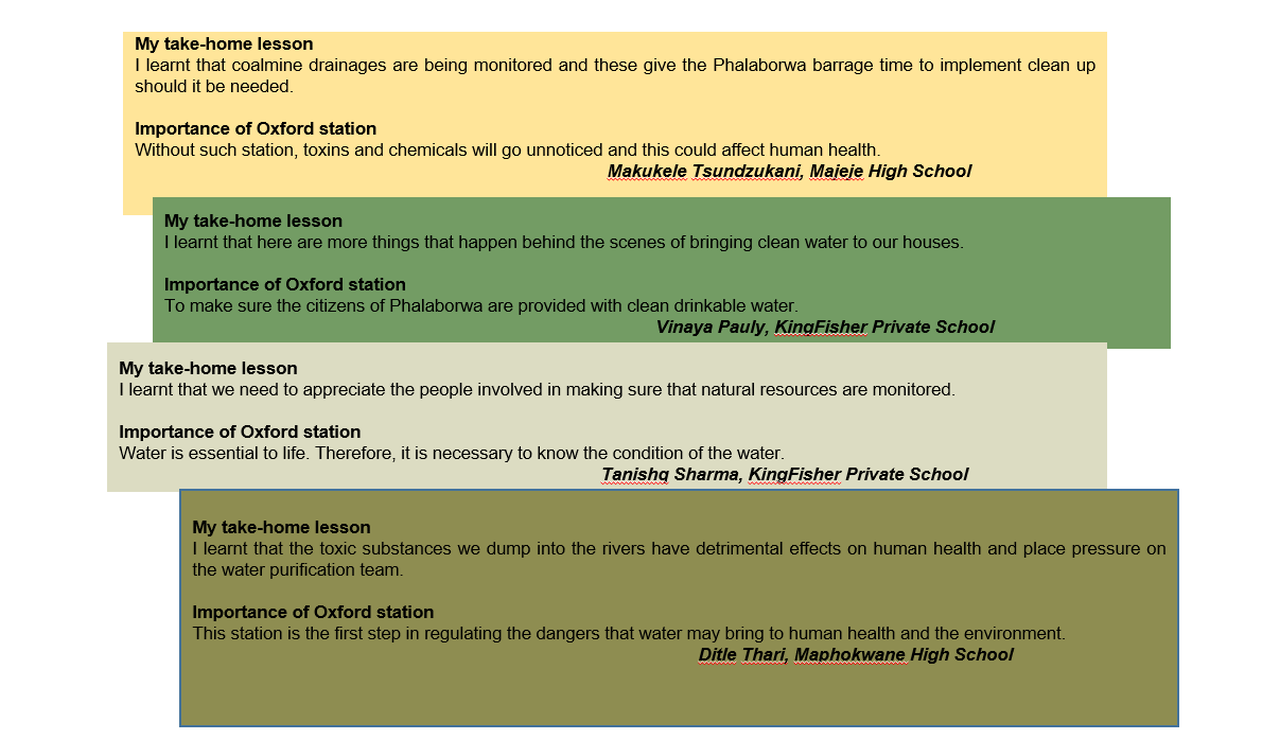 A close relationship between the young generation and technology should be fostered to ensure that it benefits the environment and the sustainable management of natural resources to secure precious resources such as water. Learning that one does not have to visit the station every day to monitor the quality of water was appealing to the learners. They showed a keen interest in how the technology works and how all the parameters can be monitored from the comfort of one’s home.