Bob Scholes (1957–2021): A tribute to an exceptional Earth System scientist and his instructive role in SAEON and ILTER

It would have been early December 1977 when I first met Bob Scholes, by chance, during an arduous hike on the Outeniqua Hiking Trail in South Africa. As a young student he was hiking with his family including his father Ted, a respected member of the Mountain Club of South Africa.

Of course, at the time, neither of us had an idea of what the future held in store for us, both informally as members of the Mountain Club and professionally as environmental scientists.

Upon reflection after my initial shock on hearing the completely unexpected news that Bob had passed away on 28 April, it was not a complete surprise that he spent his last days hiking in the remote and rugged Kaokoland ecosystem on the border of Namibia and Angola. I am sure this aspect of his remarkable life would offer at least some consolation to the crowds of environmental and Earth scientists whom he had entertained and led over many years with insightful systems thinking and effective pursuasiveness.

Indeed, Michael Mirtl of the European Long-Term Ecosystem, Critical Zone and Socio-ecological Research Infrastructure (eLTER RI) has advised us to not try to make sense of it other than simply accepting that Bob’s “trail ended in the shade of an Acacia tree surrounded by the sounds and smells of the continent he loved”. 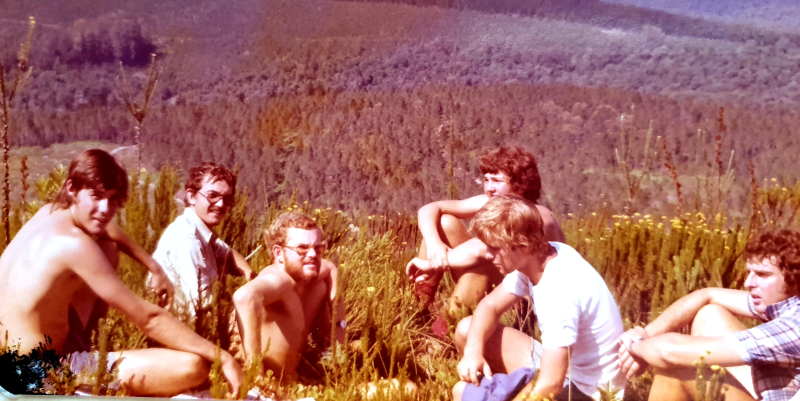 On top of Jonkersberg: A youthful Bob Scholes (left) and Johan Pauw (3rd from left) first met by chance when they spent seven days on the Outeniqua Hiking Trail in 1977, unaware that decades later their shared passion for ecosystems ecology would cause their paths to cross again 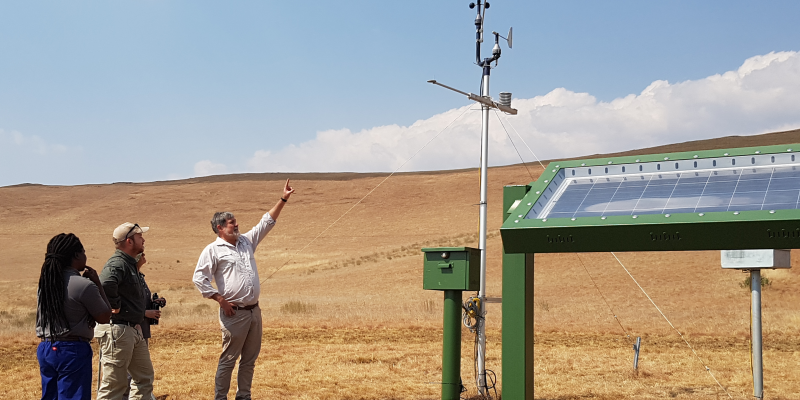 It was some twenty years after our initial meeting that we started collaborating within the SAEON scope of work. Over the last twenty years Bob was instrumental in the creation and growth of SAEON.

The original proposal for the establishment of a national long-term ecological research (LTER) network had Bob’s full support. He was an influential voice in an interdepartmental meeting between leading South African ecologists and the heads of several government departments which was held on 31 March 2001 to discuss the SAEON proposal. This meeting concluded that the South African Government should support SAEON as an instrument of government for sustainable development.

Funding was provided to launch SAEON and an advisory structure was established. I invited Bob to serve on the SAEON Technical Steering Committee and over a period of four years he made an indelible mark on the scientific design and future of SAEON. In this time he was the main author of a foundational document called the “Design of SAEON”, which was accepted as such by the SAEON Advisory Board in 2004.

Over the years following, the “Design of SAEON” served as the blueprint for the roll-out of SAEON in terms of its structure, observations and operations. From being part of the Global Terrestrial Observation System (GTOS), Bob brought his experience to SAEON and based the “Design of SAEON” on the principle of a “hierarchical site design for optimally sampling the environment when resources are limited”. In 2006 he contributed significantly during the first SAEON Summit that was held to demonstrate the cross-ecosystem character of SAEON. This included an inspiring mentoring session for the SAEON Graduate Student Network which we launched at the Summit. 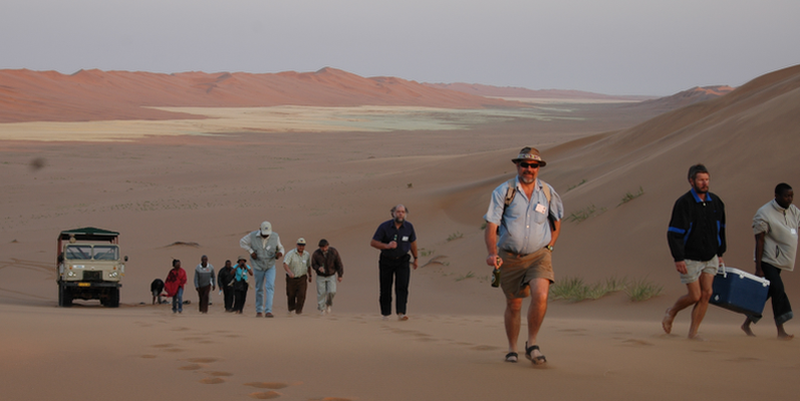 Cheerfully strolling up a sand dune on a sundowner field trip as part of the ILTER meetings at Gobabeb, in the Namib Desert of Namibia 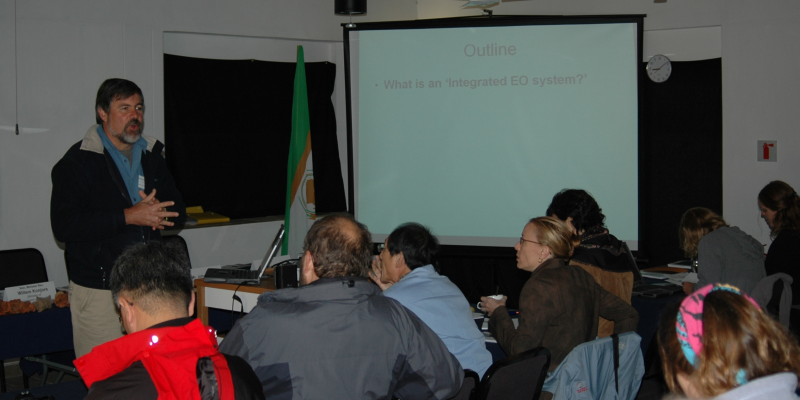 An exceptionally skilful and intellectually entertaining public speaker, Bob was on a roll at Gobabeb, unpacking the elements and operations of an Integrated Earth Observation System for the benefit of ILTER

In 2004, the International Long-Term Ecological Research Network (ILTER) embarked on the development of a 10-year strategy to become self-reliant and truly international after having been incubated by the US LTER Network from 1998 (Mirtl et al., 2019). The details of this strategy were developed during a 2006 ILTER meeting at Gobabeb in Namibia and Bob was there to contribute his insights from the wealth of international  experience he had gained by then.

At one stage he opined that an organisation’s vision statement should be able to fit on the back of a T-shirt. For that he was promptly ordered to offer his T-shirt and his back to the facilitator, who then duly saw to it that the vision statement could indeed fit on the back of a T-shirt, although it was helpful that Bob had broad shoulders to write on.

Bob’s relationship with ILTER was cemented after his first involvement in 2006. Subsequently, during both the First and Second ILTER Open Science Meetings, Bob was an invited keynote speaker where, in his own authentic style, he delivered fascinating and eye-opening integrative talks that stimulated further thought and debate throughout those conferences and beyond. 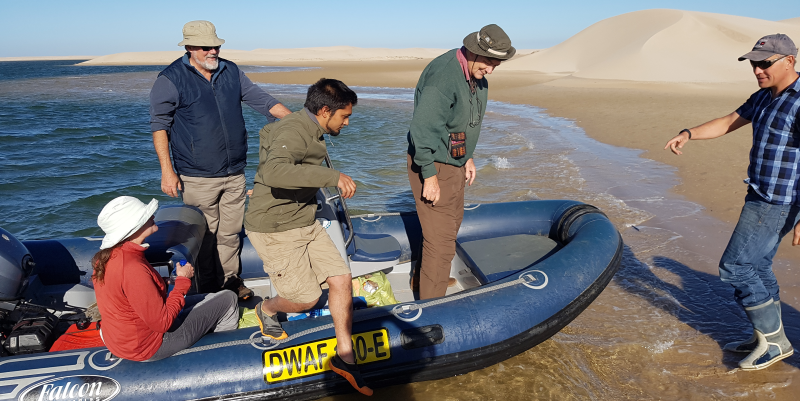 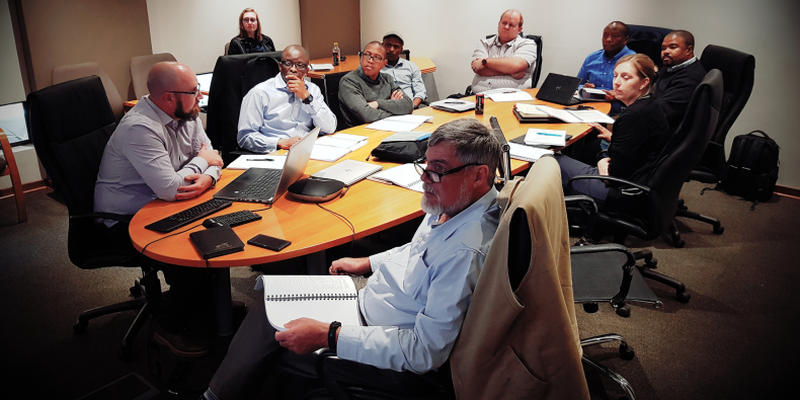 The years moved on and Bob became an internationally respected Earth System scientist. Towards the end of the first decade of this millennium, Bob participated in the node liaison committee of SAEON’s Ndlovu Node, which is located in the Savanna Biome where Bob had been running eddy-covariance flux towers in the Kruger National Park for several years. In the years that followed, the node established a collaboration with Bob by assisting in maintaining the nearest tower and downloading its data.

Nationally, Bob scaled a figurative peak when in 2013 the South African Department of Science and Technology prepared the floor for the South African Research Infrastrucuture Road Map (SARIR) by way of stakeholder workshops. During these workshops, Bob successfully advocated for a terrestrial observation network to be established under the auspices of SAEON. For his sins, he was appointed in 2014 as the lead author (‘champion’) of what would become a successful proposal for the Enhanced Freshwater and Terrestrial Observation Network (EFTEON), which has attracted funding since 2017.

In the following 12 months Bob worked closely with me to find a suitable research infrastructure manager to operationalise EFTEON, which led to the network gaining momentum from 2019 onwards. Bob continued his commitment by serving on the EFTEON Advisory Panel while promoting EFTEON to many local and international audiences, a personal mission he pursued until the end.

It should be obvious that a conclusive part of Bob’s legacy is the creation of SAEON and EFTEON, through which we continue his good work, locally and internationally. To quote Bob: “SAEON was set up to fill an important gap. Who was responsible for long-term observations of the environment, particularly at ecosystems scale? We now have a national network, sparse but growing, to help us detect, understand and advise on the many changes taking place in the South African environment.” (The SAEON Story 2007–2011). Spurred on by Bob’s support and influence, SAEON has since grown exponentially.

By way of marking the end of an extraordinary life, leading ecologists from around the world have drawn attention to the realisation that humanity has just lost one of its finest individuals. Some quotations are included here:

Beryl Morris, Director of Australia’s Land Ecosystem Observatory (TERN): ”The shock waves in Australia were instant and are still spreading.”

Hank Loescher, Director of Strategic Development, National Ecological Observatory Network (NEON): “He had been a joy to work with, and his character exemplified the best attributes found in the human spirit and is a yardstick by which others should aspire to.”

Werner Kutsch, Director-General of the Integrated Carbon Observation System (ICOS): “He has made a difference in connecting people and this made our world a better place.”

Debra Roberts, International Panel on Climate Change (IPCC): “He was generous with his knowledge, a mentor to many and someone who cared deeply about Africa, its ecosystems and its people. He committed his life to understanding the way the planet works and how we might find ways of dealing with its challenges.”

SAEON’s sincere condolences are extended to Bob’s family and close friends. Our wish is that they will find peace in knowing that the legacy left by Bob Scholes will continue to benefit all life on Planet Earth.