Four successive seismic events along the South African coast – cause for concern?

Within the last twenty years, two destructive and deadly tsunami events have taken place. The 2004 Indian Ocean and 2011 Tohoku tsunami events were generated by 9.3 and 9.0 moment magnitudes (Mw) respectively.

Tsunamis are ocean waves generated by underwater disturbance of the seafloor and/or surface impacts, triggered mostly by large shallower focus earthquakes and less commonly by landslides (both land and submarine), volcanic eruptions, meteorite impacts and asteroid and cosmic collisions in the ocean (Figure 1).

With its epicentre in Indonesia, the 2004 Indian Ocean tsunami remains the deadliest transoceanic event in the recorded history of tsunami events with over 220 000 fatalities, whereas deaths caused by the 2011 Tohoku event reportedly exceeded 15 000 with at least 4 539 reportedly missing in the Hokkoido, Tohoku and Kanto regions.

The 2004 Indian Ocean tsunami was recorded 12 hours after the initial rupture at the Gqeberha (Port Elizabeth, South Africa) tide-gauge with an anomalous wave of 2.9 m above mean sea level. Although the effects of this tsunami were not serious along the South African coast, the furthest death from the epicentre was recorded here.

These events and other extreme marine waves such as storm surges have increased awareness and interest among scientists and coastal managers in these unavoidable and often unpredictable natural coastal hazards. As a result, scientists globally have been searching for evidence of past tsunamis to answer questions such as: 1) where have past tsunami events occurred; 2) how often do they occur and/or recur; 3) where are future events likely to occur; and 4) how large future events may become in terms of coastal inundation and damage, especially considering global climate change and the associated sea-level rise.

While most of the world’s coastal areas bordering passive margins have no known records of large tsunamis (including South Africa), the 2004 Indian Ocean event has demonstrated that no coastline is immune to tsunami wave inundation. South Africa is not demarcated as a high-risk area of tsunami events, partly due to a tectonically stable coastline and distance from the source of mega earthquakes, particularly those generated in the subduction zones of the Indian Ocean (Figure 2).

However, more recently there has been renewed concern with the occurrence of at least four earthquakes within a space of five months along the South African coast. The first of these took place on the evening of 26 September 2020, with a 6.2 magnitude at a depth of 10 km measured 1 922 km southeast of Cape Town.

This was followed by a magnitude 2.5 earthquake in Cape Town at least 90 minutes after the first earthquake. Seismic tremors were reportedly felt up to 100 km from the epicentre, but no damages were reported (Figure 3). According to the Council for Geoscience (CGS) and the United States Geological Survey (USGS), this second earthquake was not related to the first 6.2 earthquake that occurred offshore.

The magnitude 6.2 and 5.1 earthquakes occurred on divergent plate boundaries separating the African and Antarctic plates to the west of South Africa’s Prince Edward Islands in the Southern Ocean. The magnitude 3.5 earthquake on 16 November 2020 occurred just a few kilometres from Ceres, an area impacted by 6.2 Mw in 1969.

Should we be concerned and what is the likelihood of a tsunami?

Although these seismic events were too small to produce tsunami waves (as at least 6.5 Mw earthquake is required to generate a tsunami event [Bryant, 2001]), they did serve as a reminder to South African coastal disaster management bodies that our coast is not entirely immune.

Even though South Africa is one of the countries that form part of the UNESCO Indian Ocean Tsunami Warning System (IOTWS), we maintain no tsunami early warning moorings offshore of the three oceans surrounding our coastline, but the CGS’ national seismic network monitors inland seismic events (http://196.38.235.147:8070/quakeview/). Should there be a tsunami within the Indian Ocean, the primary source of tsunami advisories would come from three tsunami warning centres located in Australia, India and Indonesia (http://iotic.ioc-unesco.org/indian-ocean-tsunami-warning-system/tsunami-early-warning-centres/57/regionaltsunami-service-providers).

The first two seismic events along the South African coast on 26 September 2020 sparked fear and curiosity among residents and coastal managers. The USGS released an advisory, warning residents to exercise some caution due to possible tsunami waves, but later issued a second statement to assure the South African public that no damages nor tsunami waves were expected.

This was verified by sea-level data recorded in the UNESCO sea-level station monitoring facility located at Marion Island and the South African Weather Service (SAWS) (Figure 4). The fact that there are no real-time tsunami warning moorings offshore of our coastline is a concern, which prompted a virtual meeting with representatives from SAEON, CGS, the SA Navy Hydrographic Office, the National Disaster Management Centre and SAWS.

While it is understood that coastal hazards such as tsunamis and storms are unavoidable natural hazards, there is a need for a more focused approach towards establishing a real-time tsunami early-warning system for South Africa. However, the deployment and maintenance of these instruments is a considerable challenge that will require dedicated effort. A workshop to discuss these options is planned for 2021.

Learning from the past to predict future events

While instrumental observations and eyewitness accounts are important to interpret modern events, field investigations of geological and geomorphic evidence such as sedimentological and erosional features are crucial to provide reasonable estimates of the magnitudes and frequency of past extreme marine events, especially in coastal areas that lack historical records.

Although the South African coast is not known to have been affected by large tsunami events, it is exposed to local submarine landslides and tsunamigenic subduction zones of the Indonesian and South Sandwich Islands (Kijko et al., 2018). To investigate the evidence of Late Quaternary events, we collected sediment cores from five estuaries (Swartkops, Kabeljous, Kromme, Keurbooms, Berg and Verlorenvlei) and dunes at Dwarskersbos along the South African coast (Figure 5). 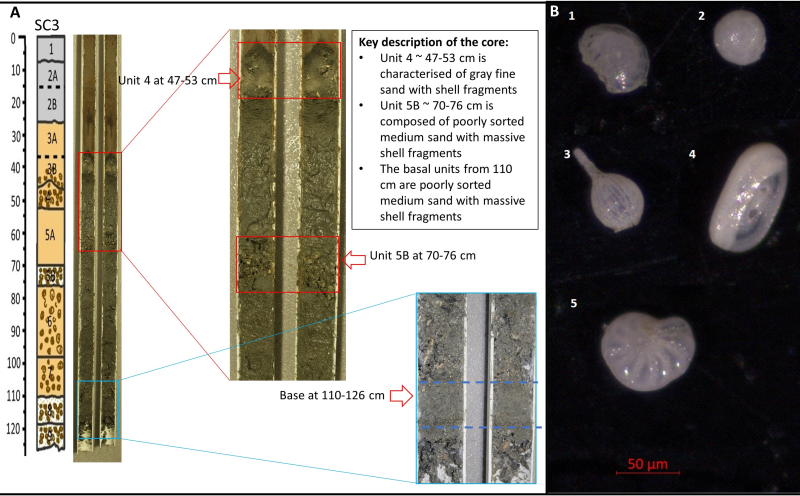 The preliminary results show anomalous sedimentary deposits with shell fragments and mixed assemblages of marine and estuarine foraminiferal species with fragmented and abraded individuals (Figure 6). These are consistent with tsunami deposits reported elsewhere, but without geochronology data we cannot yet conclude on the timing and recurrence intervals of these deposits.

We anticipate that findings from this PhD research and establishment of a tsunami early-warning monitoring system have the potential to assist in the development of extreme coastal hazards mitigation plans for the ever-growing coastal population of almost eight million people living along the South African coast. This will address #GlobalGoal11 of the Sustainable Development Goals of ‘making cities and human settlements inclusive, safe, resilient and sustainable’.

*  Mw is the Richter scale which estimates the amount of energy released during the fracture. 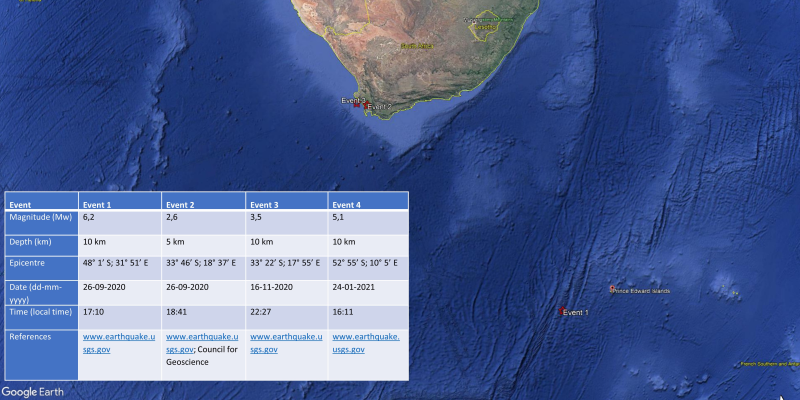 Figure 3. Google map showing the epicentres of the four seismic events along the South African coast, with the table showing each event. 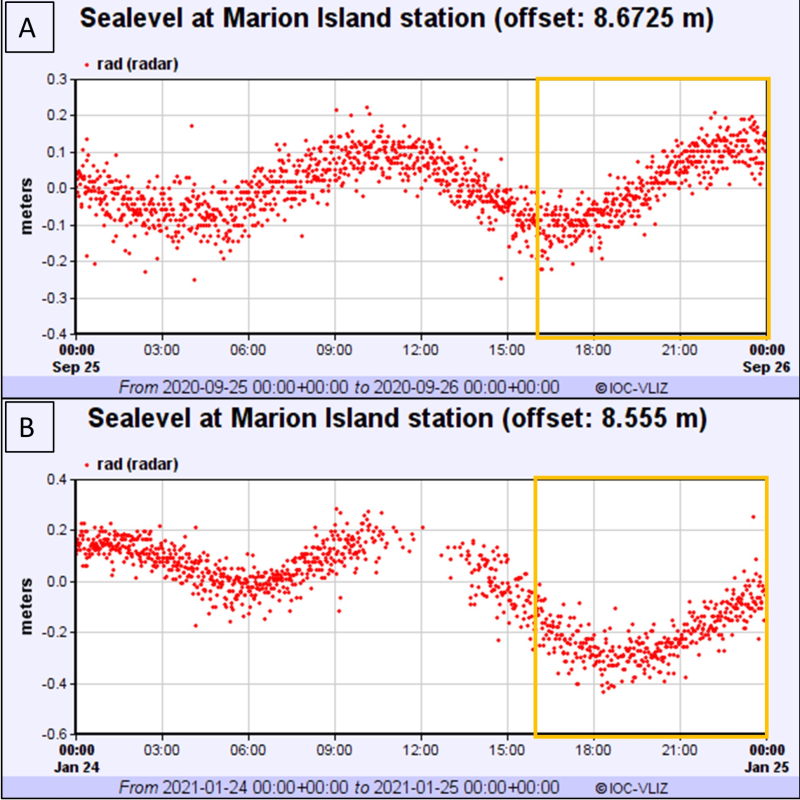 Figure 4. 24-hour sea-level data before and after the a) 26 September 2020, and b) 24 January 2021 events from the UNESCO sea-level station located on Marion Island. (Source: ioc-sealevelmonitoring.org/station.php?code=mais) 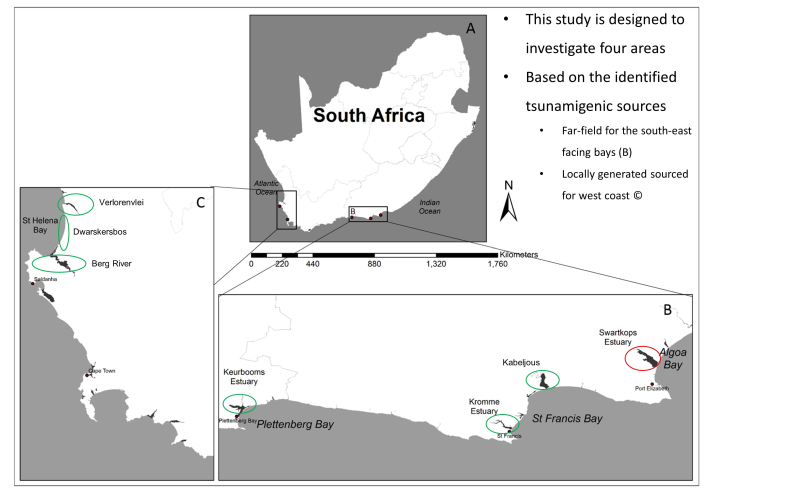 Figure 5. Map showing the study sites of the current PhD project along the South African coast. Data is only presented for the site circled in red; no data is presented for sites circled in green.