The Egagasini Node coordinated the programme for the event. Dr Ramontsheng Rapolaki kicked off the proceedings with an interesting discussion on ‘what science is’ and ‘how science works’. Dr Rapolaki, an expert in ocean and atmosphere (climatology and meteorology), used tropical cyclones as examples to illustrate the science method, define key scientific concepts and share valuable information about the different steps in the scientific process. The budding scientists learned about the importance of making observations, asking questions and collecting data.

To complement this, SAEON’s science engagement intern, Caitlin Ransom, facilitated an interactive session with learners on data in the classroom by using data-visualisation activities. Learners were able to see how data is interpreted by making their own calculations and answering questions on the data provided.

Tania Duba, a former SAEON Kid and PhD candidate, highlighted the significance and application of science in everyday life in her presentation. Illustrating the use and importance of the scientific method outside conventional sciences, Tania showed the learners how science was for everyone and could be traced from the kitchen to courts of law.

Following this, the Egagasini Node’s science engagement officer, Thomas Mtontsi, facilitated conversations between learners, science experts and role models. This presented an opportunity for learners to meet and put questions to women in science such as Dr Maogabo Ragoasha (lecturer at the University of Cape Town’s Oceanography Department), Kolisa Sinyanya (final year PhD candidate) and Thando Mazomba, who recently returned from an Antarctic expedition. Thando concluded the conversation by sharing pictures of her Antarctic expedition experiences.

Rebotile Matabane, a SAASTA (South African Agency for Science and Technology Advancement) volunteer hosted at the Elwandle Node, introduced the learners to the March Mammal Madness online tournament focused on simulating combat between mammals. The aim of the tournament is to inspire advocacy for conservation and protection of biodiversity through exposing learners to the battles that are decided by a combination of scientific research and an element of chance.

Learners are expected to make important choices when they get to grade 10, including whether to continue the Science Stream with key subjects like mathematics and physical sciences, or to go with commerce. It is important to empower these young minds with valuable information and to expose them to science and scientists.

Finally, as a science engagement practice, learners take a diagnostic quiz to help measure the impact of the programme. At the end of this event, learners were encouraged to give their feedback as part of the evaluation. 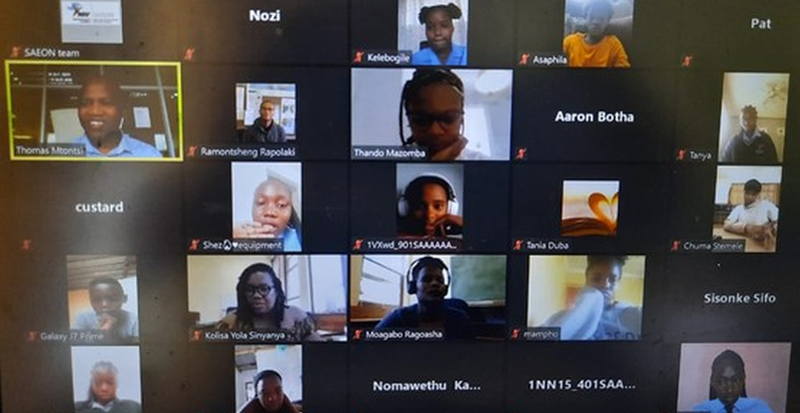