This anomalous event was tracked by a team from the National Oceans and Coastal Information Management System (OCIMS), who observed the mass mortality to have coincided with the presence of a marine heat wave, an Agulhas Current meander, an extreme drop in coastal ocean temperatures as well as high algal bloom activity.

As a result, the Department of Forestry, Fisheries and the Environment (DFFE) promptly released an announcement cautioning locals against collecting and consuming the washed-up species given the threat of poisoning due to a possible harmful algal bloom. 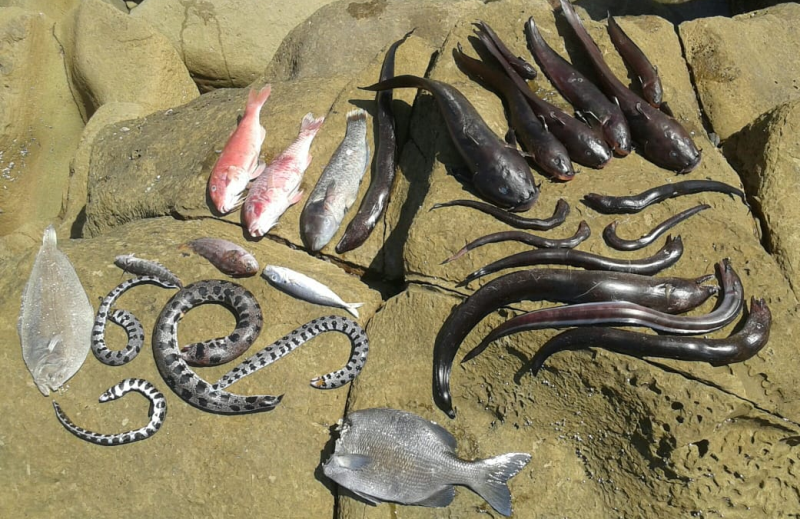 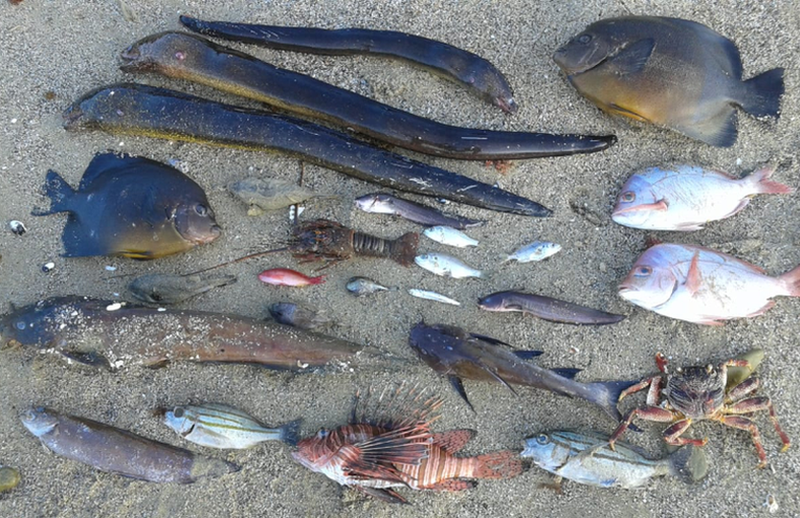 The various subtropical marine species that washed up along the east coast near Tshani-Mankhosi. These photos were taken by Warren Hudson, a local fisher and spaza shop owner.

Operational tools providing routine daily updates on the state of the ocean, developed by SAEON’s Egagasini Node for DFFE, were used by the OCIMS team to remotely track the event. The marine heat wave tracker tool was developed from satellite sea surface temperature data and was used to track the progression and duration of the heat wave.

A tool that tracks the position of the warm and intense Agulhas Current along our east coast was derived from satellite sea surface height data. It was used to determine the location and southward progression of the Agulhas Current meander that is thought to have had a role to play in this marine heat wave, as well as in the inshore presence of the cold water.

The OCIMS Fisheries and Aquaculture Decision Support tool was used to monitor the algal bloom activity, which was found to be high, suggesting that the risk for harmful algal blooms was also considerable.

Agulhas Current meanders are associated with rapid and drastic changes in temperature, ocean currents and biochemistry of the water at the coast. As meanders approach, they cause an intrusion of warm water at the coast, which soon after is followed by the presence of cold water that has been uplifted or upwelled from the deep.

The presence of the cold water at the coast can be amplified by the presence of strong and constant north-easterly winds, which is something that both the local community and members of SAEON’s Elwandle Node commented on having observed. This cold water, which is nutrient-rich, can promote the growth of algae, which, if given the optimal conditions, could turn into harmful algal blooms. There have been no reports mentioning the presence of such blooms, but it always something to consider.

According to Professor Tommy Bornman, manager of SAEON’s Elwandle Node, it is believed that the rapid temperature change, brought on by the combination of the marine heat wave, the Agulhas Current meander and the strong persistent winds, likely caused the marine species to suffer thermal shock, which could have led them to try escape the cold water, resulting in the observed ‘walkouts’.

Research collaboration between civilians and researchers

While marine species ‘walkouts’ are relatively common on South Africa’s west coast, they are hardly ever observed on the east coast, with this being the second time in eight years that such a ‘walkout’ has been observed by the community.

Experienced fishers from the Tshani-Mankosi community in the Transkei believe that the event was caused by the stronger than usual prevailing easterly winds that blew for seven days prior the marine species ‘walkout’. The fishers suggest that the wind caused the sudden (less than 24 hours) and steep drop in sea surface temperature, which ultimately led to the ‘walkout’. Moreover, locals stated that the species they observed were washed up alive into the rock pools, implying that they were not poisoned.

Accounts from local fishing communities on such events highlight the opportunity for research collaboration between local civilians and scientific researchers, which would integrate the relative strengths of systematic, experiential and scientific information. Such research collaboration is extremely useful in providing a teaching and learning platform between resource users and scientific research, which may help to reduce the chances of misunderstanding or conflicting ideas.

In addition, the local knowledge of such fishing communities could play an important role in identifying and shaping scientific research questions, as well as areas where observations should be prioritised. 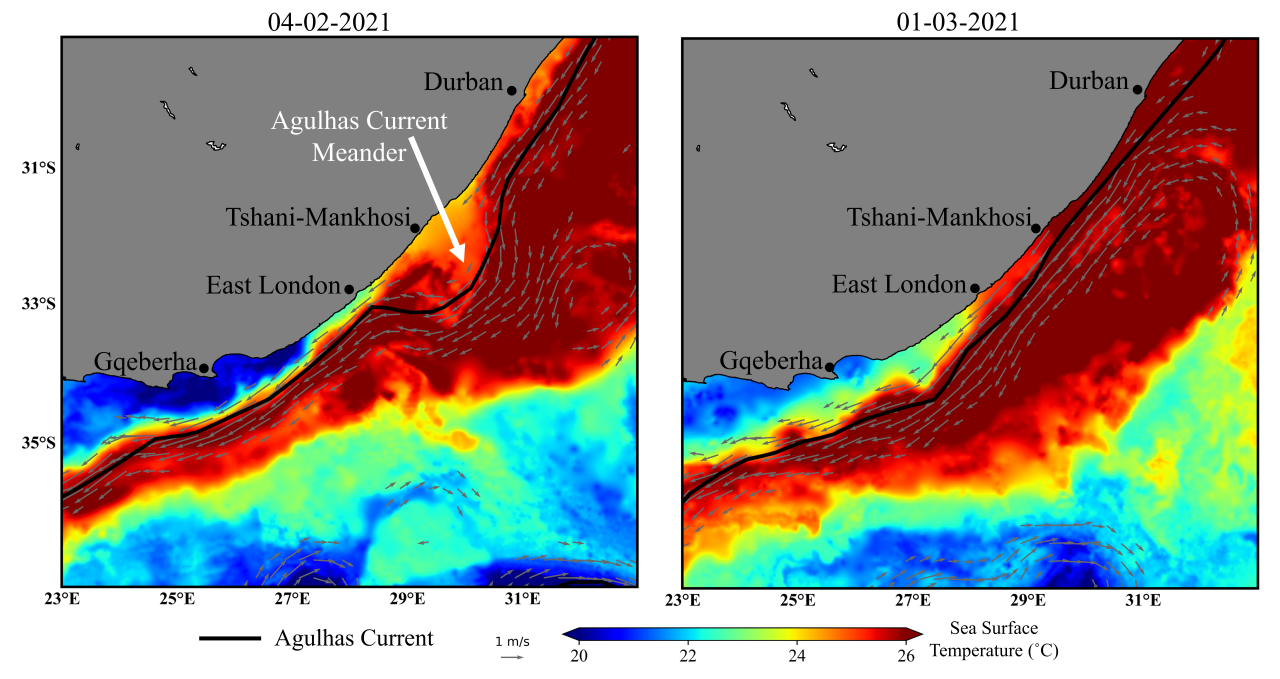 The figure shows the Agulhas Current meander on its downstream journey along the east coast past the Tshani-Mankhosi fishing community. The passage of the meander is linked to the presence of cooler waters at the surface along the coast, which can be exacerbated by strong and prolonged north-easterly winds.