From beyond the grave: Elephant impacts on savannas even after death

In marine ecosystems the decay of an individual whale carcass can transfer around two tons of carbon and half a ton of nitrogen to the ocean floor in a single pulse. These ‘whale falls’ enrich the nutrient-poor deep-sea to create patches of increased productivity and biodiversity that have been shown to last for decades.

In terrestrial ecosystems much is known about the role played by the largest land animal, the African elephant, through the course of its life in engineering savanna structure through, for example, the felling of large trees (Fig. 1). However, we know nothing about how the nutrients derived from a multi-ton elephant ‘megacarcass’ (Fig. 2) will percolate through the various aspects of savanna ecology and if this will, similar to a whale fall, create long-lasting hotspots of biodiversity and ecosystem function.

Figure 1. In life, elephants are described as ecological engineers because they physically change habitats by, for example, pushing over trees. Can these megaherbivores impact savanna ecology in death as well? (Photo: Deron Burkepile)

A team of researchers from the University of California Santa Barbara (UCSB), Utah State University and Marquette University, along with local partners in the Kruger National Park (KNP) and from SAEON, believe that the decay of even a single elephant carcass, because of its large size, can be significant in creating heterogeneity in the composition and ecological processes in savannas. The team brings together complementary experience and substantial expertise across multiple trophic levels in savanna community ecology, as well as mentorship and broader impact implementation.

Initial rapid (soft tissue decay) and slower (weathering of bones) increases and then subsequent decreases in soil nutrients at a carcass site are expected to underpin a succession in the plant species growing at the site, as well as the nutritional value of those plants as a food source for herbivores (Fig. 3). Much like applying fertilizer in a more familiar agricultural setting, the nutrient status of the soil can determine not only what plant species will grow, but also how well they grow and their eventual nutritional value.

Figure 2. The nutrient pulse entering the soil at the site of a megacarcass such as a dead elephant is significant. These nutrients – primarily carbon and nitrogen, originate from the decay of soft tissue and the excrement of scavengers (Photo: Dave Thompson) 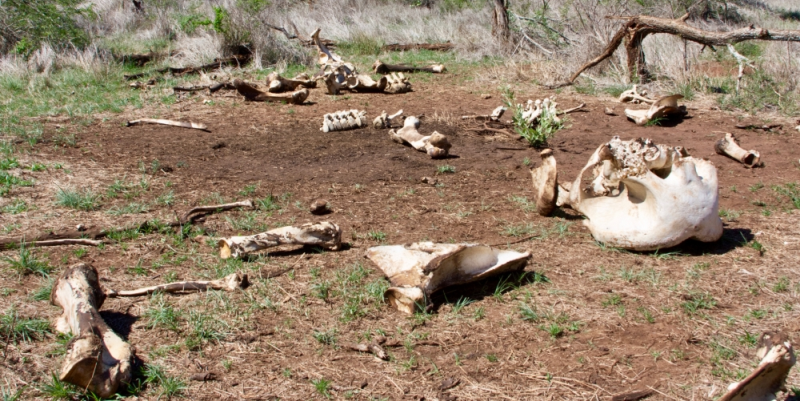 Figure 3. The bare area of soil at this carcass was created by decomposition and disturbance. Researchers expect the altered soil fertility to drive a succession of plant colonisation and ecological processes that make these sites ‘hotspots’ of biodiversity and ecosystem function within the savanna landscape (Photo: Deron Burkepile) 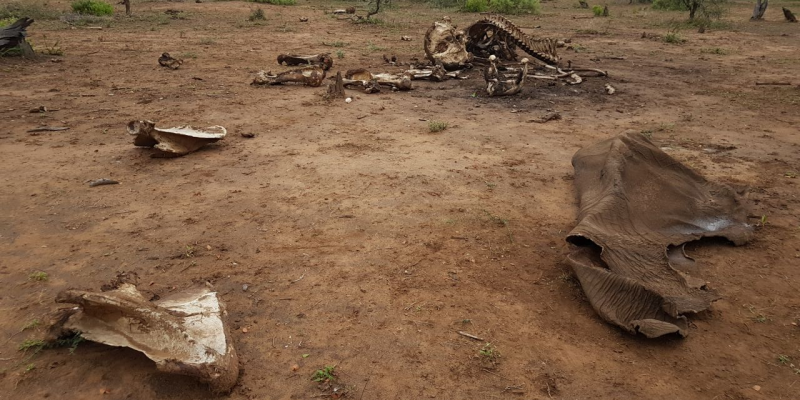 Figure 4. Megacarcasses have the potential to create impacts that are large in both extent and longevity, possibly lasting decades (Photo: Cathy Greaver)

In a system where megafauna such as elephant still exist, including the KNP study site, these enriched carcass sites – together with the species and processes that they support, will then appear in, and disappear from the savanna landscape over the course of decades. Scaled up to account for elephant densities, annual mortalities (the rate of carcass ‘production’) and the longevity of impact at individual carcass sites, the number of such hotspots ‘active’ at any given time quickly adds up.

Phrased differently, savannas deficient in megafauna, as is currently typical outside of protected areas, lack this potentially significant source of nutrient input and driver of system dynamics and diversity.

Other nutrient-derived hotspots in savannas, which include termite mounds and grazing lawns (Fig. 5), are well-recognised as benefactors of biodiversity and ecosystem function, supporting unique plant communities and serving as high-quality forage areas for herbivores. What sets carcasses-site ecology apart is that the nutrient input is a once-off pulse, rather than being continuous, and so the carcass footprint in the landscape is transient. In the case of a megacarcass, that nutrient input is large, with the extent and duration of impact therefore likely to be large also (Fig. 4). 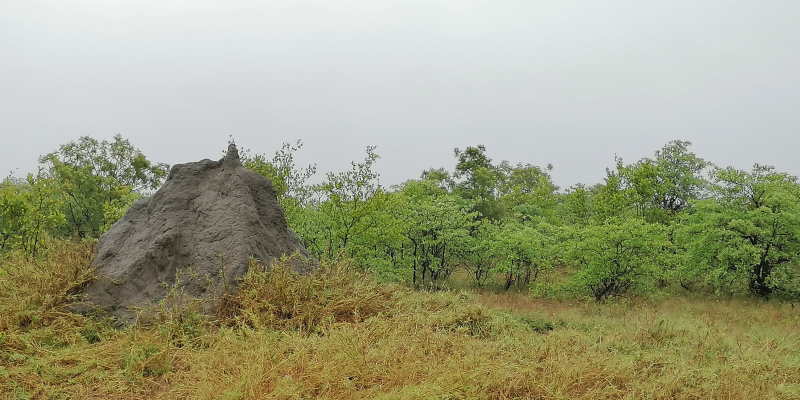 The project in its current form, which will start on-site activities in 2022, has benefited from ongoing refinements guided by team inputs over many years. SAEON scientist Dr Dave Thompson and SAEON research associate and UCSB faculty Prof. Deron Burkepile first conceived the idea back in 2011 and developed the concept further with the collection of preliminary soil chemistry and plant community data from a handful of carcass sites in 2014. The patterns that emerged from these early data supported the researchers’ initial ideas on the possible impacts of elephants after death and provided the motivation behind the current project.

The team will work across KNP identifying carcasses of varying ages – from recent (weeks or months) to those older than a decade. This is possible thanks to a unique set of location data comprising GPS coordinates recorded for elephant carcasses encountered by park rangers. Because the carcasses chosen will vary in age, the time since the nutrient pulse (death and decay) varies, essentially providing the project the opportunity to retrospectively look at what is essentially a long-term nutrient-addition experiment.

In the years to follow – with the project funded for three years by the US National Science Foundation, the team will sample the soil for nutrients and microbial activity, will sample vegetation for nutritional value and will survey the plant and herbivore communities around the site of each carcass. Findings for each site will be compared with those from a control area adjacent to each carcass.

Read another article marking the launch of this project, published in The Current – the university news platform for the University of California Santa Barbara, here: The Circle of life

The Place where the Elephants die!

Hidden away from the haunts of men, west of a widespread lake
Out of the scope of human ken, in a tangled thicket and brake,
Mid arching trees where the foetid breeze ruffles the ragged sky
Elephants come to die.

Many a mighty Lord of Herd, massive of tusk and limb
Has crept away at the whispered word that signified death to him –
Driven by doom to the murky gloom where the wheeling vultures fly,
Through buffet and blast he has come at last to the place where the elephants die.

Pile upon pile of bleaching bone, and a foul, miasmic breath
With now and again a mighty moan to break on the hush of death –
Sluggish streams, and silver beams of a silent moon on high –
God forfend I should meet my end in the place where the elephants die!

Once, they say, in the olden days a venturesome man set forth,
Threaded a path by devious ways, westward and south and north
Dallied with Death at every breath while many a moon went by
Till he found the brake by the Silent Lake where the Elephants come to die.

Tusk upon tusk lay whitely there, under a twisted tree
Wealth of the world, bleached stark and bare – and he gazed upon his fee
Dreaming the dream of a mighty scheme – and ambition fluttered high
Till he sank, and slept – and the rumour crept through the place where the elephants die.

But the elephant clan were close at heel – for the place was theirs to hold,
Sacrosanct to the common weal, out of the mists of old –
And the word went forth south to north, and the herds came thundering by
To kill the man who had braved the clan in the place where they came to die.

Only a local tale, you say, laughing in light disdain?
Maybe so – but what avail to jest when the facts are plain?
Let’s hint who found on his camping ground or under the open sky
One elephant dead then shake his head at “The Place where the Elephants die!”