In October, the SAEON Science Engagement team launched their new Blue Schools programme with two learner workshops. Blue Schools is an international programme funded by the Department of Science and Innovation in South Africa to improve the level of ocean literacy and Ocean Sciences.

An ocean-literate person understands the seven principles and fundamental concepts about the functioning of the ocean, which enables them to communicate meaningfully and make informed and responsible decisions about the ocean and its resources.

The Blue Schools programme originated in Portugal, where it has been immensely successful. The hope is to replicate the success of the original project in countries all along the Atlantic Ocean, including countries from Europe, Africa, South and North America.

SAEON is responsible for implementing the project in South Africa. The science engagement team will be working with schools from Phalaborwa (Limpopo province), Gqeberha and Makhanda (Eastern Cape province) and Cape Town (Western Cape).

The aim is to get learners of these schools to think about their connections to the ocean, to increase their ocean literacy and to encourage their curiosity and problem-solving skills in designing their own research project.

The first workshop, held virtually on 16 October, introduced the learners to the Blue Schools concept. Mia Strand and Nina Rivers introduced the learners to engaging discussions on their connections to the ocean and the sociocultural ‘services’ the ocean provides us. Nina and Mia are social scientists from Nelson Mandela University who work with communities to better understand our ocean and how to manage this valuable resource.

The next session focused on the seven ocean literacy principles. These are seven important ideas about the ocean that every ocean literate person should understand.

This session followed on nicely from the discussion around people’s connections to the ocean, which encouraged the learners to ask questions and to think about how they are connected to the ocean. Making use of breakout rooms, each group discussed an ocean literacy principle in detail and then shared a few key points with the whole group. This activity aimed to get the learners to think about their influence on the ocean and how the ocean influences them, to start formulating potential ocean-related research questions that they would like to answer.

The second learner workshop was held on 21 October. This workshop focused on the scientific method and guided learners on how to develop a research question.

The enthusiastic youngsters participated in activities to show them how to conduct an experiment and to give them some ideas on how they could collect data to answer their research question. Nutrient data from the Sundays and Swartkops rivers collected by the Elwandle Node provided an opportunity for the learners to work with data and to show that the land and ocean are connected via rivers.

These workshops have inspired the learners, particularly those inland, to think outside the box (or the ocean) when it comes to designing their research projects.

Over the next four months the learners will have to design their own research project (with guidance from SAEON’s science engagement officers and node scientists and technicians) on an ocean-related issue and present their findings at the end of April 2022.

These first few workshops gave the science engagement team the opportunity to make sure that the learners have the knowledge, confidence, skills and resources to ask and answer their research question before they embark on their research project and continue their Blue Schools journey. 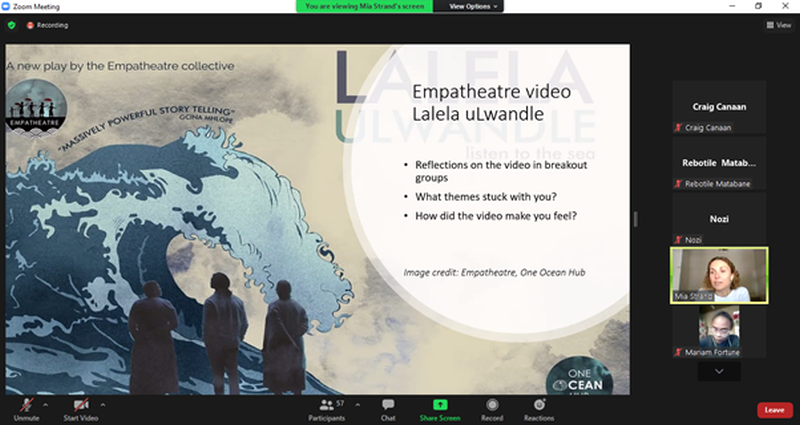 A video, Lalela uLwandle, encourages learners to think about marine issues and the concerns that coastal communities may have