An article by Professor James Blignaut, a SAEON honorary research associate, was published in Daily Maverick on September 28. In the article titled Ominous October, bullion’s silent revolution and the need to remain human, Prof Blignaut cautions that “the past is the only training manual we have. As we revel in the changing of the seasons and the beauty that October brings, we should also heed the lessons of the past – and the October hex that dogs the financial markets”.

An article in Landbouweekblad of October 1, Stofwolk vanuit Afrika ergste in dekades (Dust plume from Africa the worst in decades), mentions the article by SAEON’s Thulwaneng Mashifane published in the August 2020 edition of SAEON eNews, The sky in a haze.

Satellite monitoring beyond the forest edge, an article published in the August 2020 edition of SAEON eNews, was republished in the electronic newsletter of the International Long Term Ecological Research Network (ILTER) and in Science Matters, a publication of the National Research Foundation. Afrikaans women’s magazine Sarie also mentioned the research. The two authors of the article, Jasper Slingsby and Glenn Moncrieff, were interviewed on national environmental television programme 50/50.

Lake Sibaya and the beginning of the Iron Age in KwaZulu-Natal, an article co-authored by Sue Janse van Rensburg, coordinator of SAEON’s Grasslands-Wetlands-Forests Node, was published in Volume 37, No 2 of The Digging Stick, the popular magazine of the South African Archaeological Society. The article looks at new finds from Lake Sibaya which show that farmers did settle in the province during the Silver Leaves phase, perhaps some 200 years before Mzonjani. Lake Sibaya provides local evidence from the very beginning of the southern African Iron Age.

Inspirational Young Women in Science, an article published in Volume 16, No 3 of Quest magazine, features Xolile Mbuyazi, a DSI-NRF intern based at the Grasslands-Forests-Wetlands Node. Quest is a popular science magazine aimed at South African youth. A profile on Xolile was also published in Science Matters, to highlight the role of young scientists during Youth Month 2020. Xolile’s research focus is Groundwater Hydrology. 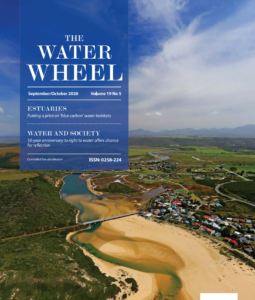 Shallow water river estuaries have provided a rich variety of benefits to humanity for thousands of years. Putting a price on ‘blue carbon’ water habitats, an article highlighting the research conducted by researchers from SAEON’s Elwandle Node as part of a Water Research Commission (WRC) study, was published in the September/October 2020 edition of The Water Wheel, the popular magazine of the WRC. The study has thrown light on the undervalued role of these estuaries in climate regulation and carbon storage.