The Shallow Marine and Coastal Research Infrastructure (SMCRI) celebrated a major milestone in 2022, with the first deployment of underwater temperature recorder (UTR) arrays off the KwaZulu-Natal (KZN) coast as part of the national expansion of coastal long-term ecological research (LTER) sentinel sites in South Africa.

Coastal sentinel sites are areas of intensified research infrastructure investment for the purpose of improved, and sustained, ocean observation over the long term. Information on key Essential Ocean (EOV) and Biodiversity Variables (EBV) is collected continuously with moored instruments, or routinely by means of repeat visits to sampling stations. These long-term datasets reveal trends and ecosystem dynamics, elements which are key to our understanding of variability, responses, resilience and impacts in the context of climate change.

The utility of the sentinel site data products is multifaceted and extends beyond the LTER focus of NRF-SAEON. Data and platforms provide a strong foundation for short-term studies, particularly those led by graduate students.

The strategic location of the sentinel sites and the local extent of the networks give opportunity to validate ocean and earth observation models, all of which culminates into solid support for decision-making in the public domain. To this end, considerable effort and resources are devoted to the serving of sentinel site data products to the end user, in a manner that is efficient and in accordance with the FAIR principles, which advocates for data to be Findable, Accessible, Interoperable and Reusable.

The Algoa Bay Sentinel Site (ABSS), established in 2008, is now the most extensive coastal observation network in South Africa, with 39 active moorings located between Port Alfred and Oyster Bay (>300 km of coast) in the Eastern Cape Province of South Africa. Collectively the network hosts 104 sensors, which over this period have secured > 8 million water temperature records.

Additional ABSS projects actively contributing to the overall data holdings include pelagic ecosystem, sandy beach, rocky shore and benthic ecosystem LTER frameworks that have been systematically implemented over the past 14 years.

The operationalisation of the SMCRI initiative presented an opportunity to build on the successes of the ABSS through the expansion of the sentinel site concept to other parts of the country and beyond. The three additional areas earmarked for deployment are the cool-temperate waters surrounding Cape Town (Two Oceans Sentinel Site), the subtropical coastal waters of the KZN Bight and the sub-Antarctic Prince Edward Islands (Marion Island Sentinel Site).

An important lesson learned from the ABSS case in terms of sustainability, involves partnership. Co-developing and co-managing, with and alongside stakeholders, is a fundamental requirement if one intends to maintain such research infrastructures in the long term. This principle is firmly embedded in the SMCRI operational plan, with the mandatory establishment of Communities of Practice Working Groups for each SMCRI platform, including the sentinel sites.

Engagement with the KZN stakeholders commenced on 11 March 2020. The objective of that meeting was to entrench support for the sentinel site concept and to solicit guidance for its design and implementation strategy. This, along with several additional successful engagements during the COVID-19 lockdown period, led to the successful inaugural deployment of three UTRs along a transect in the vicinity of the Bluff, south of Durban, on 3 February 2022.

With the support of staff from the South African Institute for Aquatic Biodiversity (SAIAB) on board R/V Phakisa (SAIAB-managed SMCRI Coastal Crafts Platform), SMCRI oceanography technicians Imtiyaaz Malick and Jethan d’Hotman deployed UTRs at 30 m, 60 m and 80 m depth respectively. Each mooring line contains multiple HOBO® temperature loggers, fastened at incremental depths (e.g. subsurface 10 m, 20 m, 30 m and so on depending on the depth of the area), to give insight into how temperature varies according to depth along the shelf gradient. 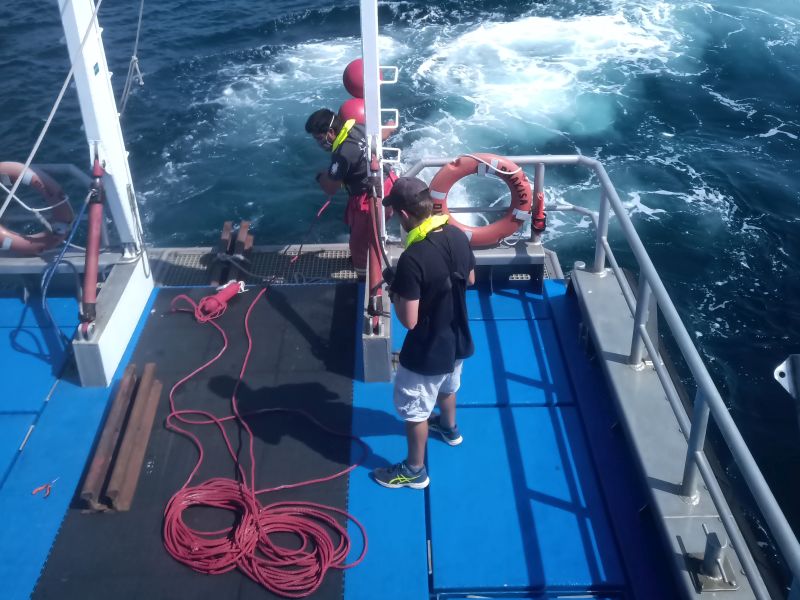 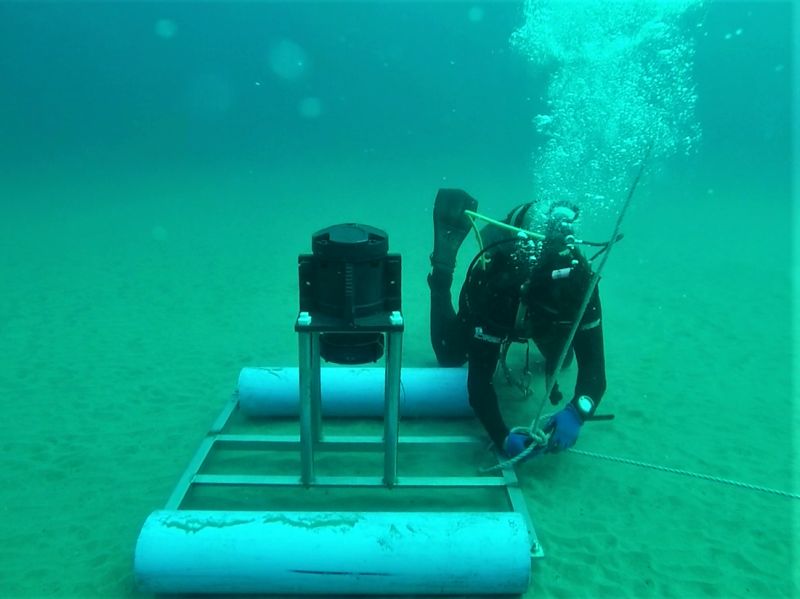 Imtiyaaz Malick attends to the routine maintenance of an Acoustic Doppler Current Profiler (ADCP), here deployed at Red Sands, Northern KwaZulu-Natal. The KwaZulu-Natal Bight Sentinel Site will receive its first ADCP deployment off the Bluff in 2023.

The robustness and relatively small size of HOBO® loggers enable deployment in shallow water as well. Loggers are fastened to a 50 cm long railway line, which is then carefully placed in a rocky shore gully, out of sight of the prying eyes of onlookers. A suitable gully will be shallow (<5 m), permanently connected to the sea and remain submerged, even under extreme tide-level fluctuations. Despite clearly marking the unit with information regarding its purpose as well as contact details, people do tend to remove these units, resulting in the loss of a logger, but also the very important information it carries. During the field team’s initial visit in February 2022, shallow UTRs were deployed near SAPREF, Brighton and Umhlanga respectively. Finding a suitable location can be challenging, especially if not familiar with the area. Once more, the importance of partnerships at this level of operation cannot be overstated. Thanks to the local knowledge of SAIAB staff Thor Eriksen and Thabo Mbuyazi, access points to suitable locations could be identified and the interim resting place of our shallow UTRs occupied.

The HOBO® loggers are configured to record temperature hourly. The data are stored on the logger until the download protocols can be activated once back on land. Although UTRs can technically remain in the water for up to a year or two, for the sake of data security, moorings are replaced and the data downloaded every three to six months.

Once downloaded, a series of workflow actions are activated to ensure the data are cleaned (i.e. erroneous observations eliminated), checked and verified. The SMCRI Data Management team then upload the data to the SAEON Observations Database, where it is published for open and free use by the public.

It was with much relief five months later, that Imtiyaaz Malick and Jethan d’Hotman announced the successful retrieval and redeployment of all three Bluff UTRs. Equally good news was the retrieval and redeployment of the shallow UTRs from SAPREF, Brighton and Umhlanga. Data were of excellent quality and are available for downloading from the SAEON Observations Database (UTR023_BLU30, UTR024_BLU60  and UTR025_BLU80).

Unfortunately, attempts to deploy additional shallow UTRs failed, due to insufficient locations and the prohibition on water activities imposed by the eThekwini Municipality at the time in response to health concerns over poor water quality. 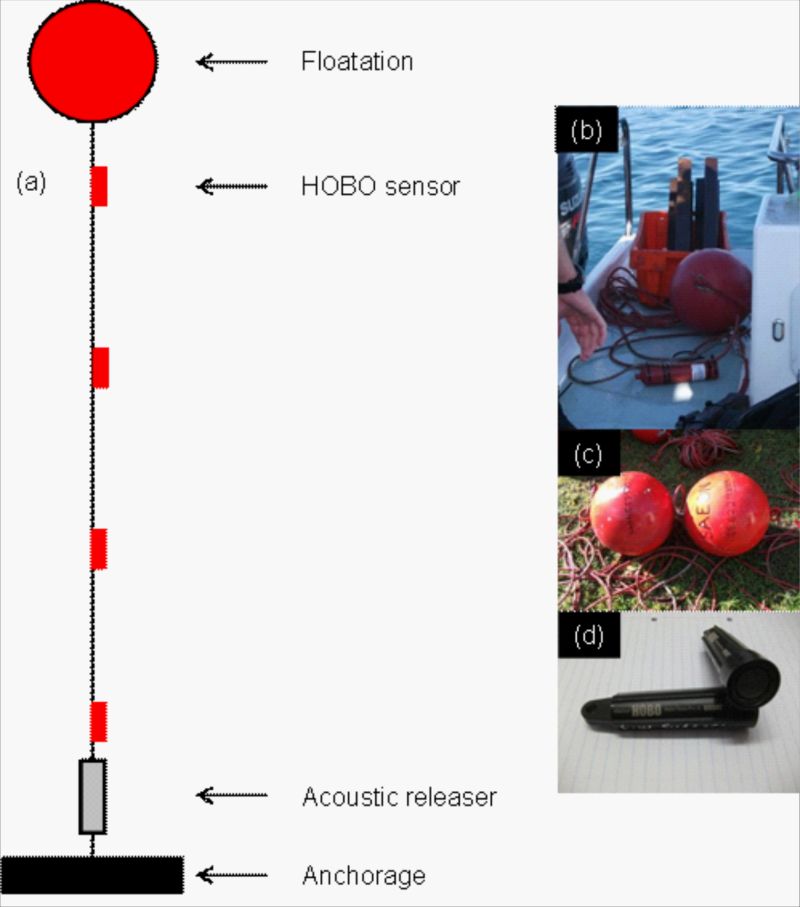 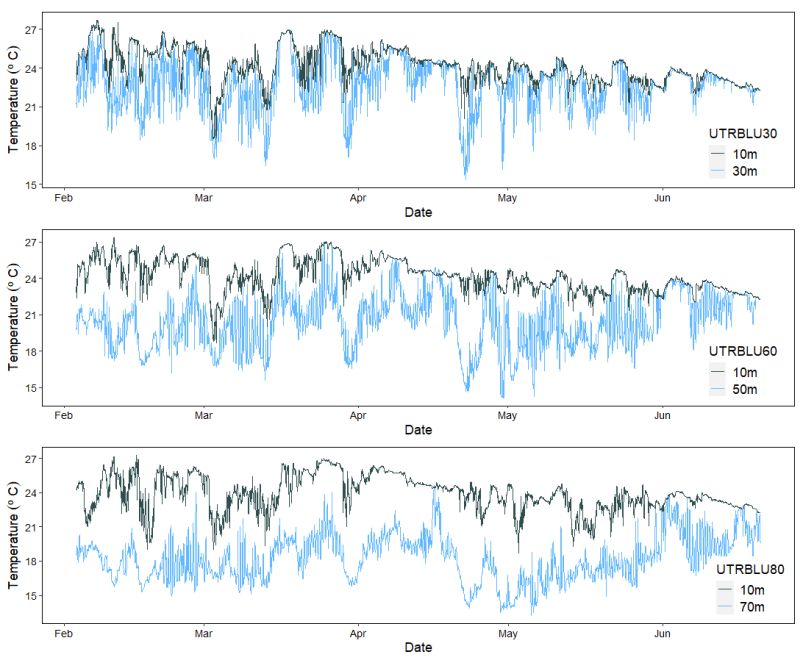 A timeseries expression of data from the first deployment (3 February – 20 June 2022) of three UTRs off the Bluff coast, marking a key milestone in the SMCRI operational framework.

On 1 August 2022, a dedicated cruise up the coast yielded success for the second objective of the deployment phase, namely deploying three UTRs within the Offshore Restricted Zone of the uThukela Marine Protected Area (MPA). Data from these moorings will routinely be submitted to the management of the MPA to assist with their decision-making processes.

A contribution will also be made to the recently launched Blue Action Fund project led by Dr Jean Harris and the WILDTRUST team, named Ecosystem-based adaptation (EbA) to climate change in the Western Indian Ocean. The uThukela MPA EbA project will run for five years until March 2027.

Over the next two years, SMCRI aims to expand on the current network with the deployment of an Acoustic Doppler Current Profiler (ADCP) off the Bluff and at least six additional shallow UTRs between Durban and the uMlalazi Mouth near the northern limit of the uThukela MPA.

A fully equipped METOcean Coastal Data Mooring will also be installed near Durban to enable near-real time data provision and an operational Pelagic Ecosystem LTER programme. The latter will incorporate the ongoing plankton research conducted by Dr Johan Groeneveld and his collaborators. In fact, consensus has already in principle been reached to adopt a number of their sampling stations along the Durban Plankton Line, to ensure we continue the excellent time series maintained until now.

The above objectives will be pursued under guidance from the KZN Bight Sentinel Site Community of Practice Working Group chaired by Dr Jenny Huggett (Department of Forestry, Fisheries and the Environment) and its 16 members, representing five institutions and government departments.