Tracking down the iconic Snow Protea of the Cederberg Wilderness

Combine a suite of unusual ingredients from the natural world, add a pinch of careful planning and adventure, and you may be lucky enough to encounter the enigmatic Snow Protea (also called the Snowball Sugarbush) of the Cederberg Wilderness in full flower. But what exactly makes the Snow Protea, Protea cryophila, such an intriguing species?

These three Snow Sugarbushes look slightly different in growth habit, have disparate geographical distributions and differing flowering times. In particular, the more common species is P. scolopendriifolia which occurs at relatively low elevations, is generally restricted to shaley soils and produce much smaller flowerheads than its two sister species.

As the botanical name implies (‘cryophila’ = lover of cold), the Snowball Protea occurs in a narrow, high-altitude habitat (1 700–2 000 metres above sea level) that would often be covered by snow during the Cape’s cold winter months. This Snow Protea occurs in a restricted geographical area (<50 km2) which is characterised by a largely alpine climate, although summer months can be very hot and dry in the Cederberg region (see SAEON’s high-altitude Cederberg weather station – http://lognet.saeon.ac.za:8088/EngCed/index.html). 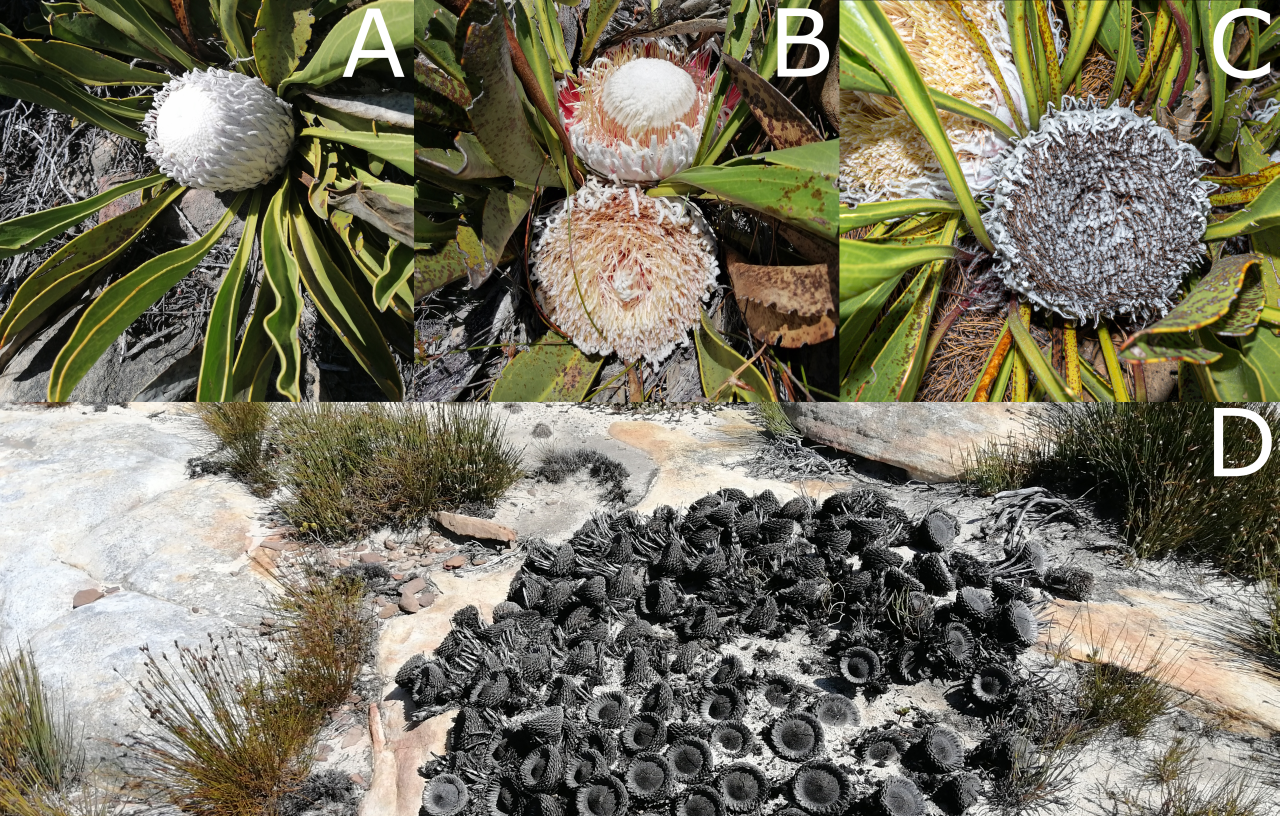 The Snowball Protea (Protea cryophila) of the Cederberg Wilderness: Flowerheads showing the different stages of flowering (A: closed flowerheads; B: open flowerheads; C: dry flowerheads that become cones storing seeds in the plant canopy) and a burnt skeleton of an adult plant (D) showing hundreds of old cones that released their seeds after the last fire. (Photos: Martina Treurnicht and Harry Randell)

It is often the only Protea species one would encounter on the very highest peaks of the Cederberg Mountains, growing on sandstone outcrops and rocky ledges. The narrow geographical range and perceived dependence on cold climatic conditions suggest that this species should be sensitive to ongoing climatic change, potentially serving as an indicator plant species to evaluate the effects of climate change in high-altitude environments of the fynbos biome.

The common name (Snowball Protea) pertains to the spectacular flowerheads (inflorescences), which are snow white and densely covered in hairs. Plants are tufted and the large flowerheads are borne at the base of plants, often hidden by several large, ascending leaves.

The flowerheads can take up to a year to develop, starting out as small buds that eventually turn into large, cup-shaped flowerheads. Once these grand flowerheads start to open, usually during late summer (January – March), a pink-carmine appearance is evident – a direct contrast with the rugged mountain habitat of this species. The opening of flowerheads is a gradual process and emits a distinct, yeasty odour which, along with the positioning of flowerheads (at the base of plants), suggests that the species is likely rodent pollinated.

Moreover, Protea cryophila is ‘serotinous’ and follows a life cycle that is connected to periodic fire. After flowering, the flowerheads turn into fire-protected woody cones and plants accumulate long-lived canopy-stored seedbanks. Adult plants are usually killed by fire (i.e. the species does not resprout from fire-protected buds or meristems as some other Protea species) and fire triggers the release and dispersal of seeds from cones.

The germination of seeds follows cool, wet winter months and the recruitment of new seedlings is confined to the first few years after fire. It is thus a delicate combination of factors such as flowering, pollination, timing of fire (frequency and seasonality) and the post-fire weather conditions that shape the niche of this species. 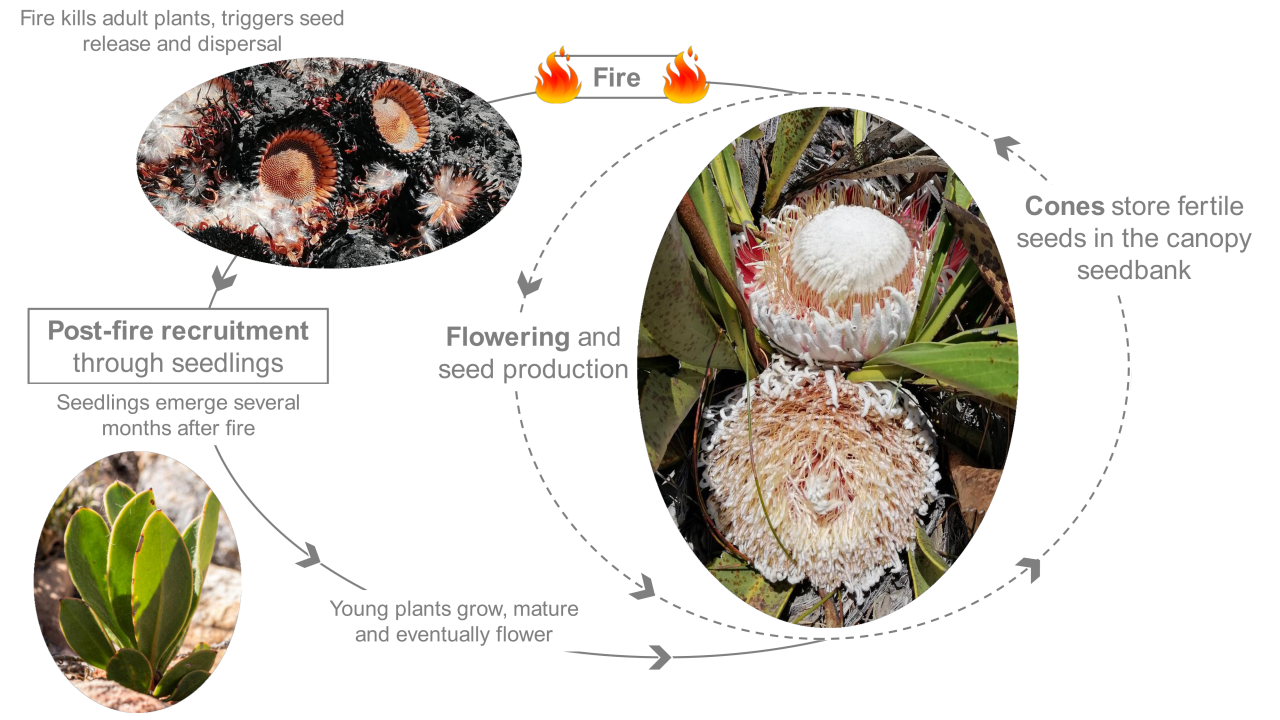 The fire-driven life cycle and demographic characteristics of the Snowball Protea, Protea cryophila, a serotinous nonsprouting species that is endemic to the Cederberg Wilderness. (Photos: Martina Treurnicht and Harry Randell)

Following in the footsteps of citizen scientists: tracking down Snow Protea populations

In the early 1990s, the Protea Atlas Project was initiated to map the distributions of all species in the Proteaceae family in Southern Africa. Data were collected by several outdoor enthusiasts, botanists, hikers and researchers collectively regarded as citizen scientists.

For over 10 years, their efforts led to the development of detailed distribution records, which have been the basis of much ecological, biogeographic and global change research in the Cape. These data are also used to inform the conservation status for over 300 Proteaceae species in South Africa, including the Snowball Protea of the Cederberg.

Now, almost 20 years after the completion of the Protea Atlas Project, there is a growing need for long-term studies on endemic Proteaceae species, specifically to study the ecological effects of ongoing global change on high-altitude plants. The future of the Snowball Protea is particularly uncertain given currently changing climate and fire regimes in the region.

Considering the restricted occurrence of the Snowball Protea, and its specific habitat requirements, it could be prone to unprecedented environmental change that may outpace the ability of this species to adapt.

In January 2020, SAEON’s Fynbos Node initiated a project (led by Harry Randell and supervised by Dr Martina Treurnicht, Dr Jasper Slingsby and Prof Karen Esler from Stellenbosch University) to resurvey all historical populations of Protea cryophila from the observation records contained in the Protea Atlas Project. The primary aim of this project is to revisit as many of the historical localities (or observation records) of the Snow Protea, and to compare the historical and newly collected data for any long-term changes.

This should provide information on whether any potential changes occurred over the last two decades across the geographical range of this montane endemic plant and provide insightful information on the long-term persistence of the iconic Snow Protea in the Cederberg Wilderness.