Investigating the drivers of vegetation change in the eastern Karoo

The vegetation of the arid eastern Nama-Karoo is a dynamic complex of a range of life forms, dominated by grasses (mainly C4) and dwarf shrubs (mainly C3). Good summer rains result in flushes of short-lived grasses and, in the longer term, the establishment of perennial grasses.

Dwarf shrubs are less responsive to rainfall both in terms of growth and recruitment but have a longer growing season as they can grow during the cold, frosty months, and are more tolerant of drought. Long-term changes in rainfall cause an ebb and flow between grassy Karoo and shrubby Karoo.

Most of the region is used for extensive livestock production of sheep and cattle, so persistent grazing provides a background disturbance. Animals preferentially consume palatable grasses and shrubs, and these species can be extirpated under heavy grazing.

Unlike other grassy environments, fire is rare in the Karoo mainly because grass fuel loads seldom build up sufficiently to carry a fire and because natural ignitions are comparatively rare. 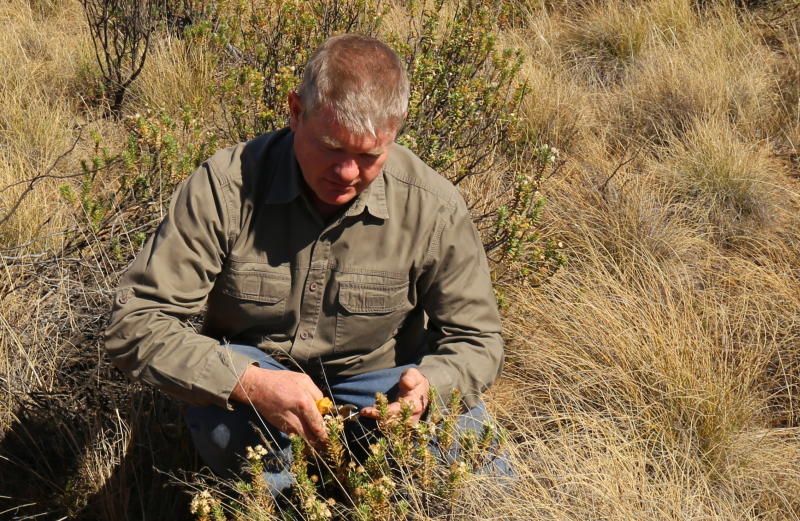 Justin du Toit is a production scientist at the Grootfontein Agricultural Development Institute and principal investigator of the SAEON-Department of Agriculture, Land Reform and Rural Development collaborative project. 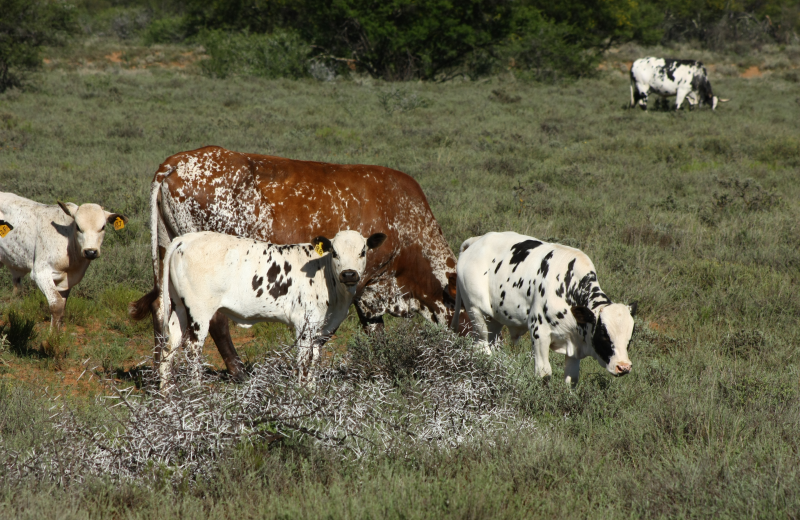 Most of the region is used for extensive livestock production of sheep and cattle. Animals preferentially consume palatable grasses and shrubs, and these species can be extirpated under heavy grazing.

The study sought to examine in finer detail some of the main drivers of vegetation change in this arid region.

A spate of fires arising from high fuel-load accumulations on account of the good rains from 2009–2013 allowed the opportunity to explore how Karoo veld responded to this rare disturbance.

Rainfall was clearly cyclical at the scale of approximately 20 and 60 years. Rainfall has also been higher since the mid-1970s, breaking a long ‘drought’ of many decades. These results are consistent with the general observation of increasing grassiness in the Karoo, coupled with increased productivity especially from grass.

Nama-Karoo vegetation can sustain grazing at recommended stocking, but if grazing is concentrated in the summer months then grasses decline, and shrubs may increase. Under conditions of continued high rainfall, grass will be established and grow despite heavy summer grazing. Under drought conditions, grass populations (and occasionally shrub populations) can collapse despite lenient grazing.

Fire kills certain plant species, some of which are often locally dominant, while most plant species resprout after being burnt. Post-fire shrub growth is slow while grass growth is relatively fast, meaning that structurally fire shifts dwarf shrub or grass communities into temporary sparse arid grassland. 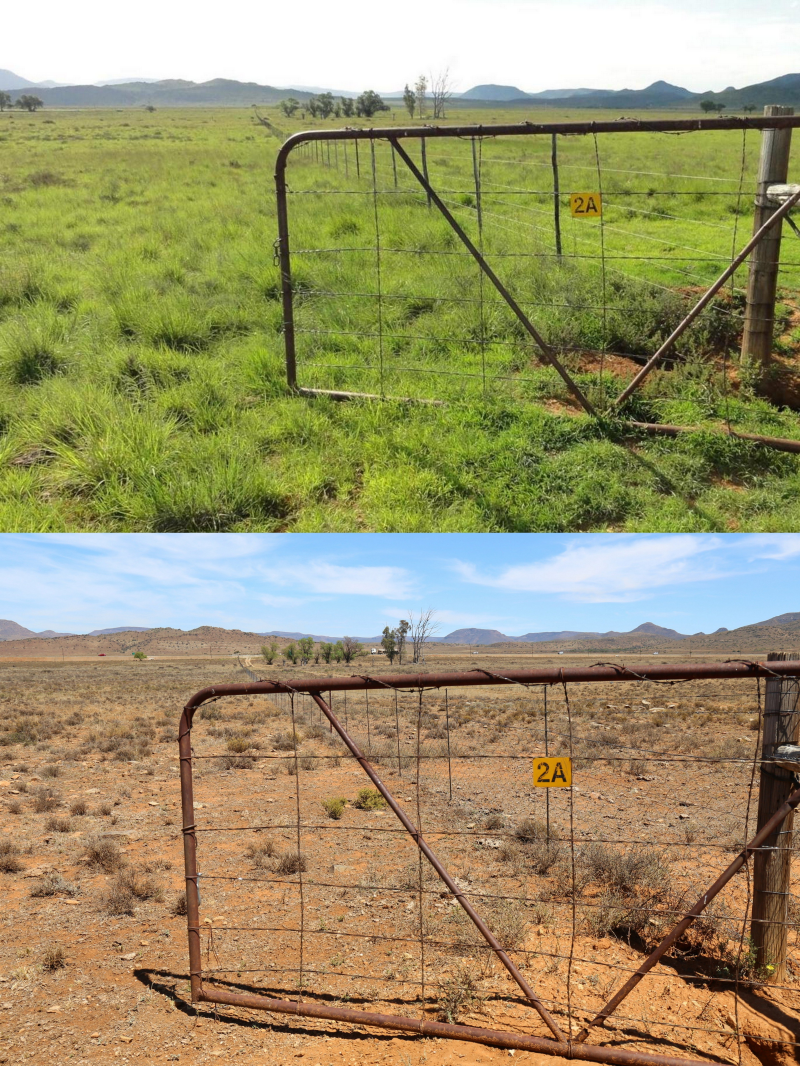 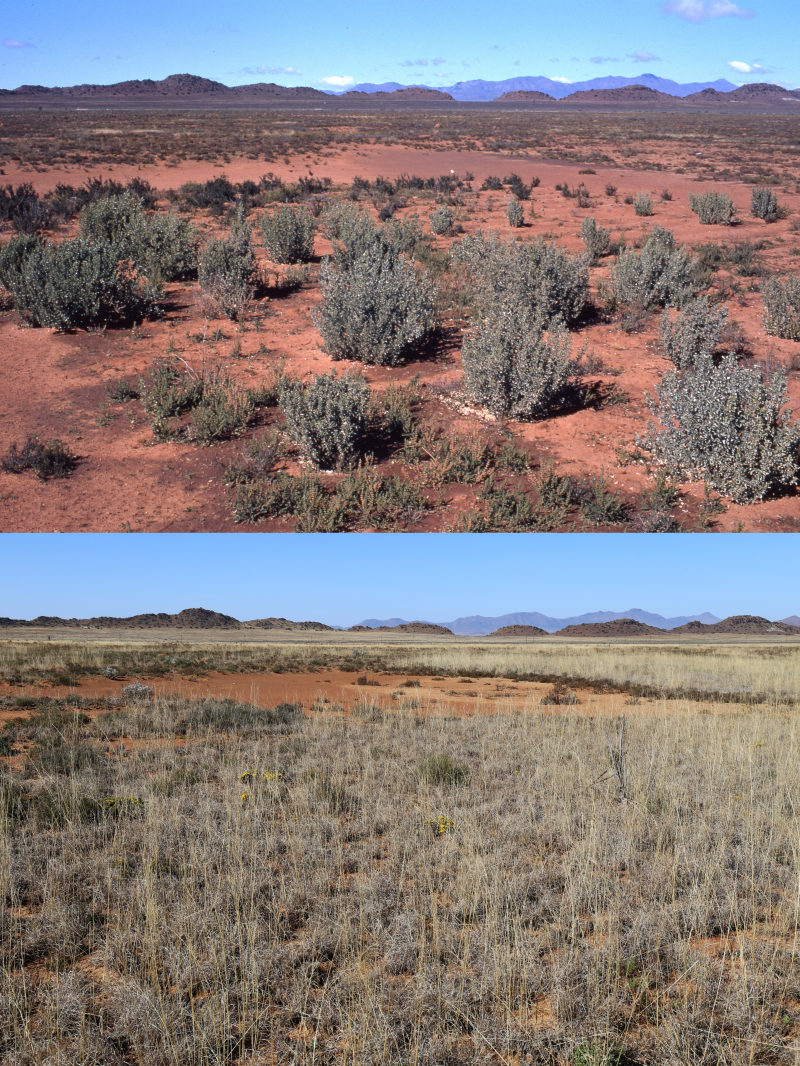 The 1960s and early 1970s were a period of prolonged drought in the eastern Karoo, leading to low plant cover, especially grasses. In some areas, drought-resistant fodder crops were grown (top, 1971). From the mid-1970s rainfall was higher on average, leading to an increase in total perennial grass cover (bottom, 2016). (Images: J du Toit)

Significance of the study

The results from this study provide an improved understanding of the functioning of Nama-Karoo ecosystems. The researchers will be able to refine and update existing state-and-transition models on how climate and disturbances will influence botanical composition.

Additionally, the results can be contextualised into management recommendations for farmers, particularly regarding the importance of rainfall as a driver of veld condition, as well as how farmers should deal with fire as a rare, but possibly increasingly important, disturbance in the Karoo.