An article by Professor James Blignaut, a SAEON honorary research associate, was published in Daily Maverick on June 1. In the article titled Covid-19 has broken our country even further – now it’s time to heal the land, Prof Blignaut argues that now, more than ever, it is agriculture that can bring about the much-needed healing of the land.

SAEON research features in an article published in the April 2020 edition of Veeplaas titled Klimaatsverandering en weiding: Die veeboer se dilemma. According to the article, SAEON has observed dramatic bush encroachment in South Africa’s savanna, grassland and fynbos biomes. The savanna is expanding into the adjacent grassland areas, while the existing savanna areas are changing into dense thickets impenetrable to humans and animals.

Putting the brake on locust outbreaks, an article by Dr Joh Henschel, manager of SAEON’s Arid Lands Node, was republished in the June 2020 edition of Grassroots, the newsletter of the Grassland Society of Southern Africa. The article was also republished in the May 2020 newsletter of ILTER, the International Long-Term Ecological Research Network of which SAEON is a member.

An article titled The ghost of fire regimes past (and future), by Jasper Slingsby and Glenn Moncrieff, was republished in the June 2020 edition of Grassroots, the newsletter of the Grassland Society of Southern Africa.

Celebrating Youth Month 2020, Tamanna Patel, a PhD candidate based at SAEON’s Grasslands, Forests and Wetlands Node, is profiled in a special edition of Science Matters, the magazine of the National Research Foundation. Read the profile here.

Taking stock of the impact of the 2014–19 drought on the biodiversity of Phalaborwa by Dr Anthony M Swemmer and Rion Lemmer, was republished in the June 2020 edition of Grassroots, the newsletter of the Grassland Society of Southern Africa.

SAEON’s Risk and Vulnerability Atlas (SARVA) project featured in a special issue of Science Matters, the magazine of the National Research Foundation. The article, Producing data to help fight Covid-19, describes how a customised version of the SARVA risk profiler for Covid-19 has been developed to accommodate different regions across the country that may face different challenges that are context-specific, as well as allow users to change the thresholds of risk in a dynamic manner such as the minimum number of beds required or the number of medical professionals to cope with the current rate of infection. 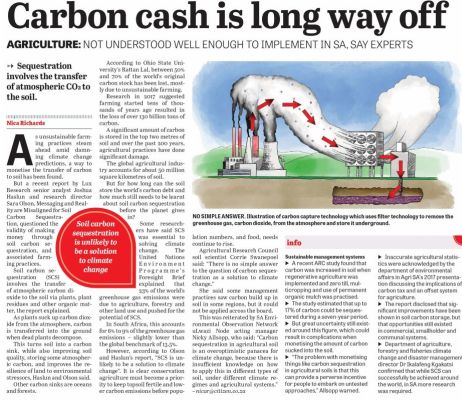 Dr Nicky Allsopp, acting manager of SAEON’s uLwazi Node, is cited in two articles published in The Citizen of May 26. The first article, Carbon cash is a long way off, concludes that soil carbon sequestration is unlikely to be a solution to climate change. In the second article, AgriSA backs carbon offset schemes to promote sustainable farming, Dr Allsopp cautions that it would not be known what impact carbon sequestration schemes would have on the longer term sustainability “until long after the money has been paid”.