A rare fairy shrimp, Pumilibranchipus deserti, was discovered for the first time in South Africa after being recorded only once from a single locality in Namibia during the 1980s. Unfortunately, the location it was found in, Hakskeenpan, is being subjected to major alterations, which might threaten this population in future.

Temporary wetlands (colloquially known as pans) are common features in arid and semi-arid regions of the world. They are defined by their short hydroperiod and are dominated by unique aquatic invertebrates highly adapted to survive transient habitats.

These specialised invertebrates also comprise the primary food source of migratory water birds and therefore act as essential components in the food chain. Through this, pans produce aquatic steppingstone corridors in a vast terrestrial landscape and because they support such unique species assemblages, they contribute immensely to biodiversity.

Despite their ecological importance, pans are under enormous anthropogenic pressure globally. Land-use changes produced by agriculture, urban development and mining have not only deteriorated a large proportion of these habitats but have also led to major habitat and biodiversity losses, with associated species now being threatened with extinction.

Pans are particularly prone to alterations due to the erroneous public assumption that the bare surfaces produce lifeless systems. Still, they remain neglected in research and conservation practices. 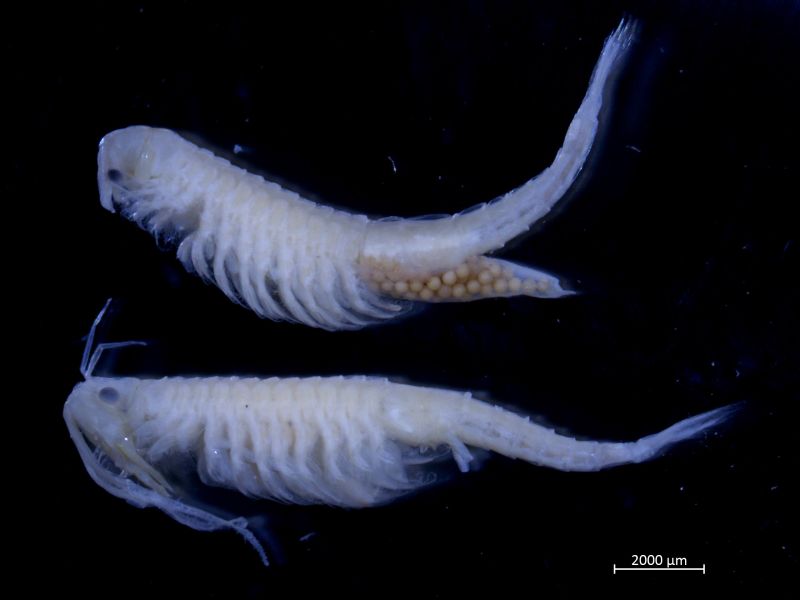 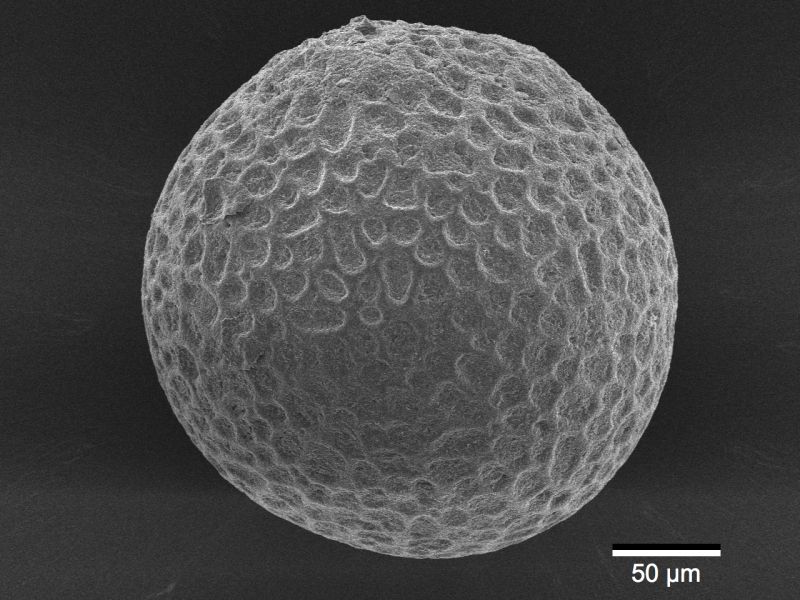 A scanning electron microscope photograph of a Pumilibranchipus deserti egg 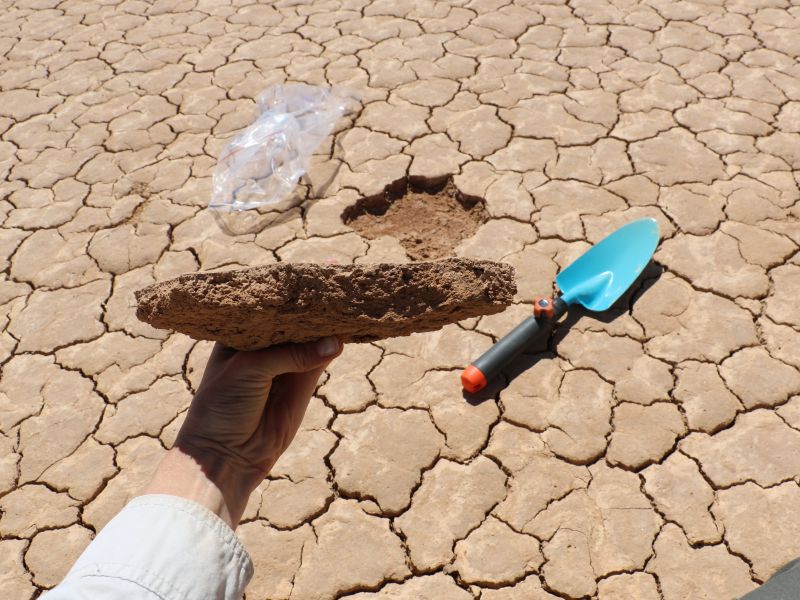 A typical pan crust, in which the egg banks of branchiopods are housed

Branchiopods (freshwater shrimps) are the flagship taxa for pans. They rely on resting eggs to survive extended periods of desiccation.

After a pan is filled with water, shrimps hatch from the eggs produced by the previous generation and mature rapidly. The new adults then produce resting eggs that accumulate in large quantities in the sediment to form a cyst bank before the pan dries up. This cyst bank essentially forms the biodiversity vault of every pan which ensures the continuance of those species that live in it.

Discovery of a rare fairy shrimp

In 2017, the Rietfontein area received sufficient rain for large sections of Hakskeenpan to hold water over a three-month period. Dr Betsie Milne from the Arid Lands Node has been studying the pans of the Northern Cape since 2016 and ventured out to Hakskeenpan during this time for a novel survey of its biodiversity.

All her samples were sent to Musa Mlambo (Department of Freshwater Invertebrates at the Albany Museum in Grahamstown) for taxonomic determination, who discovered that the dominant species found at Hakskeenpan has never been found in South Africa before.

Pumilibranchipus deserti was described and known from a single locality in Red Pond, KauKausib River, Namibia. It was thought to be endemic to this location, which lies 500 km directly west from Hakskeenpan. No other records of it ever being collected since could be found.

This discovery extends the geographical distribution of P. deserti and it is also the second-ever recording of this species. 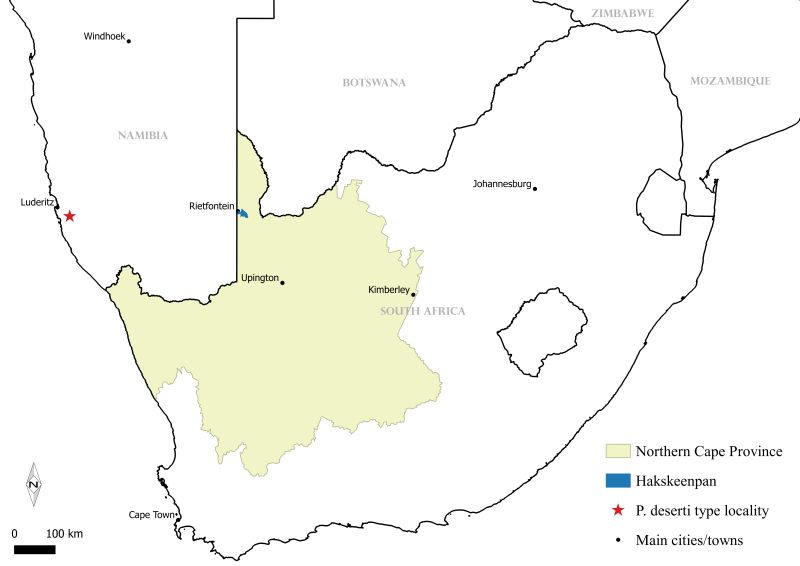 The continuing suitability of Hakskeenpan to host this rare species is questionable in the face of increased impacts associated with the world land speed record attempt.

Apart from the previously mentioned sensitivity of large branchiopods to fluctuation in habitat conditions, their eggs are also vulnerable to crushing. The minute (± 240 µm) eggs cannot withstand any force stronger than 1 N. For perspective, that is approximately the weight of the Freshwater Life Field Guide.

The eggs are packed within the top 5 cm of the crust of the pan. The solidified crust is expected to buffer the eggs from crushing, but any alterations to this crust will immediately release the eggs, exposing them to crushing and erosion.

Consequently, mitigation plans should be established to reduce the potential negative impact of this development on the population of P. deserti. Protecting flagship species such as P. deserti also ensures continual ecological functioning of these habitats, along with other species associated with it.

Rhinobranchipus martensi, another fairy shrimp, was described from a single temporary pool in the Thomas Baines Nature Reserve near Grahamstown in the Eastern Cape Province of South Africa.

When researchers returned a few years after its first collection, before it was even described, they found that the pool it was collected from had been hydrologically modified into a permanent wetland system to serve as a bird sanctuary. This activity permanently annihilated the population of this species in such a way that after 29 years this species has not been found anywhere else, despite intensive sampling in the area.

Read the scientific paper associated with this article here.

Hakskeenpan, a large (15 000 ha) pan near Rietfontein in the Northern Cape Province of South Africa, is one of four major pan systems found in southern Africa, including Etosha in Namibia, Makgadikgadi in Botswana and the Grootvloer-Verneukpan complex in South Africa. When wet, pans attract numerous migratory water birds, including protected species such as Lesser and Greater Flamingo, Chestnut-banded Plover, Maccoa Duck and Greater Painted-snipe. However, due to its size and the low rainfall in the region (average annual precipitation of 170 mm), Hakskeenpan is rarely inundated and for most of the year any passer-by will only see its vast, flat and bare surface. This is precisely why it was favoured for speed racing. From 2009 onwards, a 22 million m2 (20 km long and 1.1 km wide) area has been modified and prepared as a racetrack to attempt a new world land speed record and has since increasingly been subjected to regular speed-week events.