“Last year at a Grasslands Node workshop I asked team members to propose a vision for the node that they would want to see realised. Siphiwe, our node’s technical assistant, came up with a clear statement – he wanted to use community citizen science to improve water stewardship in the Maputaland Coastal Plain. As a manager I am grateful to him for always going the extra mile to make a difference in the communities within which we work. This is his story of how his vision is taking shape.”

Land use in the area is primarily commercial forestry plantations and cultivation of bananas and amadumbe (Colocasia esculenta). Commercial forestry is perceived to be the main source of income for local communities. The area is rich in wetlands containing peat and has about 60 percent of South Africa’s estimated peat resources (Grundling et al., 1998).

Lake Sibaya, South Africa’s largest freshwater lake, falls within the iSimangaliso Wetland Park in the region. As the lake is a groundwater-driven system, its levels reflect the groundwater dynamics. A steep decline in the area’s groundwater and Lake Sibaya’s water level in recent years makes the area vulnerable to water shortages and water-dependent ecosystems are becoming degraded.

The SAEON Grasslands Node has been working in the area for the past few years developing a long-term social-ecological research platform to investigate the relative impacts of land use and climate change in the ecosystem. SAEON has deployed a variety of scientific research equipment to measure trends and detect the key drivers influencing groundwater and lake levels.

Communities from the three tribal councils were engaged in our observations so that they could witness and develop an understanding of what makes their area so vulnerable to a shortage of water supply. To engage the community in science observations in an easily understood format, I introduced the concept of citizen science programmes to community leaders. So far, the Tembe and Mabasa communities have shown a keen interest in this approach. 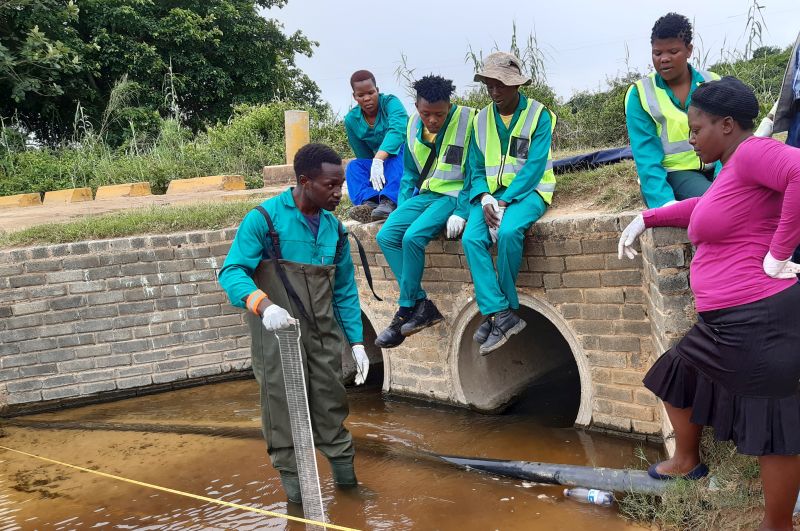 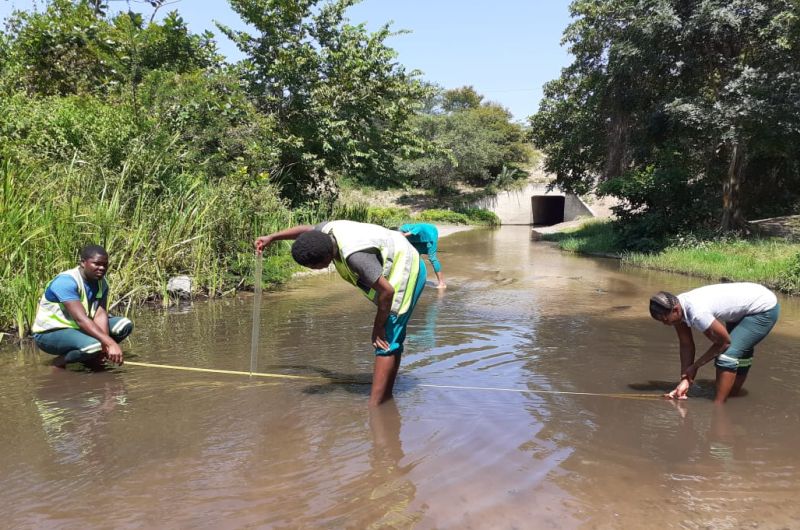 The Mabasa community have been actively working with us for the past few years. Even before SAEON’s engagement with them, they had identified concerns over the status of Lake Sibaya and the environmental degradation in their area. Their effort and interest in environmental monitoring have been significant.

SAEON was tasked by Chief Nxumalo, leader of the Mabasa community, to arrange a workshop to educate his indunas** about climate change and to share with them results from our observations about the state of the lake levels. The workshop was a fruitful interactive session of co-learning. As a result, SAEON was invited to give a presentation to the community about the state of water resources in the area at a World Environment Day awareness event held in June 2019 at Mabasa sport field, to which a range of different stakeholders were invited.

Node coordinator Susan J van Rensburg gave a presentation on global warming at the event and I assisted in the process by interpreting key messages in isiZulu to ensure that the message reached community members in their own language. I gave a talk on the state of water in the area and how the groundwater is an interlinked resource, explaining that land uses five kilometres away can affect the groundwater and lake levels.

The workshop served to strengthen the Mabasa community’s interest in working closely with SAEON on environmental observations in the area and I was able to initiate a citizen science programme with them so that they could be involved hands-on, collecting their own data.

Having grown up in a rural community and understanding the importance of water for both people and wetland ecosystems, I have a passion for sharing knowledge and encouraging community members to understand and look after the water resources on which they depend. In August 2019 I had the opportunity to attend a citizen science workshop organised by GroundTruth in Hilton, where I acquired more knowledge on how to conduct citizen science and on the tools available to do so. 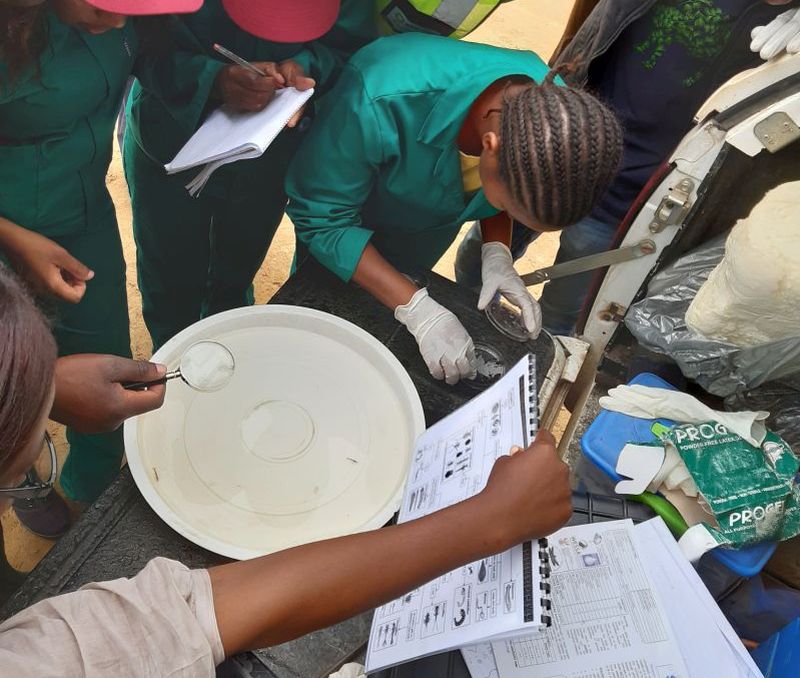 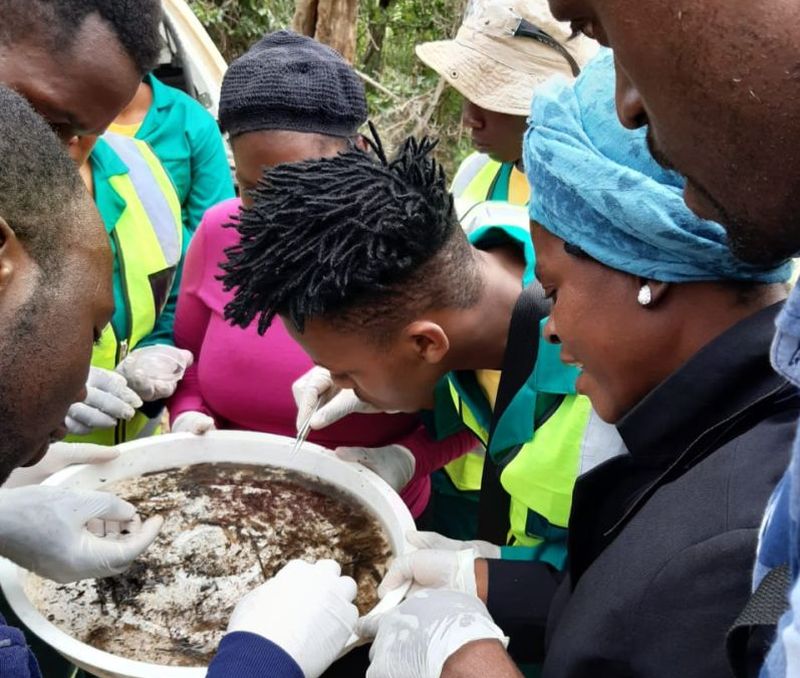 During onsite training, the enviro champs were taught how to use miniSASS to monitor river health and how to ensure the correct recording of data

SAEON donated citizen science tools to the Mabasa enviro champs to enable them to monitor their environment. I conducted onsite training, teaching the champs how to use miniSASS (a simple tool which can be used by anyone to monitor river health), the correct use of the citizen science tools such as clarity tubes and velocity flow planks, and how to ensure the correct recording of data.

The Mabasa enviro champs go out once a week to take flow measurements and monitor water quality and water health at Mseleni Stream using these citizen science tools. Mseleni Stream is an important groundwater discharge zone flowing into Lake Sibaya on the western arm of the lake. A profile was created on the miniSASS web page to upload the data they collect.

I am impressed to see the enviro champs being active in taking care of their environment, identifying problems affecting their ecosystem and taking action. Yet the journey is long. As a result of their citizen science monitoring, they have identified several threats to the Mseleni Stream, such as uncontrolled use by the community of the stream as a picnic site. They are now raising awareness within their community about the threats this is posing to the lake.

Other issues identified were that people were parking their cars, some of which had oil leaks, on the stream bank, as well as litter left on the side of the stream which ultimately got deposited in Lake Sibaya. The champs visit the stream from time to time to educate the community about the danger of polluting the stream. This team is also showing how green jobs can create local employment – they are members of an invasive plant-clearing team in the area funded by Wildlands Trust. 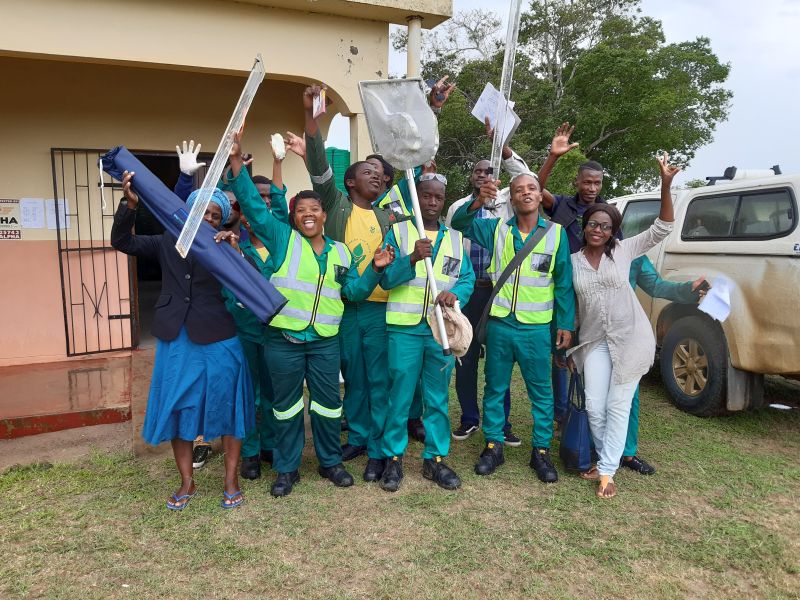 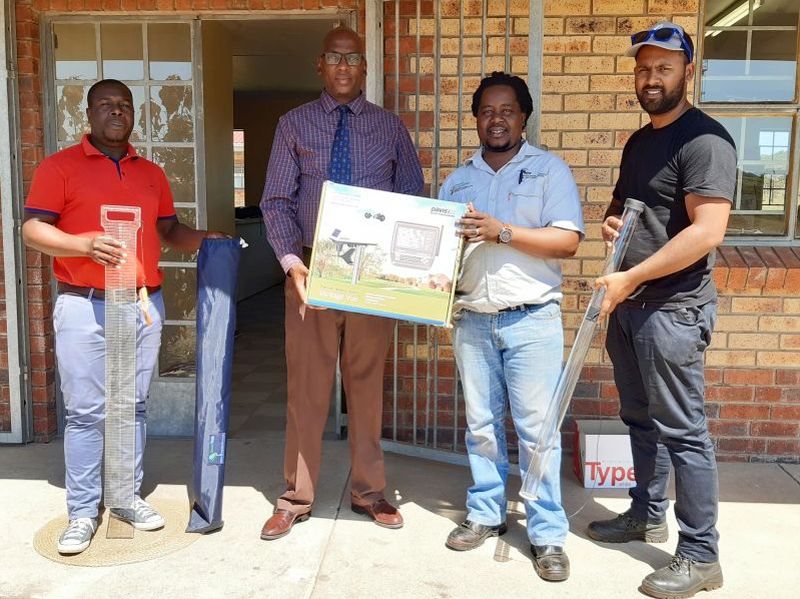 SAEON donated a Davis weather station, velocity plank, clarity tubes and a miniSASS kit to the Langelihle High School in the Tembe community

Langelihle High School in the Tembe community was the first school I engaged in the citizen science activities as part of SAEON’s science engagement programme. In July 2019 I met with the school principal, Mr Chakana, and educator Mr Mavuso to introduce SAEON and to discuss our interest in engaging the school in citizen science activities. The principal welcomed the programme and was excited to see it getting started.

The school is in a remote area where cellphone and internet reception is poor and no computers or laboratory facilities are available. In September 2019, SAEON donated a Davis weather station, a velocity plank, clarity tubes and a miniSASS kit to the school. Teachers were trained to programme the weather station and to download data. As a technician this is part of my work, and I enjoy being able to share knowledge with those who want to learn.

The weather station assists learners in gaining a better understanding of the weather variables that get measured. They have also gained knowledge in weather data interpretation. For example, as part of the programme they have been recording air temperature and humidity twice a day, in the mornings and afternoons, and comparing the two data sets on a graph.

With help from Mlu Shabalala, a SAEON Hydrology PhD student working in the area, we conducted onsite training with grade 8 learners to show them how to use the velocity plank and clarity tube as well as how to do miniSASS surveys to assess their stream health. The school was selected because it is close to KwaZibi Stream, which means that they do not have to go far to do their monitoring using citizen science tools. KwaZibi is a small stream that feeds into Siyadla which, in turn, feeds into Kosi Lake.

Learners were excited to be exposed to citizen science. Future projects include educating them to make their own citizen science weather-monitoring tools to gather data that will be cross-checked against the weather station data for accuracy. This means that they will be able to monitor the weather from their homes by using the tools they have made themselves.

“What I find inspiring about Siphiwe is that he is making science understandable and relevant to the communities within which we work. This is enabling our platform to be more collaborative and to have greater impact, doing science with and for society. As an assistant technician he has years of experience in the field, making sure the backbone of our observations in Maputaland are delivering long-term reliable data for academics and students to use. Although students get their formal training in lectures, nothing beats hands-on practical training in the field.

Siphiwe has over the years quietly trained and guided interns and students (and, dare I say, well-established academics). But he wanted to do more. He has a vision to make a difference in the areas in which we work. As a node, we all agree that merely doing the science is not enough. Producing a paper in a high-end academic journal is one thing, but having an impact, sharing and co-learning with those who are feeling the impacts of global change, and empowering citizens to understand and become better stewards of the environment through democratising science, is where the real rewards lie.”

*  Umhlabuyalingana means ‘land that is flat’