As a precursor to the selection of landscapes to serve as EFTEON (Expanded Freshwater and Terrestrial Environmental Observation Network) research sites, two test sites were erected at the De Beers-owned Benfontein Nature Reserve in the Free State.

The site selection and tower erection were facilitated by the SAEON Arid Lands Node, who have had a long-standing research relationship with the researchers and management of Benfontein.

The EFTEON test sites were selected based on biome type and vegetation structure – a Savanna site and Karoo site were agreed upon and given the thumbs-up in October 2019.

Each site contains a fully instrumented eddy covariance flux tower measuring carbon dioxide and water-vapour fluxes. These towers, which measure 13 m in height at the Savanna site and 3 m at the Karoo site, will provide high-frequency measurements of exchanges of carbon dioxide, water vapour and energy (latent and sensible heat) between the surface and the atmosphere.

Although the landscape selection process is still under way, EFTEON actively seeks to identify and engage in the best practices for on-site management and data acquisition for these systems ahead of the EFTEON Landscape deployment. In doing so, international collaborators from Germany’s Thünen Institute have joined EFTEON members on-site to share knowledge and skills from ongoing installations.

The EMS Africa (Ecosystem Management Support for Climate Change in Southern Africa) team technician joined EFTEON members at the Benfontein sites to aid in calibrations and instrument fine-tuning before visiting long-established sites at Grootfontein in the Eastern Cape. These towers represent a hands-on learning approach towards developing effective operational procedures and a glimpse into what will eventually become the heart of the EFTEON project.

The data collected by these flux towers will be used by Amukelani Maluleke, a PhD student supervised by Stellenbosch University’s Professor Guy Midgley, SAEON’s Dr Gregor Feig and Dr Christian Brümmer of Thünen Institute in Germany.

The collaboration includes a 12-month stay for Amukelani at the Thünen Institute, where Dr Brümmer leads the EMS Africa work package on eddy covariance flux measurements. The stay is funded by the German Academic Exchange Service (DAAD) and includes training for Amukelani on handling eddy covariance datasets as well as research methods which will be vital towards the successes of EFTEON and building capacity for eddy covariance research in South Africa.

Analysing the response of carbon fluxes in arid ecosystems

In these flux towers, EFTEON researchers ask questions about the exchanges of carbon and water vapour between the savanna and karoo ecosystem patches and the atmosphere. This makes for a suitable comparison of these structurally distinct patches located in the same climate. Also, it will be important to investigate the water-use efficiencies of these systems and how these affect the carbon balance measured under varying evaporative demands.

In addition to the savanna site eddy covariance flux system, there are photochemical reflectance index and normalized difference vegetation index sensors running, which measure primary productivity proxies and have been set up by Stellenbosch University’s Department of Botany and Zoology. These sensors will be vital in the estimation of gross primary production through the Monteith (1972) Light Use Efficiency equation. 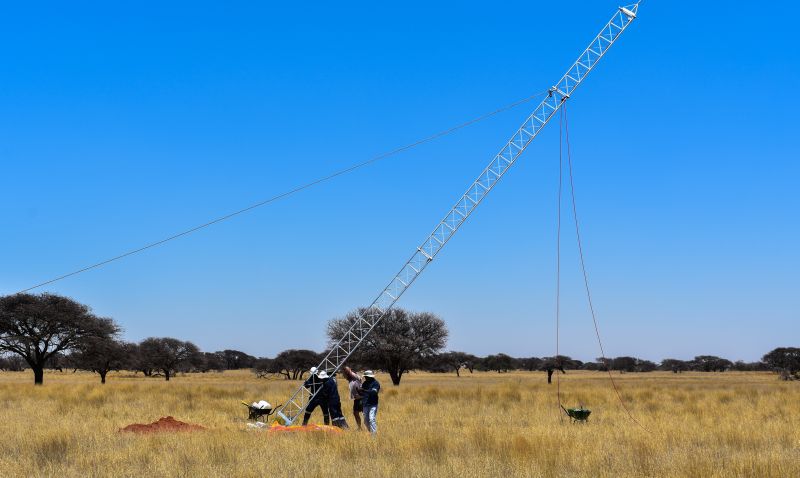 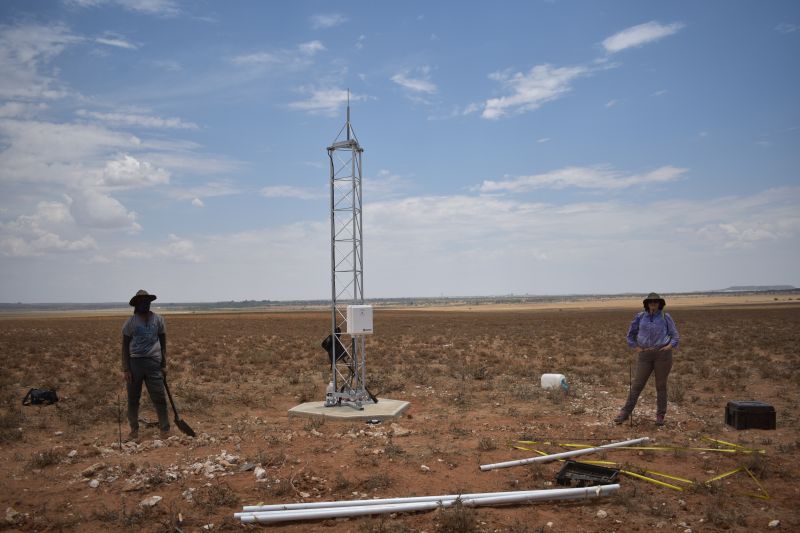 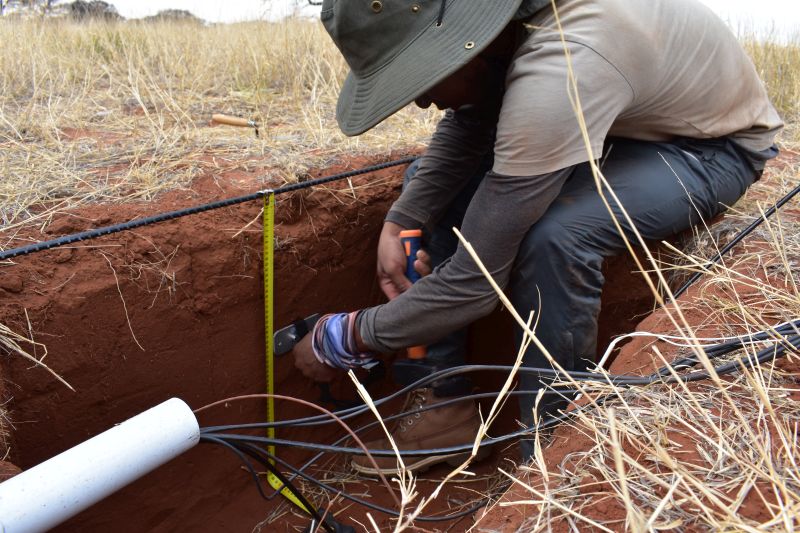 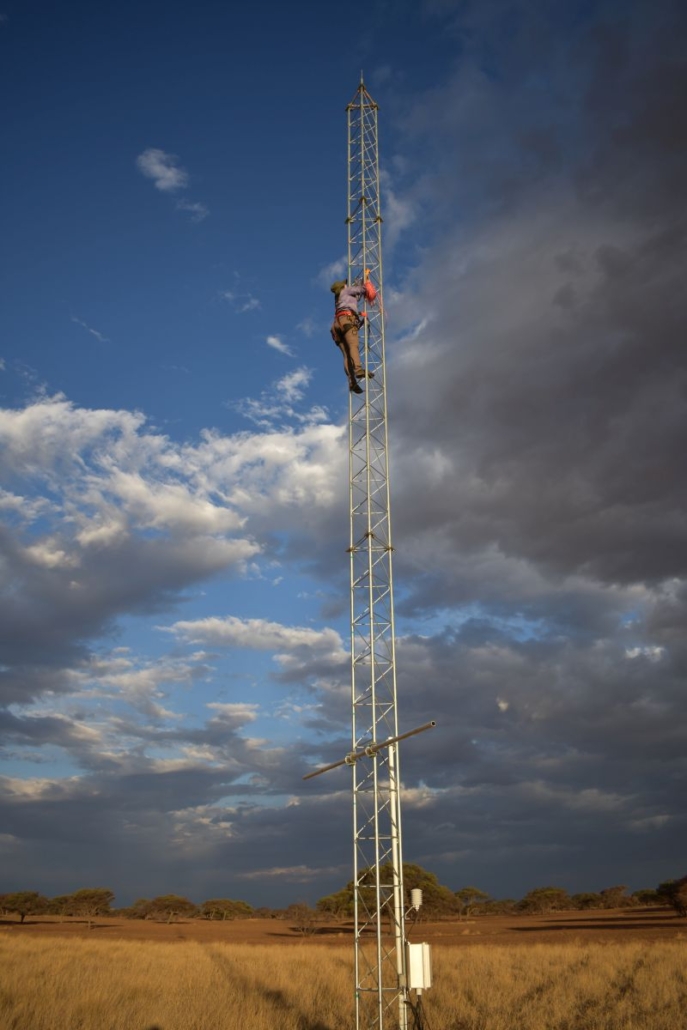 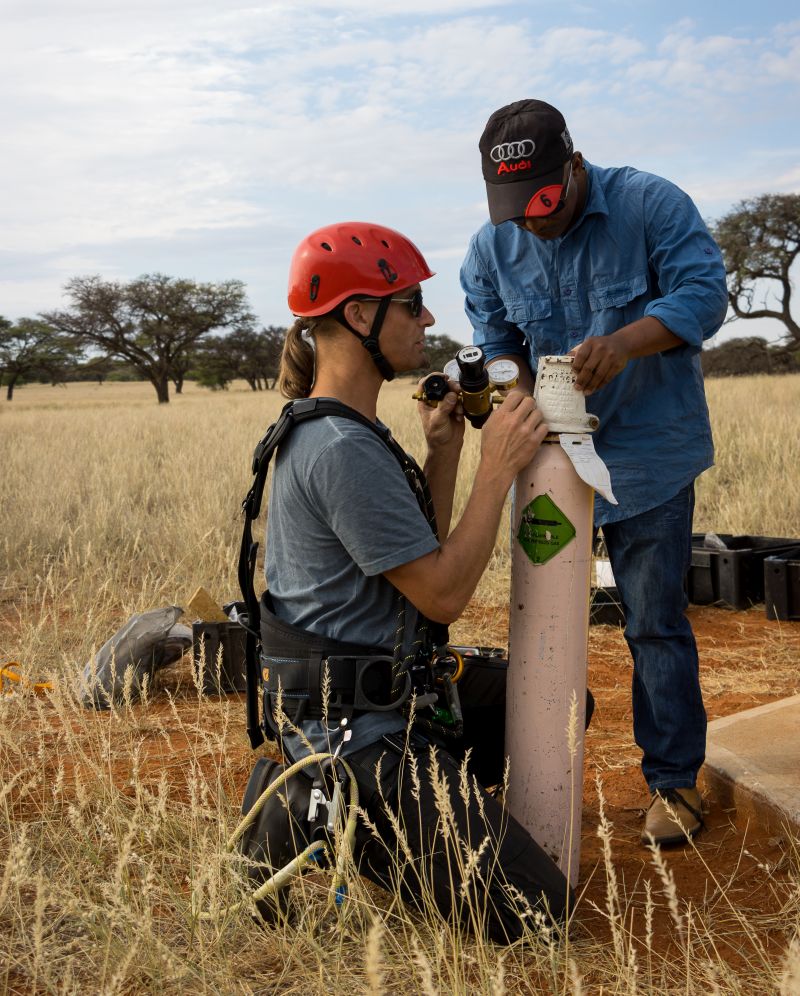 Above and below: EMS Africa technician Jens Judt (with red hat) working with the EFTEON team on the Benfontein sites (Photos: Amukelani Maluleke) 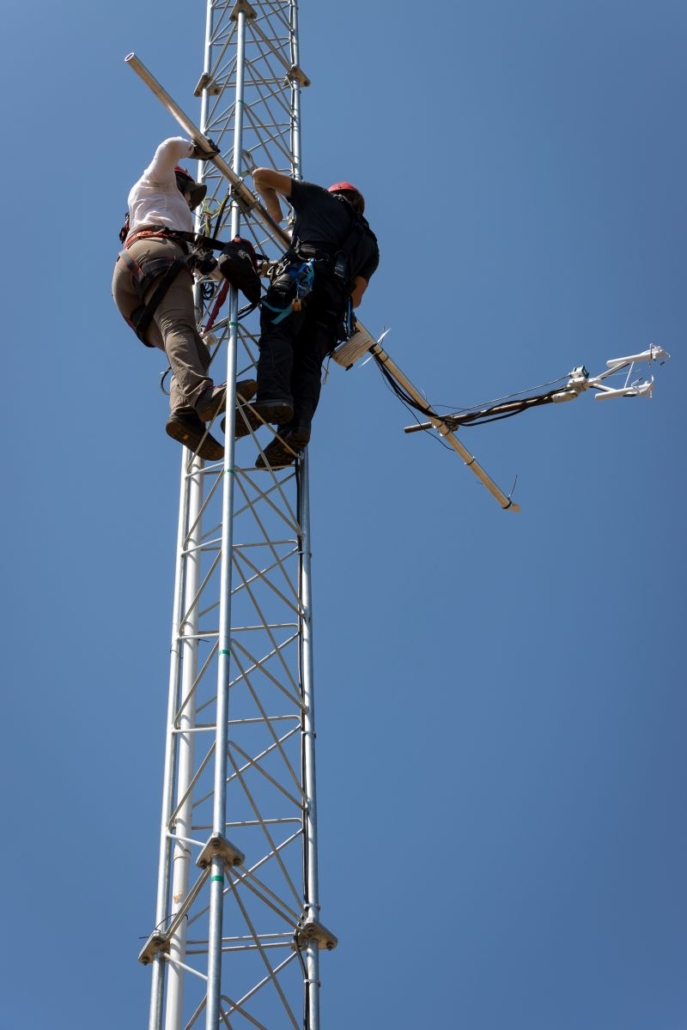