Whether you are looking to conduct research, write an article or seek inspiration under the Karoo stars, the Tierberg Long-Term Ecological Research platform (‘Tierberg-LTER’ or ‘Tierberg’ for short) is there for you. Situated near the northern foot of the Swartberg mountains, approximately 30 km east of Prince Albert, you may find yourself in the heart of the Succulent Karoo. For those not familiar with this “diamond in the rough”, here follows a brief background.

Over three decades ago, an area was fenced off from the livestock on the surrounding farms and research commenced, mainly in the form of ecological studies. Over the past 34 years there have been hundreds of visits to Tierberg by scientists looking to understand the ecology of the Karoo.

Check out the visitor’s logbook when you arrive at Tierberg, not only to sign your name into history but also to reminisce about the names that have been noted down here since the late 1980s. You will find the names of former young scientists, now some of the country’s leading researchers. 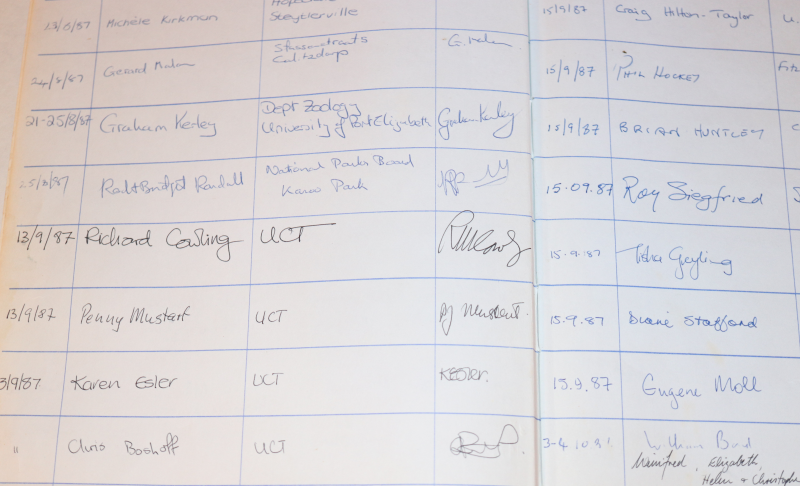 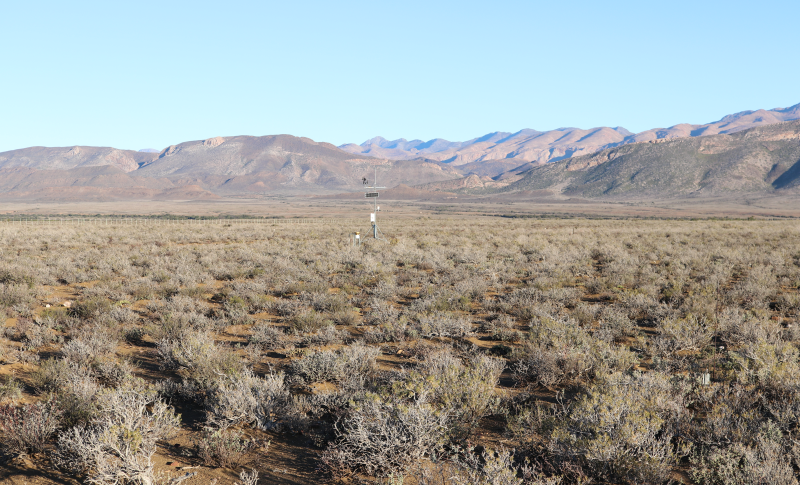 The Tierberg-LTER weather station surrounded by Karoo shrubs and the beautiful Swartberg Mountains in the background.

This research centre and the active scientists using it as a base from which to study, gradually exposed much of what we know about the Karoo. SAEON became involved in the research being conducted here through two of the Karoo’s most notable researchers, Richard Dean and Sue Milton-Dean. Richard and Sue’s active involvement continues to date and it is with their support that the research continues to thrive here.

In 2014, the fenced-off area was donated to the National Research Foundation (NRF) and is being managed by staff of SAEON’s Arid Lands Node, which do field work and maintenance at the site. An automated weather station has been erected to continue the exceptionally long climate records, the data of which inputs into many of the study findings.

With much of the Karoo currently drought stricken, the site, along with the weather data, has been a great resource for studying the effect of climate on vegetation. A phenology study, usually conducted by an intern stationed in Prince Albert, is useful to determine the climatic triggers for growth and flowering in the Succulent Karoo.

There are also other studies focused on the effect of drought, such as the drought transect lines that were recently re-surveyed by Sue and interns. Tierberg LTER is however not just for SAEON, but for environmental science in general and thus there are other researchers that also frequent the site for their own studies.

SAEON has had great success with students and interns at Tierberg, with many of the interns continuing their studies. Recently two of these interns, Gina Arena and Juan Swanepoel, submitted their theses for their PhDs.

Along with a specified research project, the interns usually assist scientists visiting Tierberg and also work closely with Renu-Karoo. It is again here where Sue and Richard support SAEON by providing mentorship and assistance to the interns.

In the past, the interns would work at the plant nursery next to the Wolwekraal Nature Reserve, but SAEON now has a small office in town which benefits the interns greatly. The interns’ research work is not limited to Tierberg, they also do some studies at the Wolwekraal reserve.

Beyond the research, the interns also play a vital role in communicating with the local communities and providing science engagement to learners. Several of the interns have written articles for the local newspaper about the work they or SAEON does in the area and these articles are well received. They also engage with schools and some of the education-outreach programmes to encourage learners into the biological sciences.

The Tierberg-LTER site has proven to be a great resource for environmental research and is considered an asset. As an asset, it should be maintained to operate optimally.

Recently, the Arid Lands Node technicians, with the support of Renu-Karoo interns Waldo Jordaan and Stefan Short, spent a week conducting maintenance at the site. The main task was to sand and repaint the huts where visitors stay over and to replace the roofing between the huts.

“We achieved this and more thanks to the assistance of Waldo and Stefan,” says node technician Tshililo Ramaswiela. “It was also a great feeling to deliver the old materials to the local Path onto Prosperity Centre as a donation. The centre staff were most grateful and already had plans to use the material.” 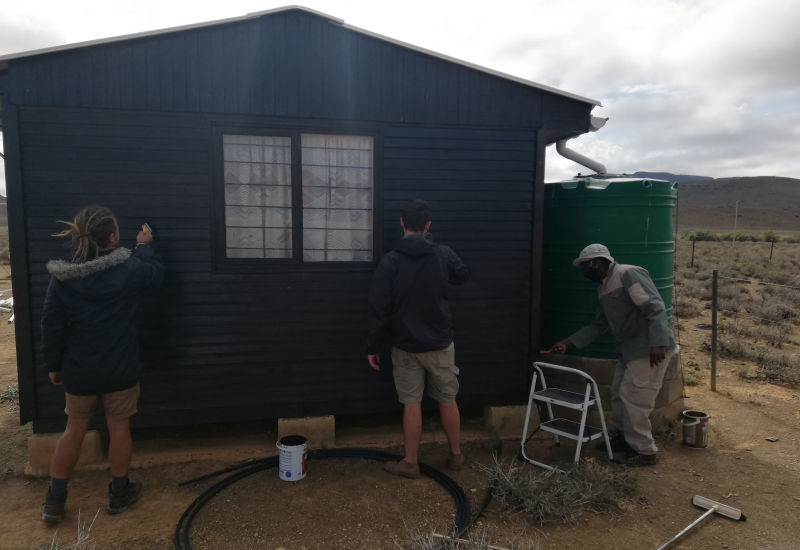 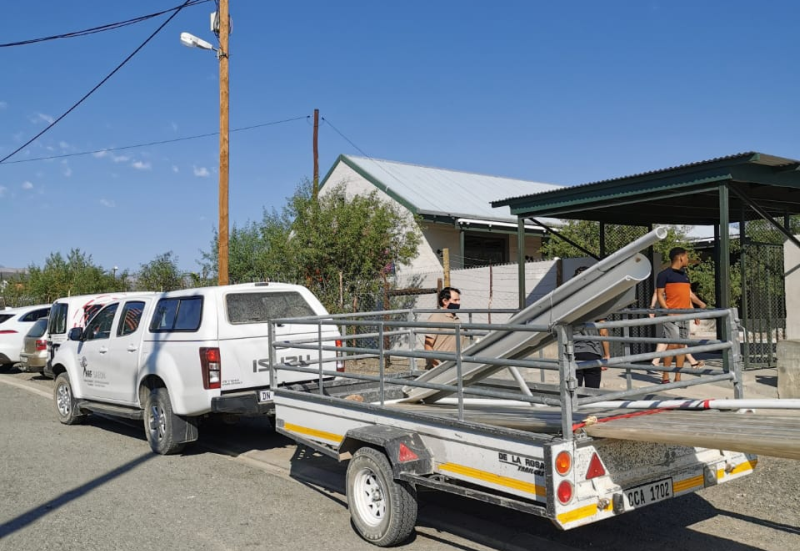 The Arid Lands Node team invites researchers, technicians and students to get in touch with them for a visit to the site or to conduct research. The on-site facilities make it ideal for getting an early start and relaxing under the stunning Karoo stars by a campfire at night.

The Karoo landscape at Tierberg-LTER as the sun sets