Rethinking the value of historical photograph collections to the LTER network

This article is dedicated to the late Dr Piet Roux, whose contribution to arid lands research in South Africa has been exceptional. Furthermore, his donation of historical data and photograph collections to the Plant Conservation Unit will continue to serve as irreplaceable baselines of data for ongoing study.

The sudden loss of irreplaceable archives of historical landscape photographs in a natural disaster has highlighted their value and begs a new question: Why are long-term ecological research (LTER) programmes in southern Africa not taking greater advantage of these early baselines of past environments to build upon existing datasets of environmental observation?

On the morning of Sunday 18 April 2021, a wildfire ignited below Devil’s Peak on the slopes of the Table Mountain National Park in Cape Town, South Africa. The weather conditions at the time of ignition were hot, dry and windless.

By late morning, the winds had picked up, changing direction by early afternoon causing the fire to spread unchecked towards Rhodes Memorial and the west flank of the University of Cape Town’s (UCT) upper campus. By mid-afternoon, embers carried by the wind had landed on the roof of the north-wing of the HW Pearson building where the Plant Conservation Unit (PCU) was located on the top floor.

Photos of the fire exploding its way through the research unit circulated between my colleagues. What had become my “home away from home” fast became a roofless, empty shell of rubble and ash.

By the early evening, the fires had affected several other buildings on UCT’s upper campus – including the Jagger Library Reading Room – destroying irreplaceable collections of rare books and archives of data.

Significance of this loss

In the days that followed, the PCU team assessed the losses. The damage to the research unit was total. Estimated to the value of over 2 million ZAR, everything from office equipment and furniture, computers and scanners, libraries of reference books, field and lab equipment, to archives of government records, data, photograph and slide collections, kitchen equipment, artwork and plants were destroyed. Miraculously, the palaeo-ecological lab was spared serious damage.

Perhaps the greatest loss was that of the photograph and slide collections of southern African landscapes, which provided an unmatched peek into the past. These images served to illustrate the botanical descriptions and observations made by botanists such as John Acocks, Eugene Moll, Richard Cowling and Barrie Low, among others.

Thankfully, most of the collections had been scanned and are available digitally, but some were in the process of being scanned and have now been lost forever. What was also destroyed in the fire was the collection of repeat photographs that Timm Hoffman and colleagues have been assembling over the last few decades. Although these are also available electronically, not all the material was digitised and some of the metadata associated with the sites was destroyed.

Damage to the Plant Conservation Unit in the HW Pearson building located on the upper campus of the University of Cape Town, after an uncontrollable wildfire spread on the slopes of the Table Mountain National Park. (Photo: Dawood Hattas) 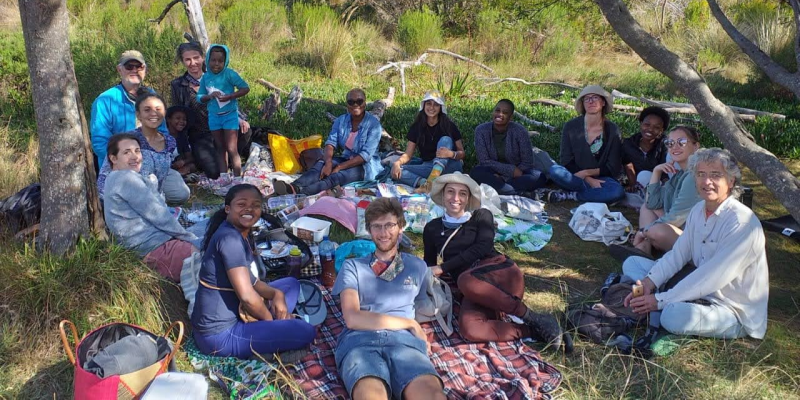 The PCU team consoling each other over a picnic at the Silvermine Dam a weekend after their offices were destroyed in the fire. (Photo: Timm Hoffman)

Historical photographs of landscapes have been used to document and quantify long-term environmental change in the biomes of South Africa through a well-established technique called repeat photography. This tool has been used widely across Africa and the world to document and quantify the extent of glacial retreat, changes in woody plant cover (termed bush encroachment), the spread of invasive alien plants, the nature, extent and rate of biome shifts, post-fire vegetation recovery, and to monitor populations of iconic species that are key indicators of global change. Repeat photography has broader applications than research and is used to inform environmental management, education, land degradation, ecosystem restoration and policy.

A before and after photograph comparison illustrating an increase in grass cover (particularly in the cover of a dominant species, Tenaxia disticha) at a site located in the boundary between the Nama-Karoo and Grassland biomes (also known as the eastern Karoo) in South Africa. (Photos: John Acocks, 1946; Timm Hoffman and Gina Arena, 2018. Images: copyright of rePhotoSA (http://rephotosa.adu.org.za/) under a CC BY-NC 4.0 Creative Commons licence)

Well-archived photo databases provide historical ecological contexts of landscapes. A composite of repeated photos captured over many years enables researchers to quantify the extent and nature of environmental change at the landscape-level. Repeat photographs, when paired with records of historical climate trends, fire and land use histories, vegetation survey data and satellite-derived vegetation indices, provide compelling visual stories of change which are often easily understood by a wider audience. Furthermore, landowners and managers who are interested in keeping a visual record of the changes in the environments they are managing, find this to be a practical tool they can implement.

Almost 2 000 photographs from the collections archived by the PCU have been repeated over the last twenty years. These have been analysed and published in more than 40 books, reports and scientific and popular articles by students, staff and research associates of the PCU.

A citizen science initiative, rePhotoSA, was developed in 2015 to increase the number of repeated photographs in the database by involving the public. rePhotoSA has resulted in over 280 repeated landscape photographs being uploaded to the website by citizen scientists. SAEON has utilised these collections to a lesser degree having published eight studies over the last decade.

A before and after photograph comparison illustrating a reduction in the cover of Karoo vegetation by livestock during a severe drought at a site adjacent to a kraal (an enclosure for livestock). (Photos: Timm Hoffman, 1986; Timm Hoffman and Gina Arena, 2017. Images: copyright of the Plant Conservation Unit under a CC BY-NC 4.0 Creative Commons licence)

A case for repeat photography in the LTER network

These valuable collections of photographs, which often provide the earliest environmental baselines in southern Africa, are largely underutilised, however. Although rePhotoSA serves as a significant contribution to the continuation of data collection across southern Africa, the future of repeat photography cannot, and should not, lean only upon the unsupported and intermittent participation by citizen scientists.

The data derived from repeat photography would be particularly useful in LTER projects that are aimed at understanding long-term changes in the terrestrial environment to further inform global change policy and land management. Such photo databases would provide great value to SAEON’s scientific monitoring programme.

Where appropriate, photo sites can either be strategically selected to enhance the data generated at existing long-term monitoring sites, or they can form part of new observatories developed across the SAEON terrestrial nodes. Depending on the nature of the research questions, photographs can be repeated as often as annually, or as infrequently as every decade. Vegetation surveys can also be established and monitored at the photo sites to track the changes in species composition and plant growth form cover over time.

A before and after photograph comparison illustrating an increase in the cover of dwarf shrubs following fire suppression and a change from sheep to cattle farming at a high-altitude site in the eastern Karoo. (Photos: Piet Roux, 1962; Gina Arena and Helga van der Merwe, 2017. Images: copyright of the Plant Conservation Unit under a CC BY-NC 4.0 Creative Commons licence)

The equipment, method and analysis

The equipment required to take a repeat photograph is relatively affordable and includes a GPS to record the location, a camera and tripod stand, the original photograph for lining up physical features and the relevant datasheets for notetaking. Repeat photography, by nature, is investigative. Much like a detective will hunt for clues to find a lead in a case, repeat photographers gather all the information needed to relocate a photo site.

This can be relatively easy to achieve if a decent level of metadata was initially recorded by the original photographer (such as a farm name, nearest town, roads or landmarks). However, most often than not additional information is obtained from topocadastral maps, accompanying historical vegetation surveys or through speaking to locals from nearby farms and towns.

To yield valuable results, the field method requires accuracy, precision, an eye for detail and a standard protocol of metadata collection. Once at the photo site, prominent details and features in the landscape, such as rocks in the foreground or trees and mountain ridges, are lined up using the historical photograph as a guide. Once the photograph is retaken, a detailed description of the visible changes in the landscape is written. Lastly, an inventory of the dominant plant species and their relative covers is created for each landform (i.e. plains, hillslopes, rivers) by walking “through the image”.

Back in the office, the historical and repeat images are superimposed and matched using an appropriate graphics editor such as Adobe Photoshop. The quantification of vegetation changes can be achieved relatively quickly and accurately in comparison to other time-intensive methods of image classification. The percent covers of grasses, trees and shrubs are estimated for each landform from the historical and repeat images. These estimations are improved through consensus between multiple observers, and if available, calibration sheets can be used to further guide the process. 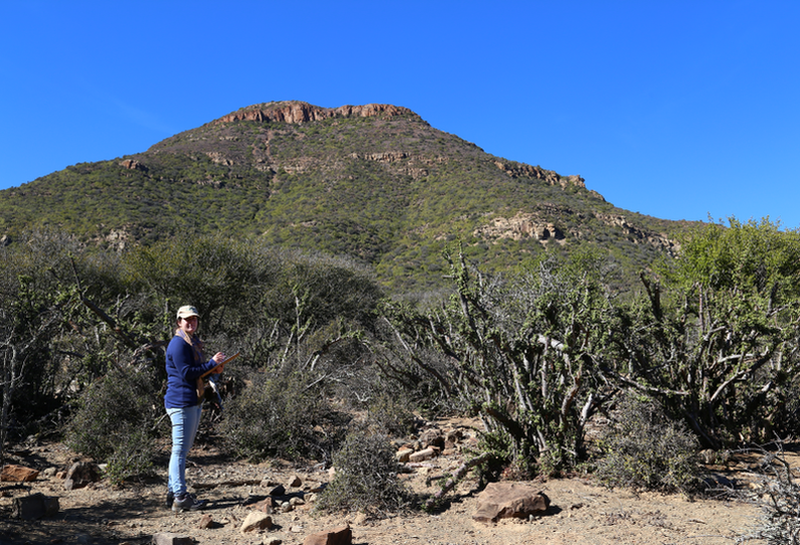 Gina Arena collecting site metadata and listing the dominant plant species in the foreground of a repeat photograph. The visible changes in the vegetation between the historical and repeat photographs are discussed and transcribed while at the site. (Photo: Timm Hoffman) 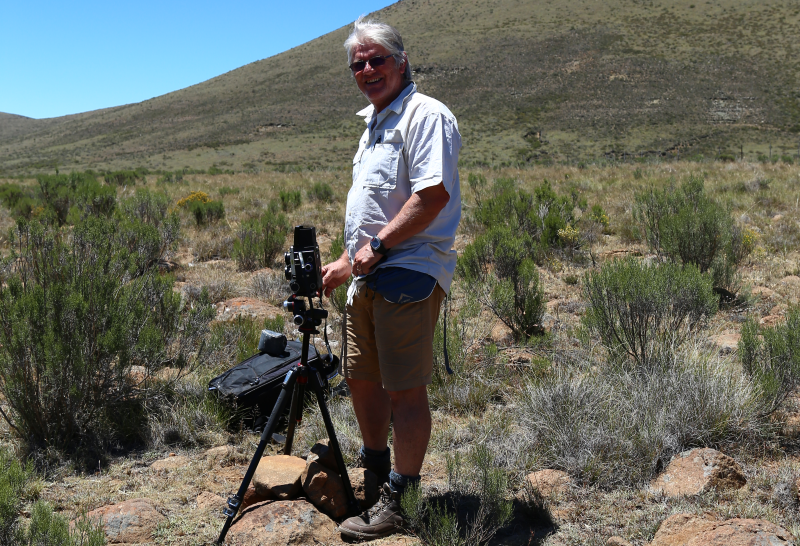 In many ways, using the tried and tested methods can yield comparably accurate results in a far shorter amount of time. However, the development of advanced techniques may well prove to be very handy for ecologists in the near future.

When used appropriately and with adequate supporting climate, fire and/or land use data, “before and after” photographs of environmental change serve as an effective science communication tool. The protocol used has been developed so that it can be easily applied by anyone who would like to use it.

There are several opportunities to explore ways in which repeat photographs, and the method, can be used as an educational tool in schools or on science camps to illustrate ecological concepts or terms, and to teach people about the value of long-term monitoring in tracking the impacts of global change in natural landscapes.