Since 2011 invertebrates have been officially included in the monitoring of the Department of Forestry, Fisheries and Environment’s annual research demersal trawl surveys, which collect data from commercially important demersal fish species.

In the short span of just 10 years, knowledge of these offshore invertebrate communities has rapidly increased, with the Field Guide to the Offshore Marine Invertebrates of South Africa (Atkinson & Sink, 2018) being a direct output of this work.

Although we have come to know substantially more about the invertebrate communities in recent years, there is still much to be discovered about these poorly understood animals. New records, and in some cases new species, are constantly being discovered, especially in the deeper zones (500m–1000m), which remain poorly sampled.

The annual demersal survey has run smoothly for the past two years, after a break in 2018 due to ship maintenance.

The most recent demersal survey was conducted on the west coast of South Africa. The six-week cruise kicked off in Cape Town on January 25 and returned on March 15.

This voyage aboard the FRS Africana once again met with success as several collections were made of rare and previously unknown invertebrate species, adding to our growing knowledge of these animals. Several interesting occurrences were observed during the survey, including multiple trawled catches of jellyfish exceeding five tons per trawl.

The Benguela Compass jellyfish (Chrysaora fulgida) was responsible for these large blooms, a rare occurrence for the species on this scale. This observation has been recorded in Namibia for another species in the same genus, Chrysaora hysoscella, seemingly due to overfishing. Although such jellyfish blooms have been known to be associated with increasing commercial fishing pressure, long-term monitoring will enable accurate records to assess whether this bloom was a once-off occurrence or is becoming more regular.

There are 40 species of starfish described in the Field Guide to the Offshore Marine Invertebrates of South Africa, with just under half of these being singular or rare occurrences. As a result, very little is known about these species and in some cases, the species themselves are not known.

The sun-shaped orange star, Solaster spp., is one such species and during one of the last trawls of the 2020 west coast survey, two beautifully intact specimens of the starfish were collected. Only two prior records of this starfish exist from a similar location, suggesting a very narrow distribution for this specialist.

The genus is known to occur in cold waters and is largely predatory, with species such as Solaster dawsoni being infamous for preying on other starfish. (For more information on this and other starfish species, see Dr Christopher Mah’s blog for videos.)

The 2019 west coast survey also yielded a new record for South Africa from the genus Zoroaster. This unique-looking starfish with its long rigid arms and relatively tiny disk, was immediately recognised as something different! This particular specimen was recorded at a depth of over 800 metres and some species of this genus are known to occur at depths of up to 5 000 metres  (see a post from the National Institute of Water and Atmospheric Research of Zoroaster starfish recorded in their underwater footage or read up on ancient Zoroaster starfish on Dr Christopher Mah’s blog). With over 20 species known to belong to this genus, it is still unknown which species are found in South Africa.

A bizarre little crab, later identified as belonging to the family Lyreididae, was a first record for South Africa from its genus, Lyreidus, collected offshore on the Agulhas Bank. The entire family has only ever been recorded on the east coast of South Africa, thus increasing its known distribution.

The demersal surveys are not only important for advancing marine science in South Africa but are also vital for the students using the data to not only obtain higher qualifications, but to also further their knowledge of offshore marine organisms. Four of the participants in this year’s cruise are using the data in several ways, as detailed below.

As part of the grant holder-linked project ‘Marine Ecosystem Statistical Tool’ funded by the National Research Foundation and overseen by Dr Natasha Karenyi, MSc students Donia and Silke will be applying the demersal trawl invertebrate data in separate comparative studies. Silke joined the invertebrate scientist team aboard the 2020 west coast demersal trawl survey in view of her MSc research at the University of Cape Town, while Donia was an intern at the Egagasini Node before starting her MSc in August last year.

Donia and Silke will be using the invertebrate data collected during the annual surveys to help address whether the type of sampling method influences the community patterns detected on the South African west coast continental shelf. They will be comparing the community patterns identified from the trawl surveys to those from towed camera surveys and grab samples, respectively.

These sampling methods target different seafloor habitats in different ways and therefore, different types of animals. Since abundance data collected by different methods cannot be combined in statistical analyses, quantifying the differences in community patterns between the gear types is necessary in order to apply and interpret the data appropriately.

Their research will inform ecosystem mapping for marine spatial planning by assessing the scale of influence these different types of data have on ecosystem type delimitation. Accurate ecosystem mapping provides the foundation for effective marine resource management and the successful conservation of South Africa’s rich biodiversity.

Offshore benthic ecosystems (> 200 m) are challenging and expensive to access, and therefore remain poorly studied in South Africa. Epifaunal (organisms living on the seafloor) invertebrates comprise an important trophic level in benthic ecosystems and play a vital role in the overall health and functioning of these ecosystems.

Jordan will be undertaking her MSc thesis later this year. Her research aims to take a transdisciplinary approach to understanding the associations between physical ocean conditions and epifaunal distribution and their functional roles across different ecosystem types.

Jordan’s research will select a suite of epifaunal indicator invertebrate species and apply a biological traits analysis to assess their functional role in the ecosystem. The environmental data will be interrogated in order to quantify their influence (if any) on the epifaunal functioning within different ecosystem types.

Another SAEON-led component of this cruise included the use of our drop camera system to define the essential fish habitats of juvenile hake for the west coast of South Africa.

Despite the usual trials and tribulations of working at sea, Grant successfully managed to survey three areas off the west coast of South Africa ranging between depths of approximately 18 m and 174 m. As always, the footage was nothing short of amazing, with video footage capturing homogeneous soft-sediment habitats as well as heterogeneous hard-ground habitats covered by large boulders!

Although no juvenile hake were seen, other interesting features were observed, including footage of mantis shrimp (Pterygosquilla armata capensis) feeding and large aggregations of encrusting sponge and anemones.

These surveys are not only immensely important for the future of our offshore benthic invertebrate communities but for marine science in South Africa. It is only through consistent long-term monitoring that marine scientists and technicians will continue to learn more about these habitats, thereby providing information for decision-makers to apply appropriate protection of our ocean. 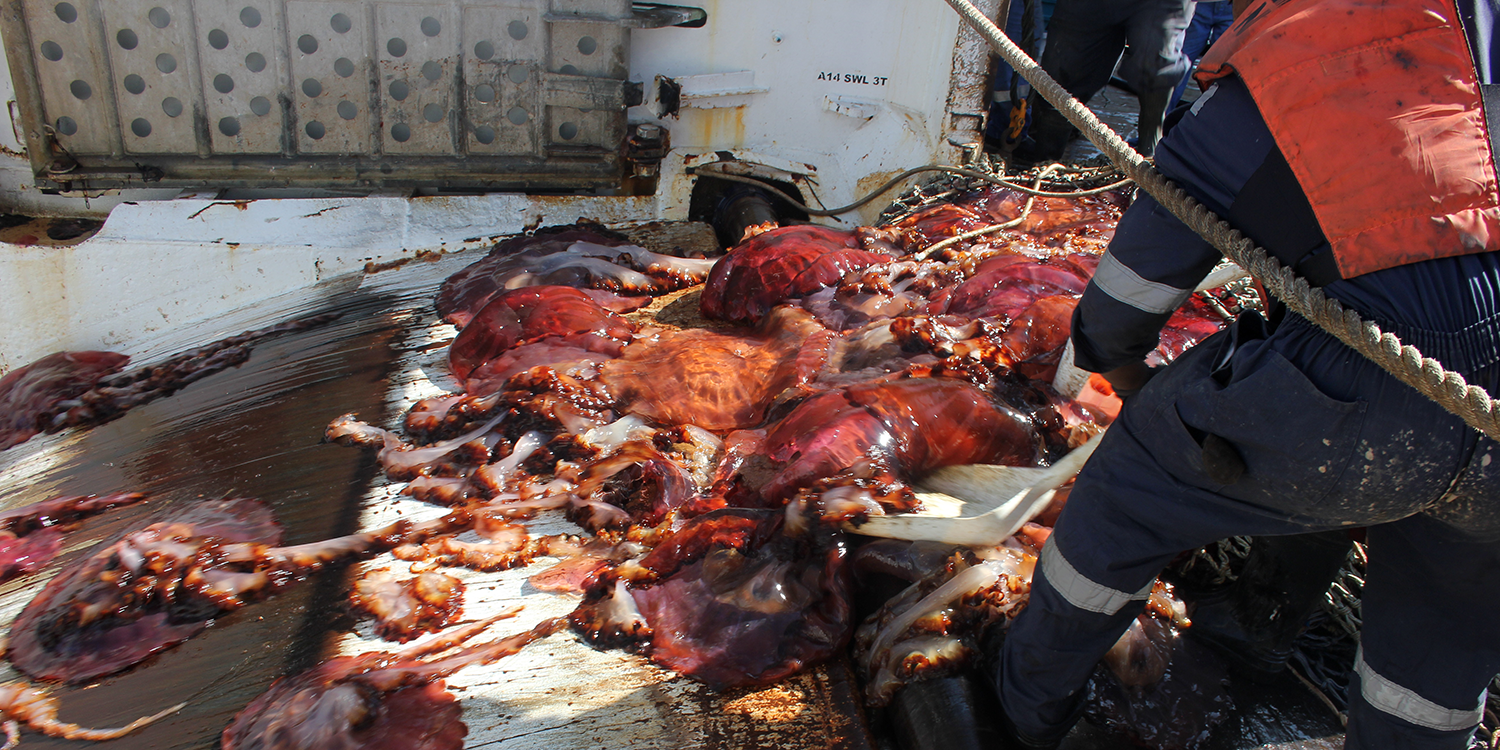 Jelly craze! Five tons of jellyfish being cleared off the deck by the crew of the FRS Africana. 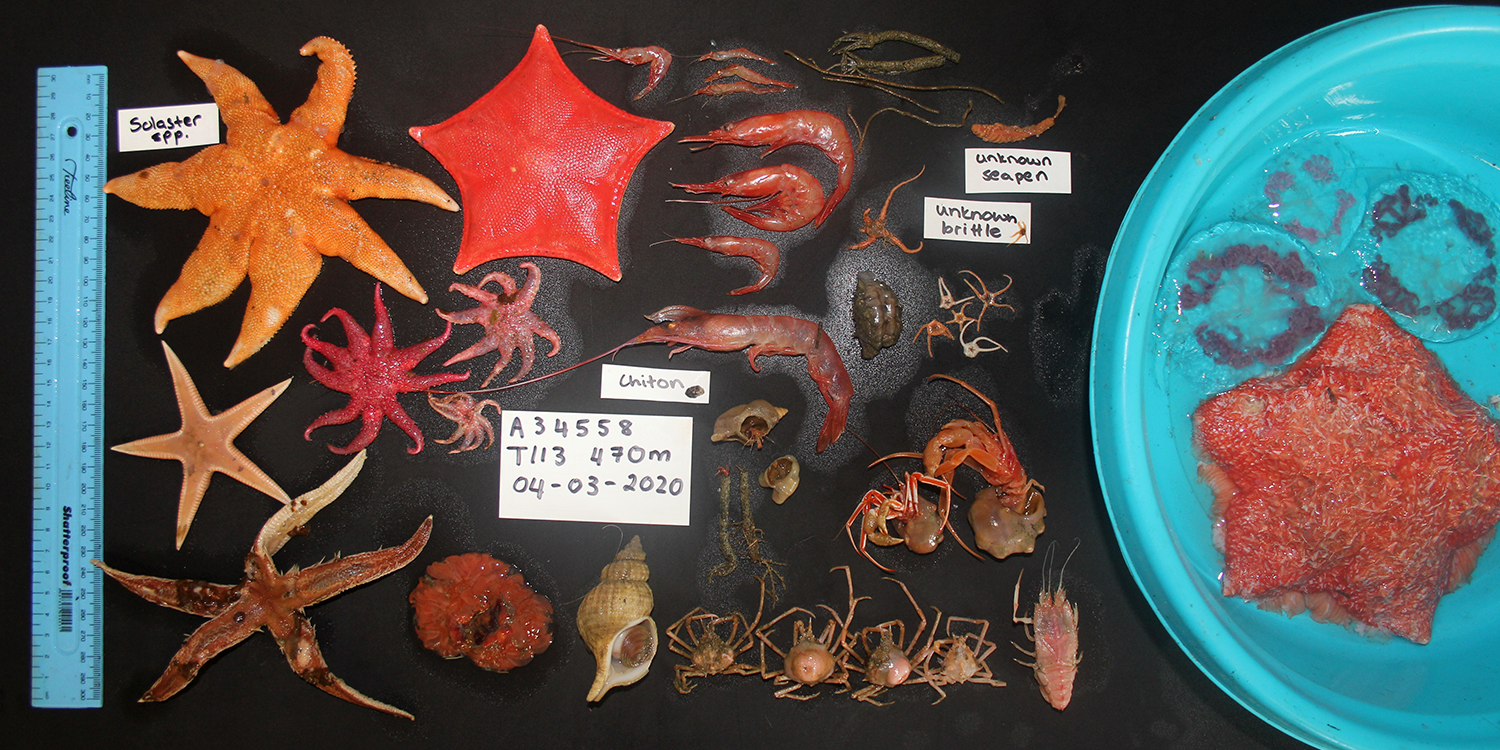 Not all starfish have five arms! Species from the Solasteridae usually have multiple arms and get their name from their sun-shaped appearances. 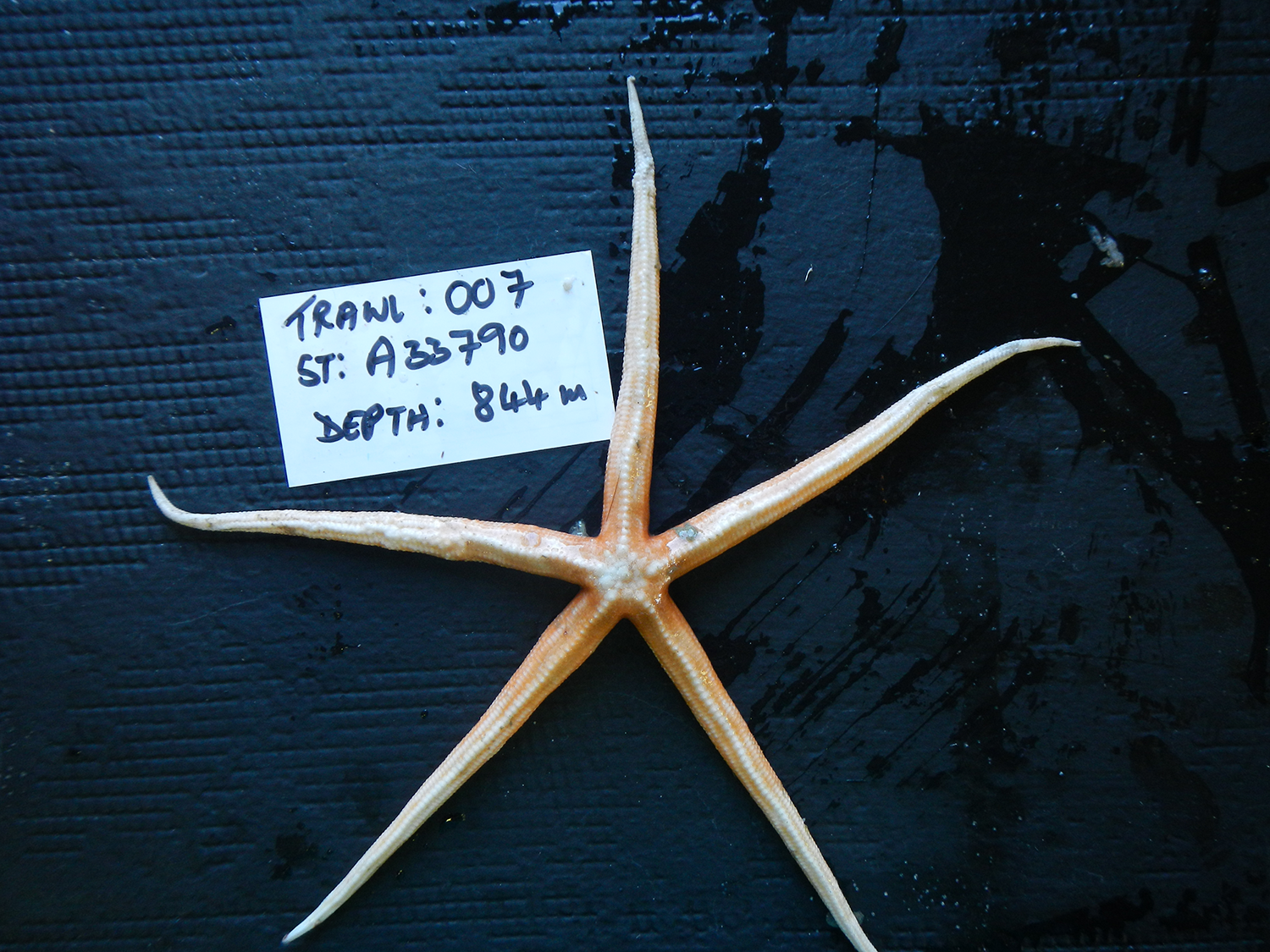 Zoroaster sp. recorded at a depth of over 800 metres, a new record from its genus for South Africa. 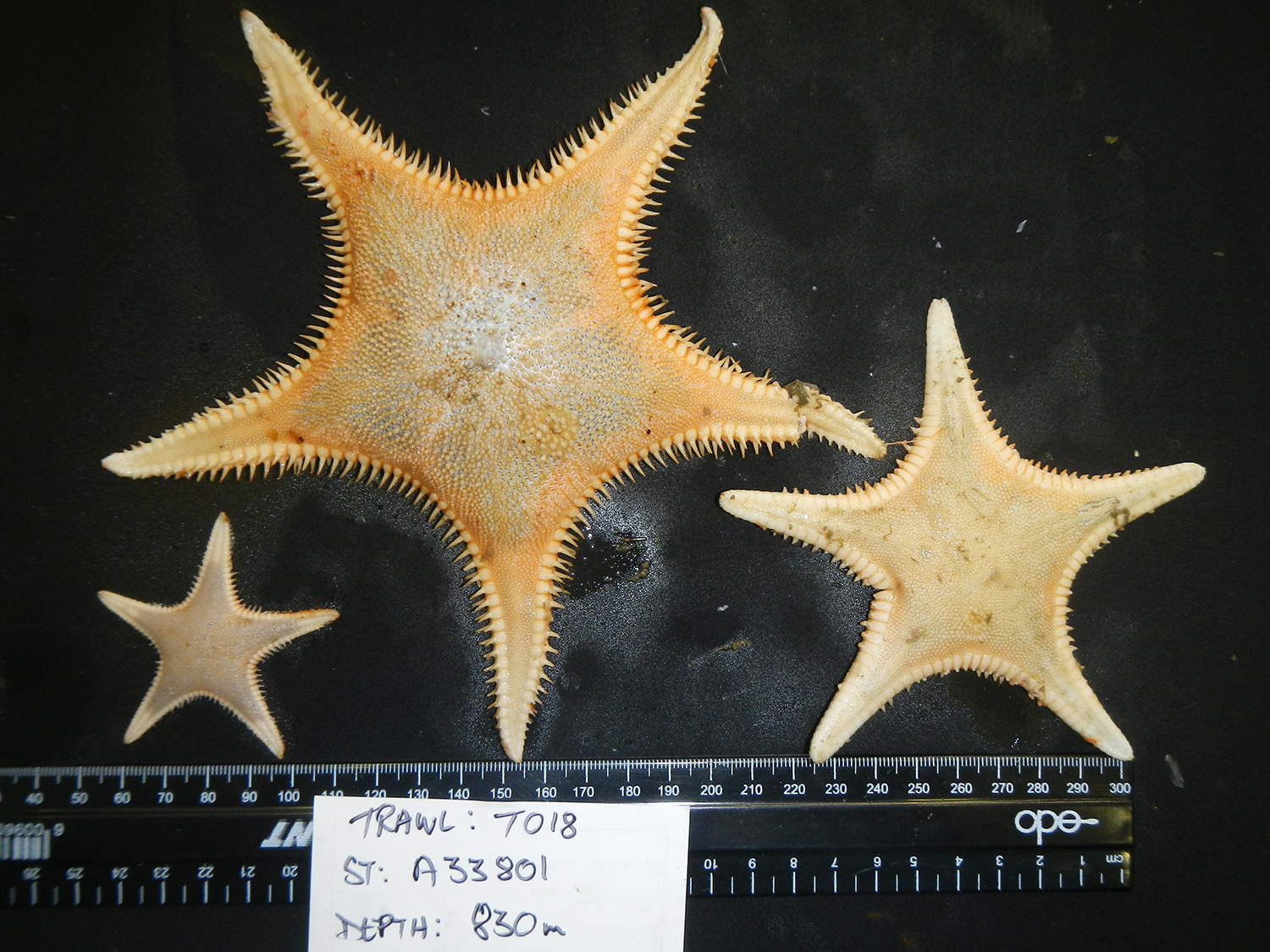 Several specimens of the rarely occurring starfish Plutonaster cf. intermedius were also retained from the 2019 west coast survey. Some individuals have prominent teeth running down their arms, while others do not, and it is currently unknown whether these are two different species. 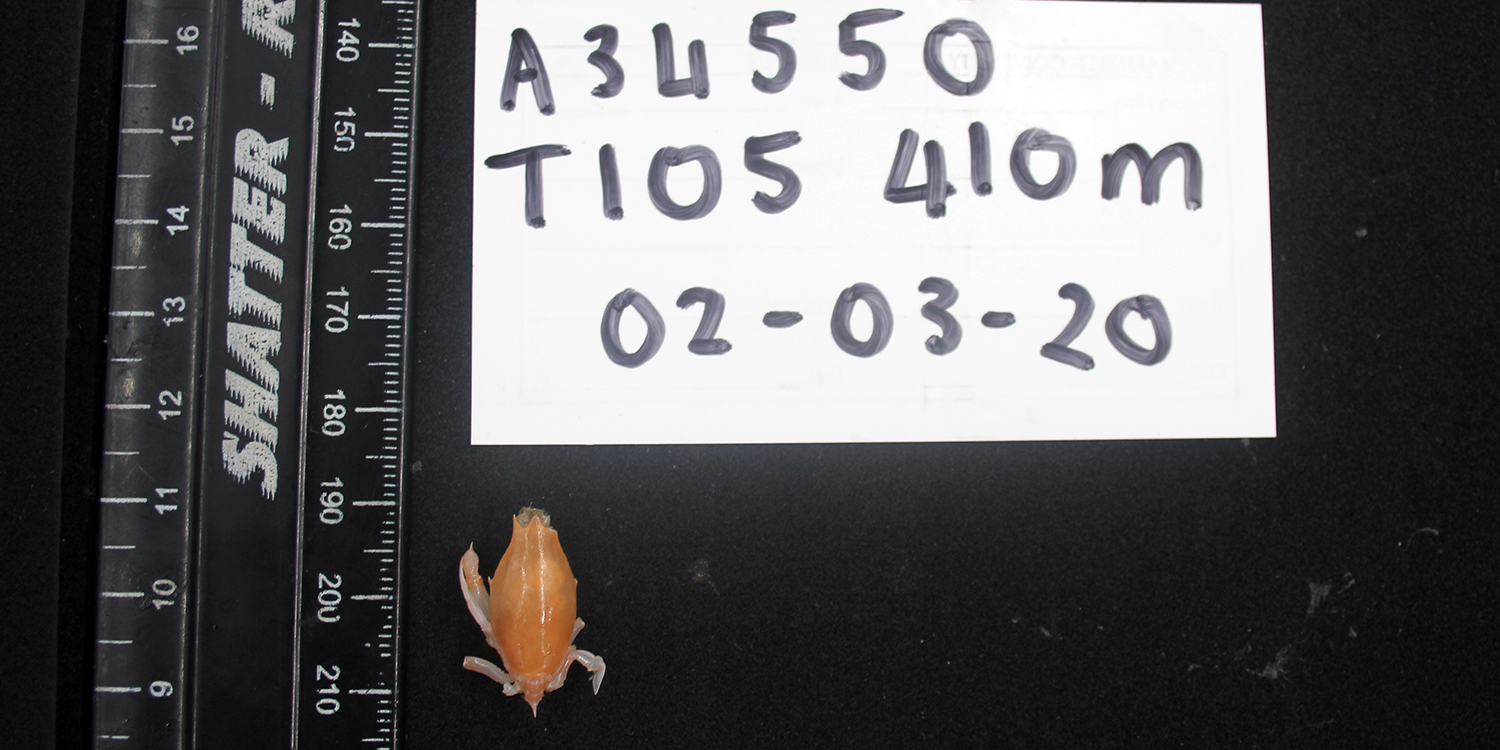 These primitive crabs are often referred to as “frog crabs” due to their elongated carapace, which has been designed for burying themselves in sediment. 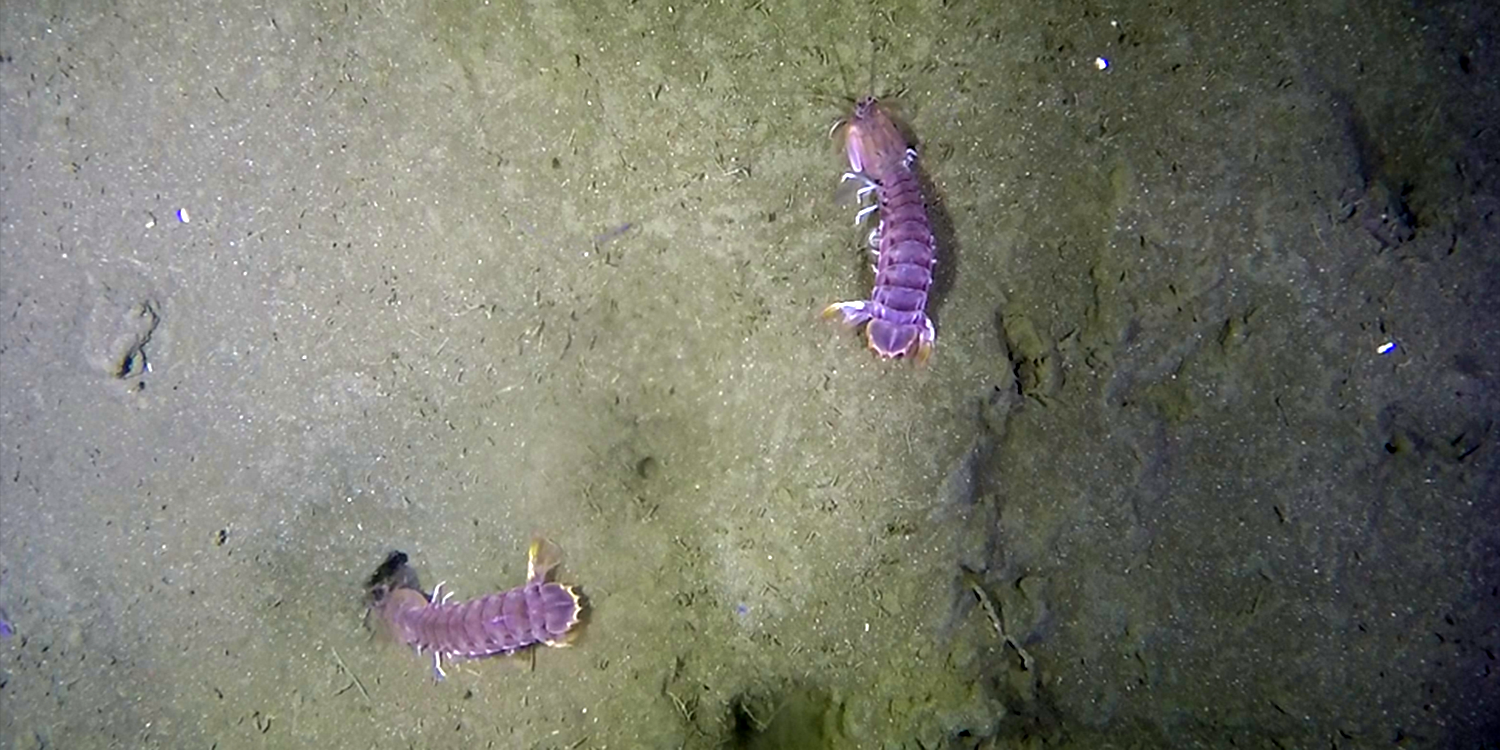 Feeding frenzy! The mantis shrimp (Pterygosquilla armata capensis) appear to be attracted to the artificial light produced by the camera system and the associated increase in prey species. 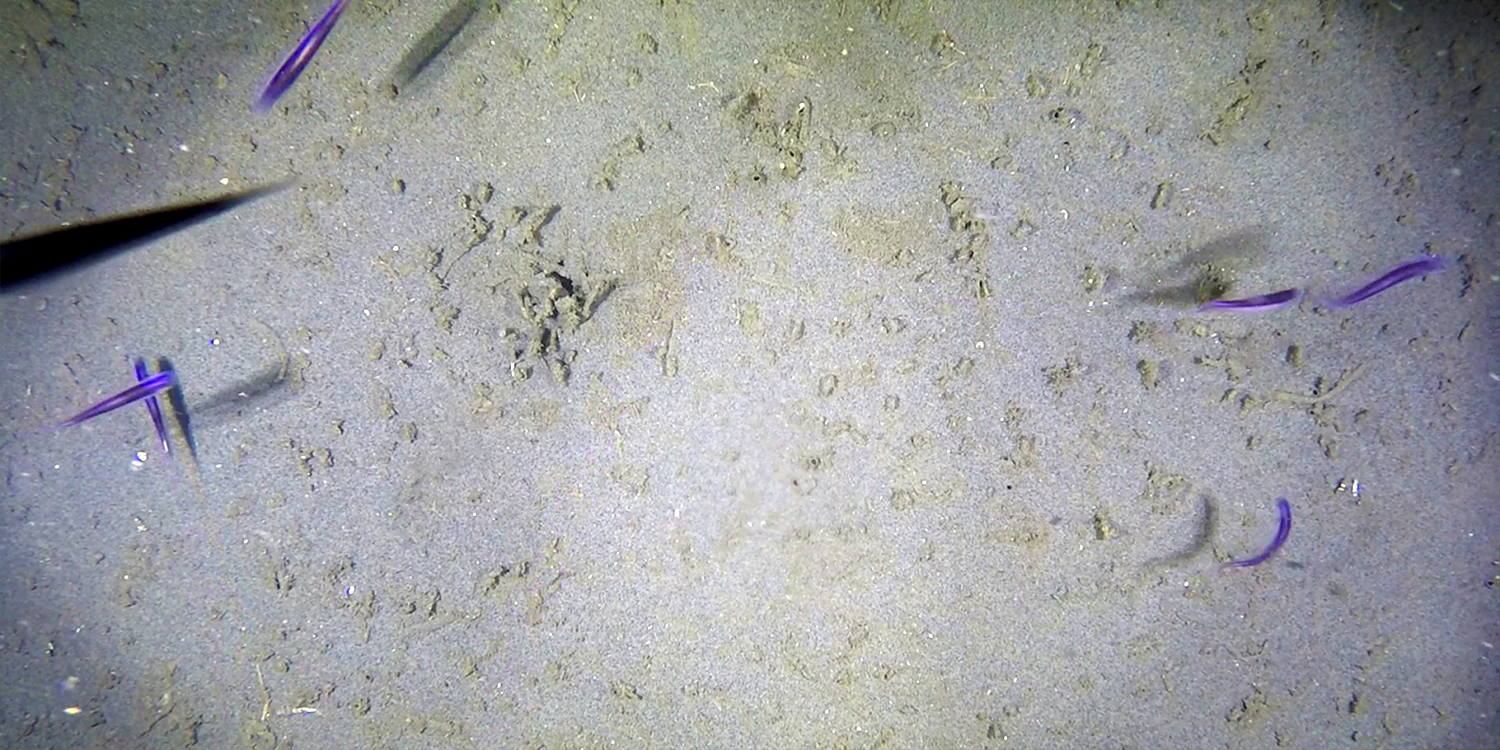 Lightfish (Mauroliccus walvisensis) attracted to the artificial camera light. In the presence of predators, these marine hatchet fish produce adrenaline that triggers bioluminescence in their photophores (light organs) to blur their silhouette against the surface.