Forms can be friendly!

Next time you find yourself looking at a boring web page with a long form that needs to be filled in, consider finding the “contact us” button and requesting a more pleasant form experience – like the one SAEON provides for the Department of Forestry, Fisheries and the Environment (DFFE) on the recently revamped National Climate Change Response Database website.

Forms can be fun and, here at the uLwazi Node, we turn “formidable” forms into websites where users can click with delight! Or, more pragmatically speaking, we think about how to make forms more palatable than they would otherwise be.

This post looks at the user-experience considerations that accompanied the design and initial release of nccrd.environment.gov.za, and how we used those considerations to create a friendly interface.

The many forms that forms can take

Forms are the bread and butter of a software engineer’s employment. This is ironic considering that many programmers draw inspiration from computer games when choosing their vocation. It’s like an aspiring singer scoring a hit from a new version of ‘Itsy Bitsy Spider’, instead of achieving fame as Ozzy Osbourne.

It was not apparent to me as a twenty-something that working with forms has the potential for unexpected nuance (nor did I have any interest in computer games, but let’s skirt this fact to uphold my analogy).

What nuance can there be in a checkbox, you may be wondering? Well, consider the Facebook ‘like’ button. And selecting files to upload? That’s the heart of Instagram. Convincing users to scroll down a list of never-ending checkboxes may seem like a tall order, but social media websites have shown it can be done.

As children’s music pervades every aspect of a toddler’s early development (in a way that Ozzy Osbourne hopefully does not), so is the impact of forms on our lives far more pervasive than one might initially realise. Everyone who has used the internet has used online forms of one kind or another.

The formidable role of forms in our daily lives

A form is a dialogue with a user, and the shape of that dialogue is known as the User Experience (UX). A website’s goal is to construct a dialogue that ensures that what needs to be said is in fact said, while also adhering to the ethical standards outlined in POPI/GDPR/etc.

These rules are an acknowledgement of the nuance and long-lasting repercussions of form-based communication. The power dynamics between participants (companies and users) is extremely lopsided. For a user the dialogue is fleeting, and the extent of the information collected by surveys, EULAs and the like is not always apparent.

Developing the National Climate Change Response Database, then, is a collaborative effort between the DFFE, SAEON and numerous other South African entities to initiate a dialogue with the world about South Africa’s mitigation and adaptation strategies to fend off and protect against the ever-encroaching threat of climate change. SAEON’s mandate in this project is to make sure that this important dialogue is supported by great technology.

Every person in the world should have the option to participate. Engage with us and let us centralize knowledge of the South African climate change response effort in a format that supports learning and action!

To emphasize what is at stake, here is a hard-hitting quote (from a science fiction book I once read but can’t remember the name or author of): ‘What was not sustainable was not sustained’. A glance towards the future and we all know that to end up in such a position is completely untenable.

The dialogue we built

It seems necessary that an article about the release of the revamped National Climate Change Response Database should also include a succinct summary of the system’s functionality.

Unmentioned so far is the benefit of forms from the perspective of information management: forms facilitate the collection of structured information by constraining and labelling user input. Structured information stored in digital databases represents the foundation of the knowledge economy as we know it. In our case, it allows for easily reporting on and tracking climate-change response projects.

Working with the DFFE, SAEON has implemented some 69 fields (but who’s counting, right??) to capture the input that the DFFE requires to make sense of climate change responses. That’s a lot of fields! Climate change is a complicated problem and tracking mitigation and adaptation projects requires a lot of information.

To attract users, and mitigate against the perception of an endless form, using the system needs to be simple and straightforward. Simply put, only the fields that need be filled in should be visible to the user, and then only incrementally.

We have limited the maximum number of empty fields to just 22 inputs. Most of these inputs are dropdown lists, which further reduces the effort required to fill in these fields. Many of the input lists are constrained vocabulary trees – only allowable values are presented to the user.

Web forms are notorious in terms of losing input and requiring users to re-fill out fields. But this is not the case for submissions to the National Climate Change Response Database!

Form data is synced in real-time to a server. Not only can users refresh the page without losing input, but they can also share the form URL with others to complete certain fields.

It is, of course, possible to search submitted data via a publicly available search interface. Via subtle keyboard strokes one can quickly identify response strategies by any number of facets – find projects related to a specific policy, or adaptation strategies for a specific hazard. Or simply scan titles and descriptions via freeform text. But this is a separate article, to be read (and written) later!

Interested? Find out more information and give it a try at nccrd.environment.gov.za. 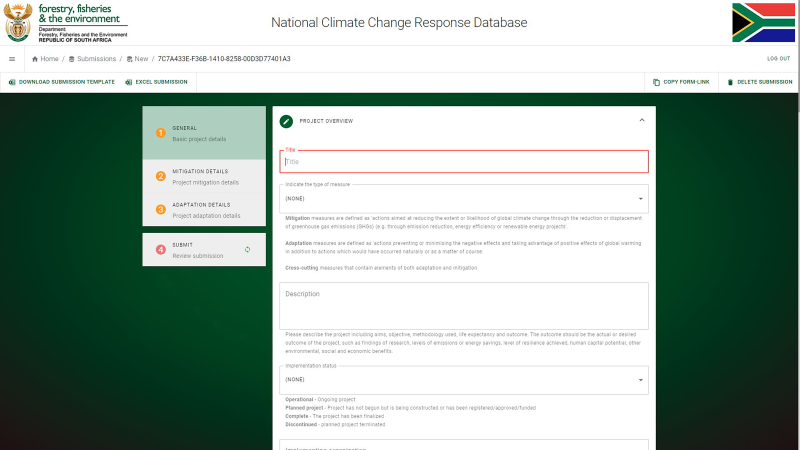 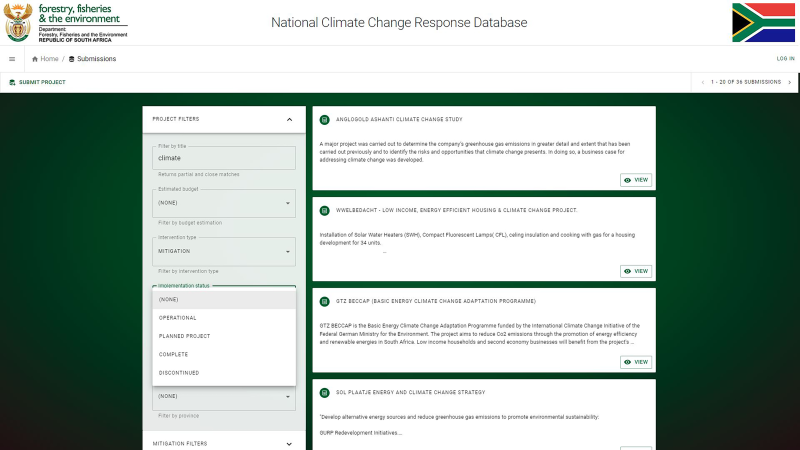