Article based on a news release issued by the State University of New York at Buffalo, United States

Scientists from the U.S. and South Africa are launching a campaign to map marine, freshwater and terrestrial species and ecosystems in one of Earth’s biodiversity hotspots: the Greater Cape Floristic Region at the southwestern edge of South Africa.

NASA will fly planes over the area for six weeks in 2023 to measure the height and structure of vegetation and collect ultraviolet, visual, thermal and other imagery across terrestrial and aquatic ecosystems. Satellites will gather additional data. Teams on the ground will make observations at locations of particular interest, logging plants and, possibly, animals they detect.

Using these data, the team will map the region’s biodiversity, providing estimates of the distribution and abundance of species and the boundaries of ecosystems, and researching how biodiversity impacts the physical environment and vice versa. In other words, the campaign will help scientists understand the structure, function and composition of ecosystems in the study area.

“This is a broad collaboration between several organisations,” says Adam Wilson, PhD, principal investigator and a biogeographer at the University at Buffalo (UB). “The Greater Cape Floristic Region is a really fascinating place — it has extremely high plant diversity, and there’s been dramatic environmental change over the last 50 years, due to both climate and land use change.

“Our data will capture this region’s biodiversity in greater detail than ever before from a plane or satellite. In combination with the field observations, these new data will help us understand this dynamic region and improve our ability to monitor biodiversity from space globally.” 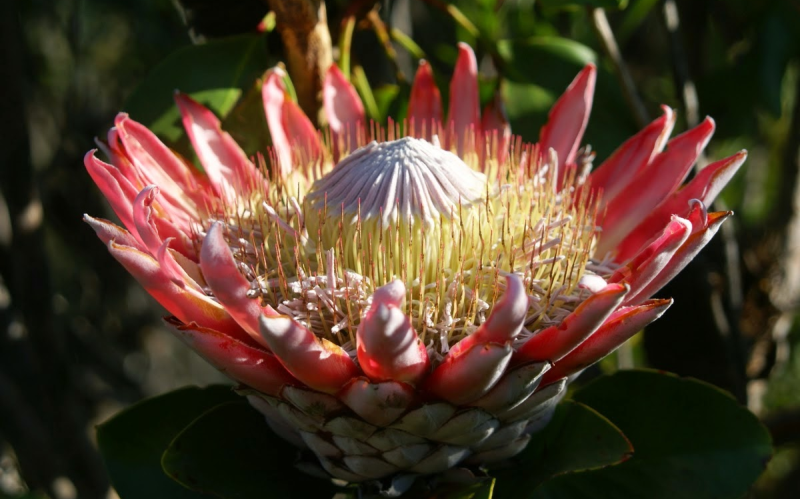 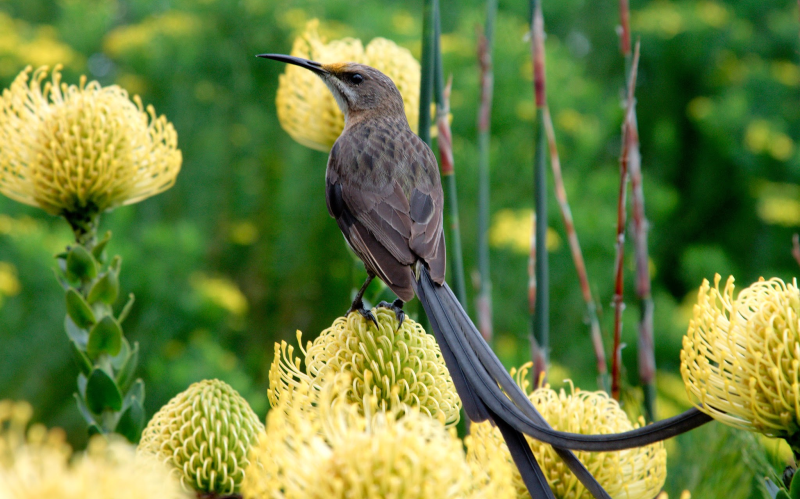 A Cape sugarbird pauses in the fynbos, a belt of shrubland in South Africa’s Cape Floristic Region. (Picture: Adam Wilson)

Detecting changes in the state of Fynbos ecosystems

The project — titled, “Marine, Freshwater and Terrestrial Biodiversity Survey of the Cape (BioSCape)” — is funded by NASA, with UB researchers receiving $873 000 in NASA funding to complete their share of the work.

“Much of the research in Earth observation has been conducted in the world’s forested ecosystems, like the Amazon or northern temperate forests,” says Moncrieff, scientist with the South African Environmental Observation Network. “But non-forest ecosystems harbour a substantial proportion of the world’s biological diversity, and perhaps the most diverse of these non-forest ecosystems are the shrublands of the Greater Cape Floristic Region in South Africa.

“BioSCape will bring the most advanced NASA remote sensing technology to this region, facilitating a large amount of research into remote sensing of biodiversity beyond the forest edge. We hope that by mapping plant biodiversity and its function, we will be able to show the link between important ecosystem services that many people here depend upon and the unique flora of the region.” 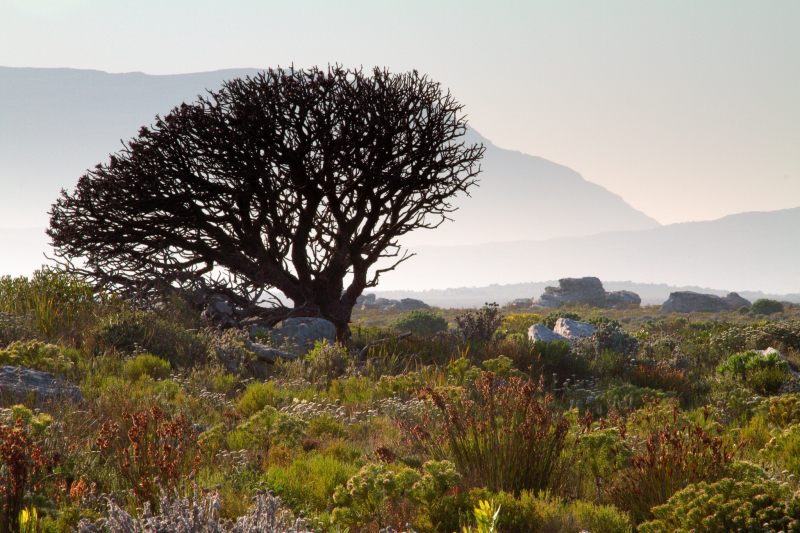 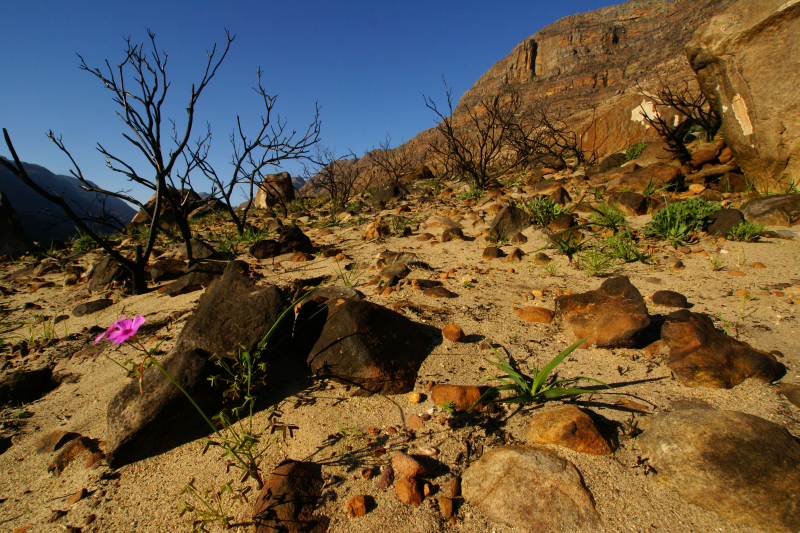 New plant life emerges in the fynbos of South Africa after a wildfire. Such fires, which help many native plants reproduce, make it difficult to detect unusual changes in vegetation.  (Picture: Adam Wilson)

Slingsby, lecturer at the University of Cape Town, adds, “The BioSCape campaign really is a great opportunity, not only for boosting the use of remote sensing in the region, but for driving innovation in remote sensing of biodiversity in general. The shrubland ecosystems in the region are hyperdiverse and have complex spatial and temporal natural dynamics due to fire, seasonality, habitat heterogeneity, etc., and will really put the science teams to the test. The aquatic ecosystems will be no less challenging.”

“The world is facing an extinction crisis,” says Hestir, associate professor of civil and environmental engineering at UC Merced. “We are experiencing the sixth great extinction in the history of the Earth, with unprecedented rates of species loss. Understanding the diversity of life, what drives it and how it might change in the future is critical to maintaining and protecting life on Earth — for us and all creatures.”

Panoramic view of the Cape of Good Hope. The fynbos of South Africa is an ecologically important shrubland found in the country’s Greater Cape Floristic Region, one of the richest repositories of plant life on Earth. (Picture: Adam Wilson)

In a separate but related project in the Cape Floristic Region, Wilson is working with a team that includes some of the same partners to develop a tool that uses satellite remote sensing and AI to monitor ecosystems in the area. The goal is to detect fires, land-clearing, the spread of invasive plant species and other unusual damage to vegetation.

The $483 000 effort — also funded by NASA — is a collaboration among UB, SAEON, the University of Cape Town, CapeNature, the Nature Conservancy in South Africa and South African National Parks.

“The idea is to create a decision-support tool that can support monitoring and management of biodiversity,” Wilson says. “The system will flag unusual ecosystem changes, such as invasive species outcompeting native species, or land cover change in protected areas, so that teams on the ground can then go check it out to learn more about what’s happening.”

This project will also leverage the expertise of Yingjie Hu, PhD, UB assistant professor of geography and a co-investigator on this project. Hu is an expert on geospatial artificial intelligence (GeoAI). One challenge of monitoring biodiversity and ecosystem changes in the Cape Floristic Region is distinguishing between natural changes — such as wildfires that occur regularly and are vital to the health of the local ecosystem — and anomalous changes that threaten biodiversity. Hu’s work will integrate AI and ecological modelling to facilitate development of a system that can make these distinctions.

Foggy conditions on the Cape of Good Hope, the southwesternmost point of the African continent and part of the Greater Cape Floristic Region. The region has a Mediterranean climate (hot, dry summers and mild, wet winters). Fog is one of the only sources of moisture during the hot summer months. (Picture: Adam Wilson)