A decade of offshore invertebrate monitoring

Historically, marine invertebrates caught by bottom trawling were rarely considered in the sampling strategies of the marine research and commercial trawlers operating around South Africa.

However, in recent times they have become an important component in implementing the ecosystem approach to fisheries management and advances foundational ecosystem knowledge required for the hake industry to maintain its eco-certification through the Marine Stewardship Council (https://fisheries.msc.org/en/fisheries/south-africa-hake-trawl/).

Invertebrate monitoring is conducted in collaboration with the demersal research trawl surveys run by the Department of Forestry, Fisheries and the Environment (DFFE), the primary objective of which is to conduct stock assessment surveys for key demersal fish. The primary goal of collecting associated invertebrates is to build foundational biodiversity knowledge and monitor these species in South Africa’s offshore ecosystems.

The surveys occur annually, with trawl surveys being undertaken in January to February off the west coast and in March to May off the south coast (see map below). Every year new distribution records and, occasionally, new species are discovered. This year’s south coast survey promised to be no different.

The demersal team departed Cape Town harbour on 9 April for a 39-day research cruise which extended from Cape Agulhas to Port Alfred between depths of 70–700 metres.

Typically, demersal surveys are divided into two legs of three weeks each to allow a crew change-over and to stock up on fuel and fresh produce. However, due to the Covid-19 pandemic this change-over was not permissible, meaning that the two invertebrate team members, Grant van der Heever (SAEON) and Luther Adams (South African National Biodiversity Institute – SANBI), would be calling the FRS Africana home for the entire six weeks and would only set foot on terra firma again on 18 May!

Fortunately, the south coast is an area of high endemism and biodiversity, promising an exciting trip for both team members.

Despite numerous bad weather days and some mechanical challenges, the voyage was a success, with several rare and interesting invertebrate collections contributing to SAEON’s ever-growing database.

One of the most diverse trawls of the survey yielded a total of 46 invertebrate species, which consisted of an array of colourful corals, sponges and sea-fans along with the crabs, sea-slugs and starfish which call these ecosystems home (see image above). Undersea forests such as these form complex, structured habitats that support diverse marine ecosystems.

Some of these ecosystems are home to medically important organisms with cancer-fighting properties, such as the worm-like colonial hemichordate, Cephalodiscus gilchristi (image below left). This unusual agar animal produces a tumour-inhibiting compound which has been identified as one of the most potent compounds ever tested against cancer.

At a depth of 638 metres, it is dark and cold and not many species/animals can survive there, but those that do are often rare and weird, such as the bioluminescent blue crown jellyfish, Cephea sp. (image below right), which was recorded for the first time in a trawl net at this location. 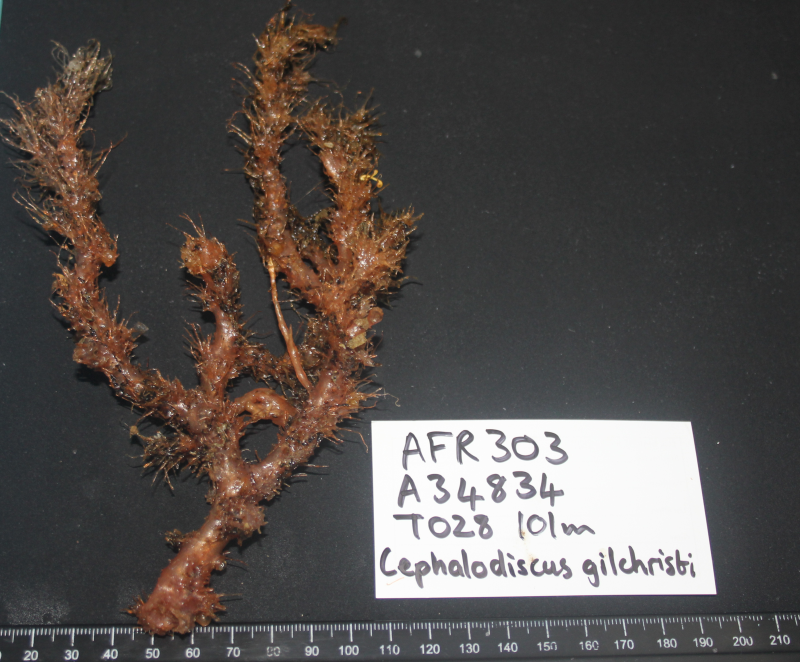 The unusual agar animal Cephalodiscus gilchristi produces a tumour-inhibiting compound which has been identified as one of the most potent compounds ever tested against cancer. 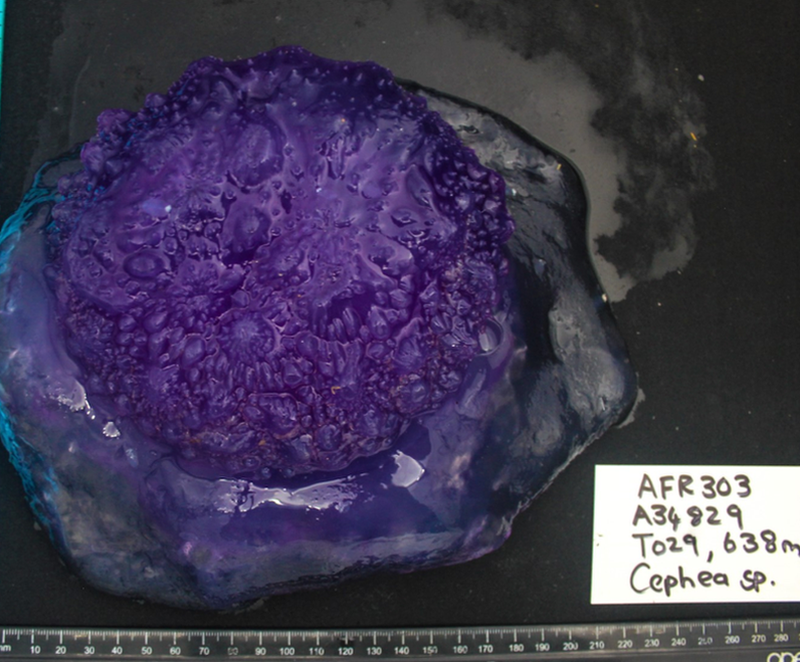 The bioluminescent blue crown jellyfish recorded at a depth of 638 metres. Its colour ranges from blue to purple. More information on this and other species is available in the Field Guide to the Offshore Marine Invertebrates of South Africa.

After a decade of invertebrate monitoring, SAEON’s database continues to grow the foundational biodiversity knowledge required by scientists and managers to accurately classify, describe and map our offshore benthic ecosystems.

It is only through consistent, long-term monitoring projects such as these that we will be able to detect changes in our offshore systems and implement effective environmental policies that will benefit both the ocean and those who rely on it.

When the call for willing participants to assist with invertebrate sampling was distributed, Luther Adams, who was on the brink of completing his MSc, jumped at the opportunity.

When asked about his experience he said: “It was profound to finally hold and scrutinise bryozoans, corals and sponges that I had previously only seen in images from a remotely operated vehicle during my MSc. I absorbed the wealth of knowledge and skills from fellow research scientists on the cruise as well as from the crew and have established enduring connections which I trust will lead to future collaborations as I develop into a research scientist spearheading marine ecosystem research in South Africa.” 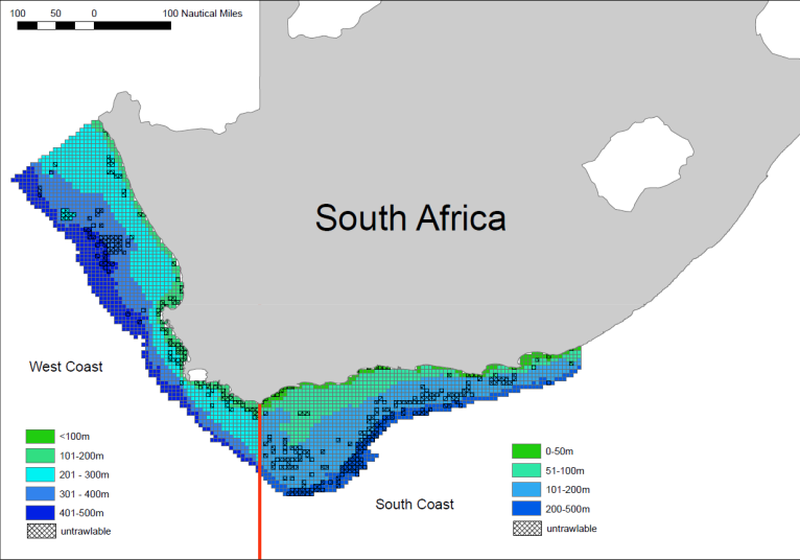 Map showing the extent of the annual demersal trawl surveys conducted by the Department of Forestry, Fisheries and the Environment. The red line indicates the border between the west (left) and south (right) coast. 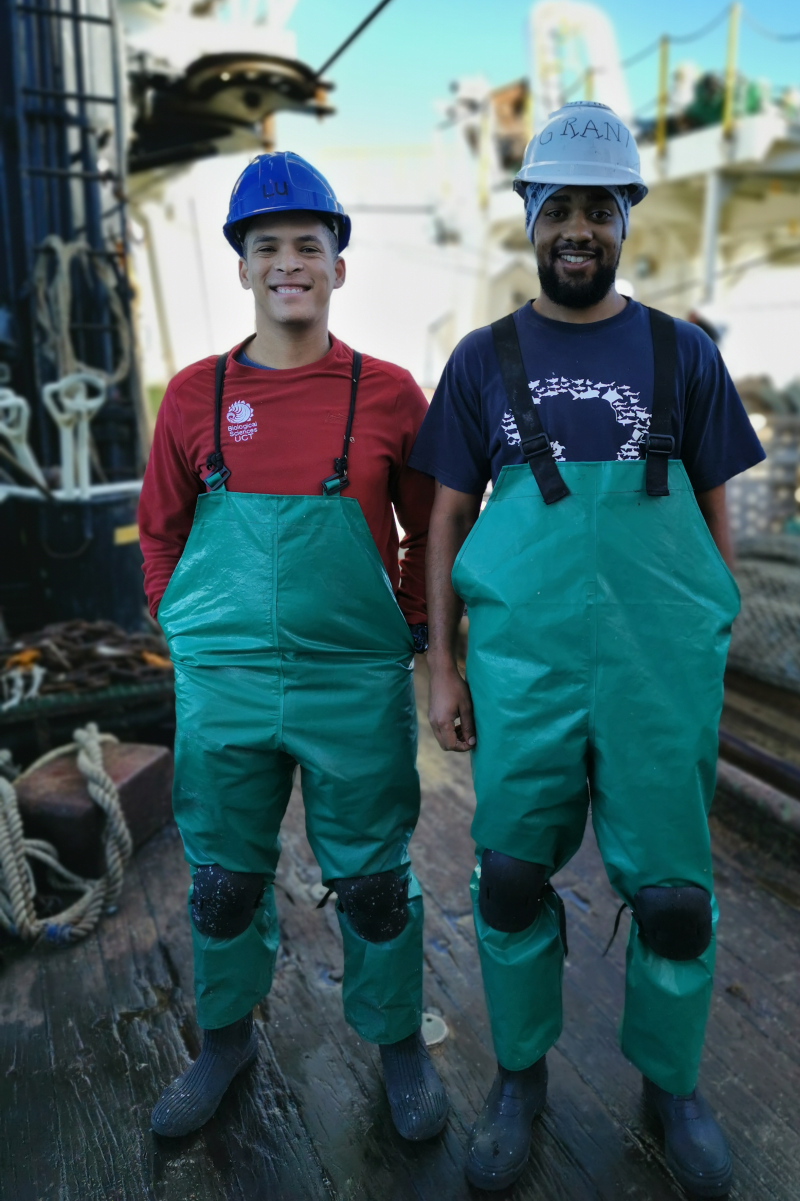 Luther Adams (left) and Grant van der Heever still smiling after more than a month of invertebrate sampling out at sea.