In an article titled Brown locust control: we’re getting it wrong, published in Farmer’s Weekly on April 29, Dr Joh Henschel, a research associate at SAEON’s Arid Lands Node, says that while the brown locust is one of the most destructive agricultural pests in South Africa, our understanding of its habits and our efforts at controlling it are patchy and haphazard. He calls for a paradigm shift in our approach to the management of locust populations.

Dr Henschel is cited in an article, Veldkennis vul gapings published in Landbouweekblad of July 7. The author refers to an article written by Dr Henschel titled “Locust times – monitoring populations and outbreak controls in relation to Karoo natural capital”, which was published in Transactions of the Royal Society of South Africa in 2015. In the article Dr Henschel mentions that the amount of money and energy spent on the eradication of locusts over the last century is significantly more than that spent on brown locust research.

The coordinator of SAEON’s Grasslands-Forests-Wetlands Node, Susan Janse van Rensburg, is cited in an article titled Mountains play a vital role in water provision; we need to focus on them, published in The Witness of July 13. Susan was a speaker at the Southern African Mountain Conference 2022 held in the Drakensberg earlier this year. She spoke about the in-situ environmental monitoring that is being done in important mountain areas, including Cathedral Peak, the heart of the Central Drakensberg. She introduced SAEON’s new data portal for researchers to access and share data about mountains, and not just in South Africa, but across the whole continent.

How protecting our mountain ranges can help during a water crisis, an article published in IOL Online on July 6, mentions that research about mountains can be uploaded to a data portal created by SAEON. This includes research from the African continent as a whole, and not just SA. 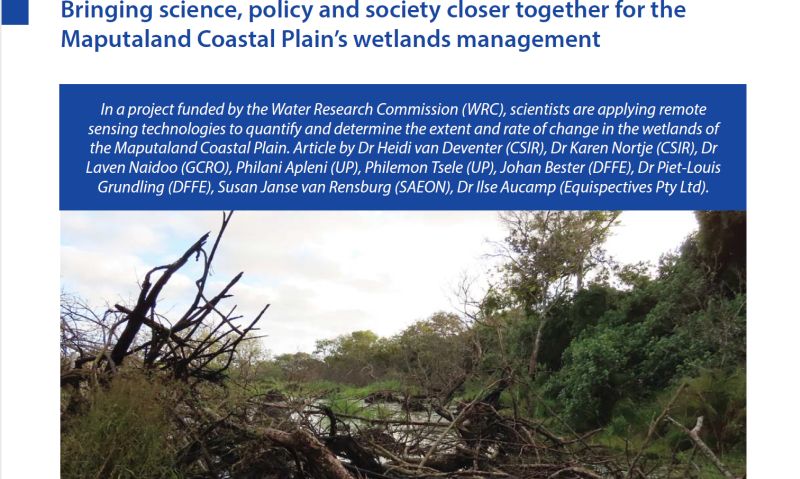 An article titled Bringing science, policy and society closer together for the Maputaland Coastal Plain’s wetlands management, was published in The Water Wheel of May/June 2022. Co-authored by Susan Janse van Rensburg, coordinator of SAEON’s Grasslands-Forests-Wetlands Node, the article describes how scientists are applying remote sensing technologies to quantify and determine the extent and rate of change in the wetlands of the Maputaland Coastal Plain.