A growing network of African woodlands data: A reflection on the herbaceous training workshop hosted by the SEOSAW in Morogoro, Tanzania

The Socio-Ecological Observatory for Studying African Woodlands (SEOSAW) is a fast-growing network of scientists and woodland survey plots in Africa. Their main goal is to understand the response of African woodlands to global change.

Background to the SEOSAW network

SEOSAW is an activity of the Miombo Woodlands Network that seeks to integrate existing vegetation data across African woodlands and savanna ecosystems. The extensive vegetation data contained in the SEOSAW database can be used to answer questions relating to regional long-term vegetation dynamics.

Seeking to have a standardised approach to collecting vegetation data, the network has developed protocols for collecting information relating to the diversity, abundance and condition of large and small trees, course woody debris, soil and (recently added) herbaceous and shrub methodologies (soon to be made public).

SEOSAW uses a network of plot-based (permanent and once-off) sampling methods to collect vegetation data. Currently the network is in operation in 12 African countries, involving 84 researchers. As it stands, information from 9 863 woodland plots is captured on the SEOSAW database.

In 2020, the SAEON Arid Lands Node team – led by Dr Helga van der Merwe, Tshililo Ramaswiela and Buster Mogonong – tested the SEOSAW methodology at Benfontein Nature Reserve as part of the EFTEON site development, where five one-hectare permanent plots had been established around the Savanna eddy covariance flux tower. In these plots, large and small trees and herbaceous data were collected following the SEOSAW protocol. This information is available on the SEOSAW database and represents some of the most arid systems in their network.

From 16 to 25 March 2022, the SEOSAW network hosted a workshop in Morogoro, Tanzania, where they were testing the herbaceous protocol in Kitulangalo woodlands. The training focused on how to sample herbaceous plants following the Global Grassy Group methods.

The training saw early-career scientists and students interact with one another to build networks for the future. Sokoine University of Agriculture students joined the SEOSAW participants on the last day of the fieldwork to learn about the herbaceous sampling methods and existing protocols.

The training workshop kicked off with a meeting at the Tanzanian Forestry Research Institute (TAFORI), where the plan for the workshop was introduced by Professor Sally Archibald of the University of the Witwatersrand. The training proceeded into the field where we were welcomed by some forest rainfall on our first day out in the woodlands.

The training was field-based, and the presence or absence of herbaceous species (grass and forb) was recorded in four treatment sites, which included tilled, thinned, open grassy and control sites respectively.

Sampling methods of the herbaceous diversity and biomass were tested in the Kitulangalo woodlands. We collected diversity data and workshopped how to perform biomass sampling in the field. Diversity data was collected using a circular plot of one metre in diameter and recording all species found within that plot. The plots were replicated 21 times in an adjusted 50 m by 50 m rectangular plot. The sampling method for species diversity was similar to that used by the Arid Lands Node team at Benfontein Nature Reserve.

The samples were separated into grass, forb, litter and wood. The fresh (wet) weight of each of these samples was taken using a kitchen scale in the field. Once finished, a grab sample of grass and forb categories was collected around the 50 m by 50 m to get a representative biomass of the entire plot. This was weighed in the field to get the fresh weight and taken to the lab for drying and weighing to obtain dry mass.

One other critical component required when collecting herbaceous data is vouchering of specimens found in the sampled area. This involves sampling DNA material and pressing herbarium samples for correct identification of the species. Other general information to take note of included metadata information about the site in which the data is collected. For example, parameters such as soil characteristics, canopy cover, GPS location and site photos should be captured along with the collection of herbaceous data.

I would like to express my appreciation to the SEOSAW steering committee for awarding me travel and accommodation funding to attend this workshop, as well as Dr Penny Mograbi and Lorena Benitez for the logistical organisation. I would also like to thank Prof. Sally Archibald, Dr Casey Ryan and Dr Elisha Njoghomi for the exciting training workshop plan you had put together, as well as TAFORI for hosting the SEOSAW participants. Finally, to all the participants of the SEOSAW training workshop, I hope we keep up the networking going forward.

Get more information on the SEOSAW here. 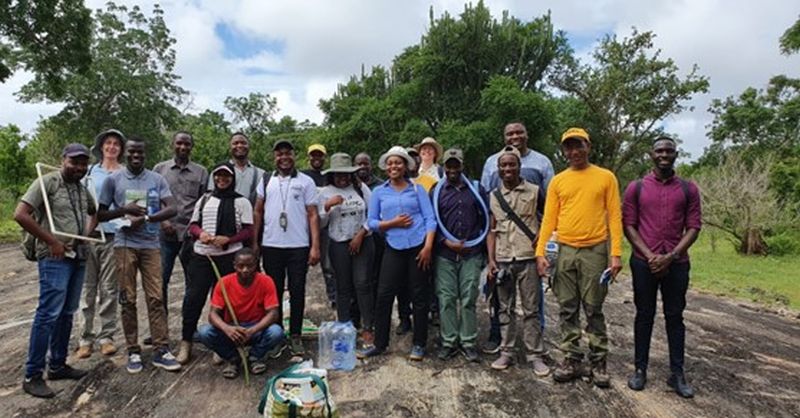 SEOSAW participants with students from Sokoine University of Agriculture, Tanzania, on the last day of field work in the Kitulangalo woodlands (Photo: SEOSAW) 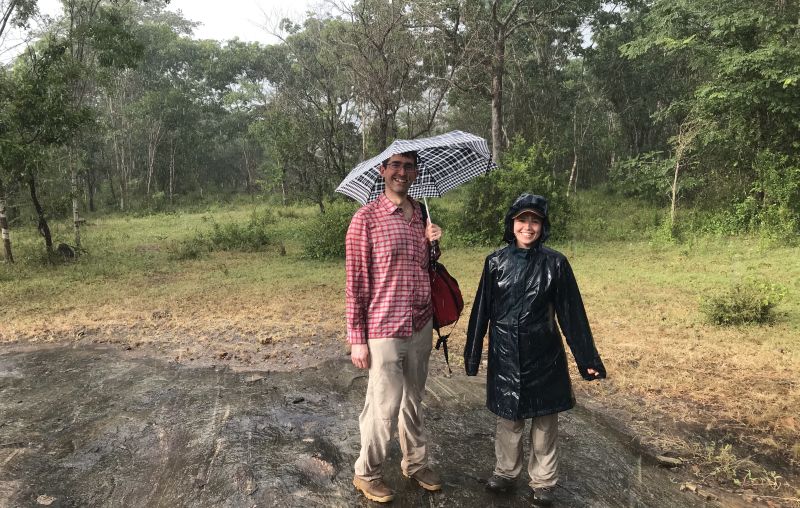 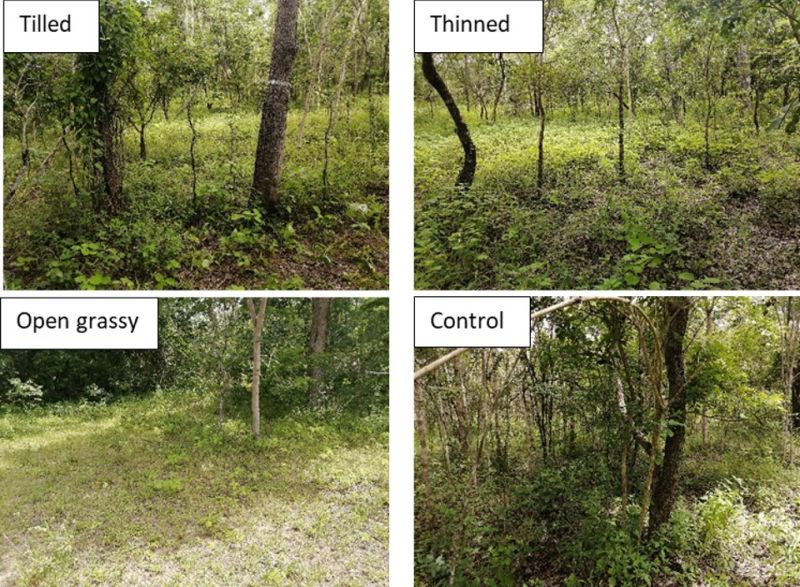 Site photos of the four treatments where the herbaceous protocol was tested (Photos: Buster Mogonong) 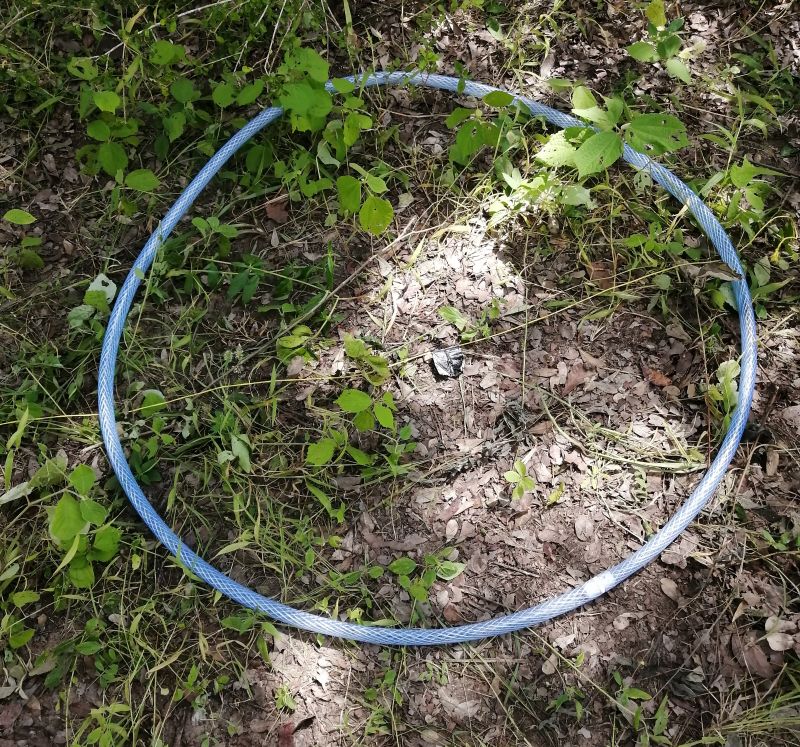 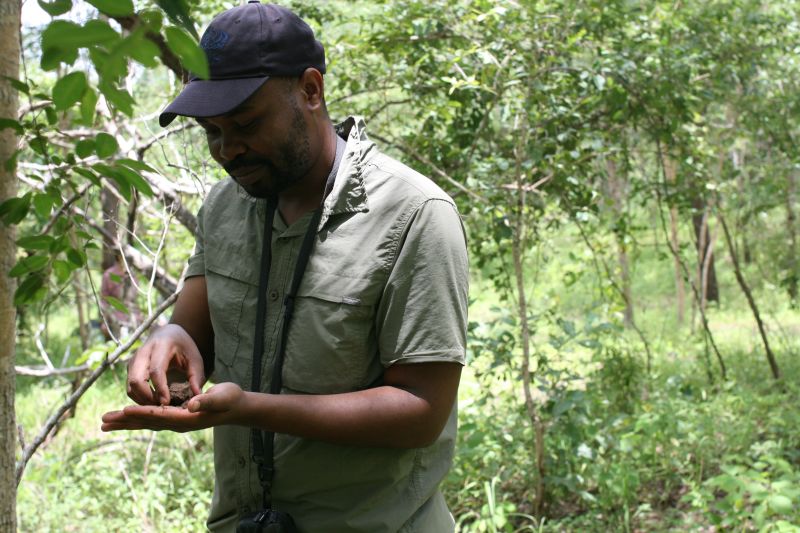