The National Research Foundation’s strategy for 2030 is seeking to advance the impact of research for the benefit of society. Impact cannot always be predicted, but there are ways to enhance impact both with respect to knowledge advancement and societal impact. One strategy is to ensure engagement through the collaborative development of proposals in the early stages of planning and then adopting inclusive research processes when conducting the work.

NRF-SAEON has been adopting these strategies with its nomination of the Maputaland Coastal Plain as one of the six Long Term Ecological Research (LTER) platforms in South Africa. In requesting permission to work in this region, which is predominantly Ingonyama Trust land managed by the traditional councils, we sought to solicit input to determine their key environmental challenges.

Water security consistently emerged as a key concern within the region. This in the context of an impoverished, nutrient-poor region with minimal opportunity for livelihoods where conflict for water and ecosystem services is escalating. Previously, modelling studies attributed much of this to commercial timber plantations in the region. More recently, the role of below-average rainfall has been identified as a contributing factor. Human use is relatively minor compared with these two drivers. In workshops with community members, concern over woody species encroachment and their water use emerged.

Lake Sibaya southern basin still dangerously low despite good rains recently (< 7 m amsl). The northern part of the Maputaland Coastal Plain has been experiencing water insecurity for over a decade.

Area selected as one of six EFTEON landscapes

SAEON has responded to issues raised by community members and is focusing its studies on the impacts of climate change and land use/land cover on the hydrological resources of the Maputaland Coastal Plain. Through our involvement in the region and forging of relationships within the landscape where our operations are embedded, we were able to facilitate a successful proposal to have the region selected as one of the six Expanded Freshwater and Terrestrial Environmental Observation Network (EFTEON) landscapes for South Africa. The honourable Inkosi K.T.H. Nxumalo, King of the Mabasa community, not only supported the proposal, but offered to host the landscape and was a lead author on the proposal submitted.

Granting permission for the first EFTEON Automatic Weather Station to be placed within the Mabasa Tribal Court grounds, the Tribal Council suggested a World Wetlands Day 2022 celebration hosted by SAEON and the council and including the official opening of this weather station as part of the celebrations.

World Wetlands Day, celebrated annually on 2 February, aims to raise global awareness about the vital role wetlands play in the lives of people and the planet. The Mabasa Traditional Council invited SAEON to assist in facilitating their Wetlands Day of 2022 on 11 February in Maputaland. The request was to arrange researchers and organisations active in the area to provide feedback on different projects to the Traditional Council and members from the community.

The event was attended by the honourable Inkosi K.T.H. Nxumalo of the Mabasa Tribal Council, a number of council members and members of the community. Due to Covid-19 restrictions at that time, it was not an open day event. Representatives from the WildTrust, Wildlands and iSimangaliso Wetlands Park Authority also attended.

SAEON facilitated presentations from different organisations offering environmental education and feedback on the research projects taking place in the area. The organisations that formed part of the Wetlands Day event were SAEON, the Council for Scientific and Industrial Research (CSIR), the Agricultural Research Council (ARC), JG Afrika, GroundTruth and the Endangered Wildlife Trust (EWT). To reflect the interdisciplinary nature the EFTEON and SAEON platforms are aiming to achieve, participants involved established scientists, education practitioners and students across several disciplines.

First on the programme, Siphiwe Mfeka, assistant technician at the Grasslands-Forests-Wetlands Node, presented the results from SAEON’s monitoring activities and introduced work done by SAEON as part of a Water Research Commission (WRC) project to investigate the links between economics, water security, land use and climate change with the communities in the region. He explained the concept of climate change and the vulnerability of this specific landscape to changes in local rainfall.

This resulted in several questions which, through being answered, assisted in building a more accurate and comprehensive understanding of climate change for those attending. Having someone from the region, like Siphiwe, explaining the scientific concepts and results competently in uninterrupted Zulu was extremely valuable and appreciated by those attending. 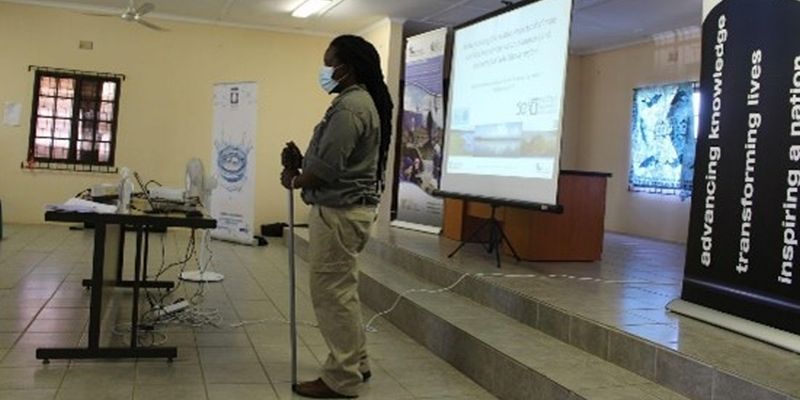 Siphiwe Mfeka, assistant technician at the Grasslands-Forests-Wetlands Node, provides feedback on the science activities of NRF-SAEON. 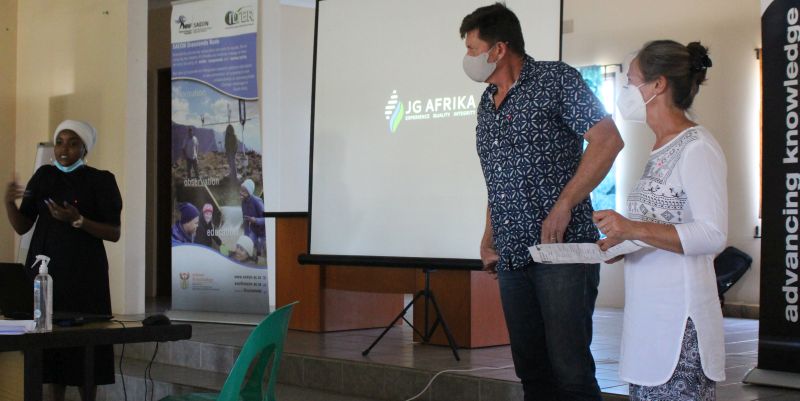 Next on the programme was Dr Althea Grundling from the ARC, who presented on the research they have been conducting in the area. ARC researchers have been working on several projects, including mapping wetlands in the area. Their findings show that wetlands are not being used wisely. There has been an increase in the number of dried (desiccated) peatlands and peatland that burnt in the last five years (2016–2021) compared with the 23 years prior to the 2015/6 drought.

Dr Grundling and her students are working on projects that aim to rehabilitate and restore degraded wetland systems in the area. An impact spin-off from this is that SAEON will facilitate a follow-on event with wetland farmers in the area and the ARC to explore good practices to help avoid degradation of these key resource areas.

Mark Schapers from JG Afrika then presented on work done in the region for many years. JG Afrika has more recently been part of a project contracted by the uMkhanyakude District Municipality to determine the yield from the region and to ascertain the feasibility of further extractions from Lake Sibaya to augment the water supply in the region. As part of this project, additional monitoring wells were developed. SAEON and JG Afrika have been collaborating on data collection from these wells. The findings determined that plantations have a significant impact on the lake water balance, whereas abstraction does not appear to have as significant an impact on the overall lake volume but would cause a significant drop over time if it was increased to the required 10 000 m3/day.

Mark Schapers also emphasised that the reduced rainfall (possibly a signal of climate change) has had a significant impact on the drop of the water level over the past 30 years. Combined with land-use changes, the impact is devastating. The bottom line was that to release water for human and ecological needs, plantations need to be reduced and unless this is done, no significant additional abstraction from the lake would be sustainable.

Previous work has shown that forested wetlands (including riverine, floodplain and swamp forests) are being cut down and transformed to cultivated land. At the current rates of cut down, it is predicted that 80% of these forested wetlands will be lost by 2060. Their study is undertaken in three parts. First, they intend to map three different ecosystem functional wetland types (forested, macrophyte and marsh), then undertake social community engagements before developing a framework for monitoring wetlands with remote sensing. SAEON and the ARC are collaborating with the CSIR on this project. 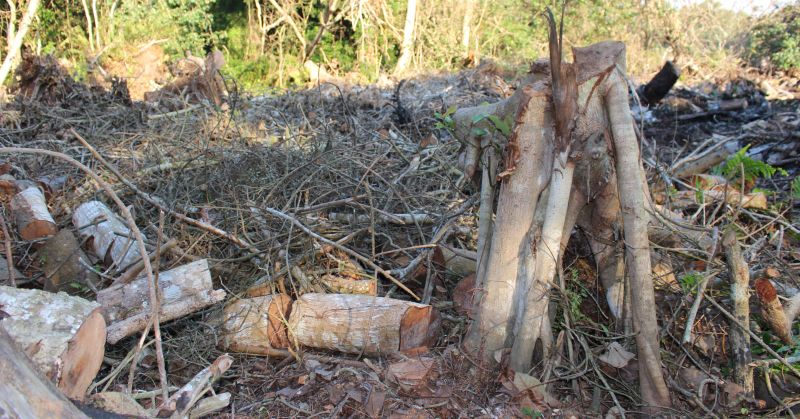 Unsustainable clearing of forested wetlands poses a threat to both biodiversity and important wetland ecosystem services that promote water availability in the region. 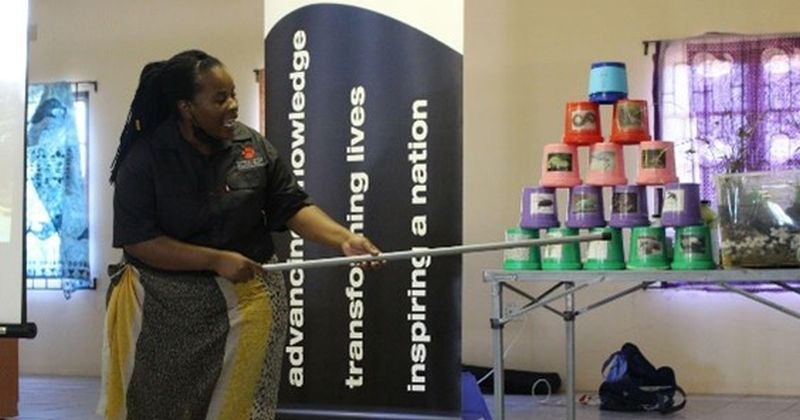 Nonkululeko Nzama from EWT demonstrating the value of the food chain and what would happen if the lower orders, which form the basis for our life and livelihoods, are removed.

Nonkululeko Nzama from EWT offered environmental education. She taught the community more about the concept of alien species and how to use iNaturalist to determine if a particular species is alien. She demonstrated the importance of conserving the natural environment, especially wetlands, and explained how frogs play a vital role in indicating the state of the environment. In a very engaging manner, she showed how vulnerable frogs are to pollution and how they can serve as an indicator to help us determine if water is clean, emphasising that taking care of frogs in the ecosystem is essential. Information was also provided about the endangered Pickersgill’s reed frog that is protected.

A powerful demonstration of the food pyramid, emphasising that every species in the ecosystem has a function, got the audience nodding in understanding with lots of smiles and laughs. Her presentation was well-received, and some community members commented how grateful they were for the information she shared because they would kill frogs not knowing how important they are to the environment.

Hlengewe Cele (WRC) explained the WRC’s role in the water research space. Having seen first-hand through this knowledge exchange what challenges the Maputaland Coastal Plain is facing, she undertook to profile the region on her return to the WRC’s head office. 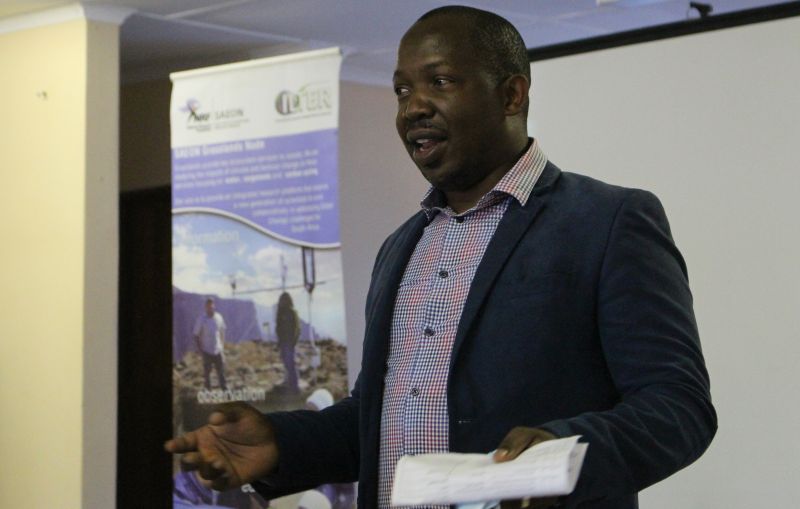 The honourable Inkosi K.T.H. Nxumalo, King of the Mabasa Traditional Authority, requesting continued long-term cooperation with scientists and organisations to assist in addressing the challenges the region faces. 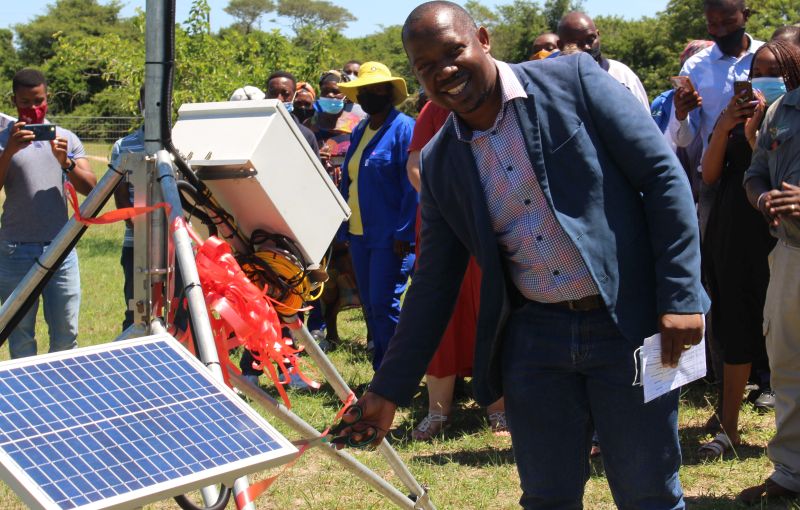 The honourable Inkosi K.T.H. Nxumalo, King of the Mbasa Traditional Authority, expressed his gratitude to the researchers for their presentations and stated that he was delighted that they had taken an interest in the area. He emphasised that the community, himself included, were happy to be educated on various environmental issues and mentioned that even before iSimangaliso Wetland Park was established, the communities took good care of the environment by using it sustainably. He said that his dream was to see that happening again.

Emphasising that the water issue was a serious one and that it was harming the community, he expressed faith that, together with the scientists, a solution will be found. He emphasised that he agreed with the scientists, and especially with Mark Schapers, that the impact of the plantations on the decline of the groundwater system and water levels of Lake Sibaya was significant. He thanked SAEON and EFTEON for their financial support that made the event possible and all those who travelled from far to share their knowledge with the Mabasa community.

The highlight of the event was when the honourable Inkosi K.T.H. Nxumalo unveiled the new EFTEON automated weather station. The King, the council and the community members were pleased about the weather station. One member of the council joked that their days of waiting for Mkhushulwa (a famous weather reporter) to predict the weather are over because they now have their own weather station in Mabasa. They were very curious about how it works and Siphiwe, who did the installation, explained all the components in detail and how they work. The systems will be set up with a live feed which will be shared with the community members. 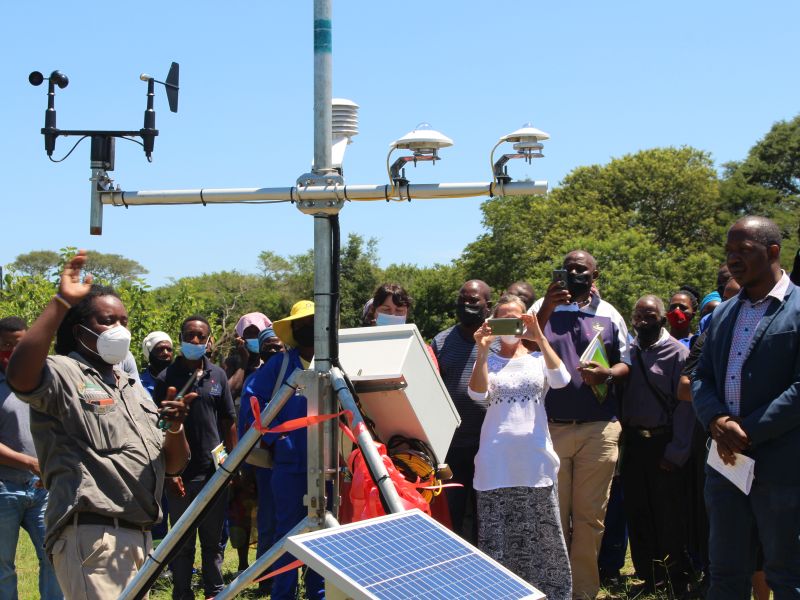 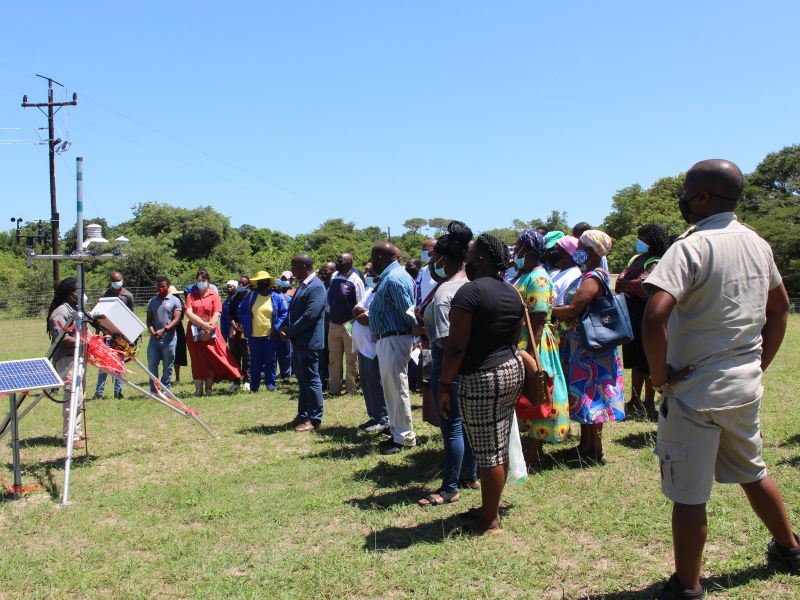 Siphiwe Mfeka explaining to the community and other stakeholders what all the different sensors measure.

Concluding the programme, Sue Janse Van Rensburg, coordinator of SAEON’s Grasslands-Forests-Wetlands Node, described the event as “a humbling moment” which left one with a real sense of partnership and collaboration between science and society.

“Although the need for more sustainable land and water uses is acknowledged, there is much work to be done to seek viable economic alternatives,” Sue explained. “Working with people on the ground and listening and learning from community members who have lived here all their lives have taught me so much and have enriched the science we do. While the science may be clear that plantations are a big source of the water scarcity problem, one cannot simply remove the people’s livelihood! That is why, if we want to have a meaningful impact, we need multidisciplinary collaborations working with communities to understand the social-ecological system so that we can collectively explore alternatives that may work in a changing climate. We are so grateful to all those who joined us in making the day a success.”