For tourists visiting a national park, private game reserve or any sort of protected area (PA), it will be obvious that wildlife is more abundant inside than outside its fence line or boundary. At least in South Africa this is mostly the case, especially when it comes to the Big Five or other large terrestrial mammals only visible inside PAs. After all, that is the main purpose of these areas and why tourists are attracted to them.

What is less obvious, is whether bird life benefits from PAs. Whether you are at home in the garden, driving the car around town or entering a PA, birds are everywhere to be seen due to their ability to cross over ‘hard’ boundaries. If you are a birdwatcher, you may have noticed that many PAs contain somewhat different suites of birds than those found outside.

However, depending on the PA’s natural habitat structure, plant composition or water availability and the type of land-use surrounding it, this difference may or may not be hard to spot. If there is a stark contrast between the composition of bird communities inside and outside a protected area, it is possible that specialist bird species are involved. These species struggle to adapt to unusual habitats and hence they are only (or mostly) found within the borders of a PA.

Typical South African examples of such specialist birds are the charismatic Southern Ground Hornbill and a handful of less-appreciated vultures like the seemingly common White-backed Vulture. These are mostly large, threatened bird species. Extreme measures are currently being implemented by various organisations and governments to prevent further declines in their populations. However, despite facing additional pressures from within PAs that threaten their future existence (for example poisoning for use in traditional medicine and the impacts of mammalian ecosystem engineers), the lessened human pressure offered by PAs has its benefits. 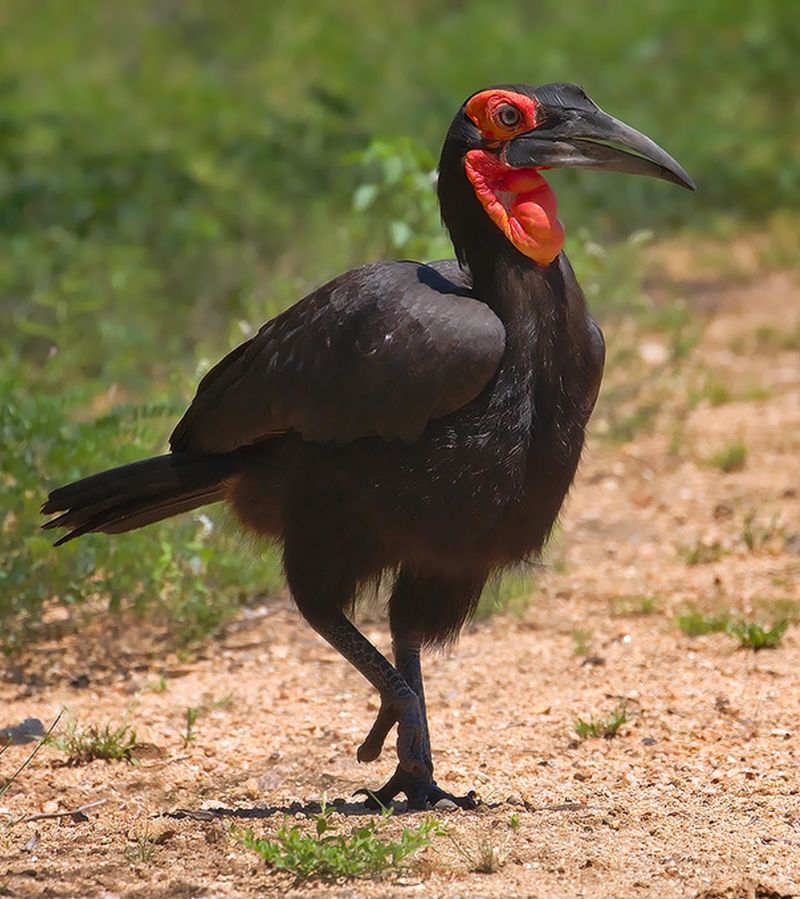 The Southern Ground Hornbill is a large, charismatic bird that enjoys tourists’ attention and the ‘protection’ of the Kruger National Park in part of its range. (Photo: Rion Lerm) 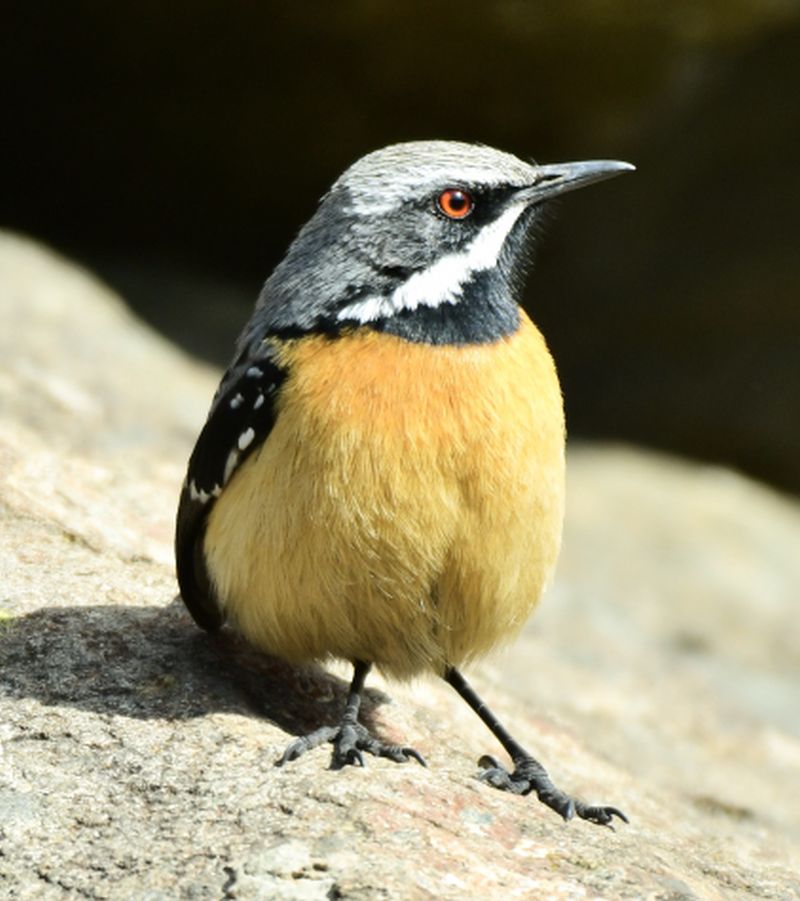 The strikingly coloured Drakensberg Rock-jumper (Chaetops aurantius) male. According to Lee et al. (2017), this is one of four South African birds that have been showing concerning declines, but its distribution falls nearly entirely outside of formally declared protected areas and it was not listed as a threatened species at the time of publication. (Photo: K.L. and C. Nel; Virtual Museum BirdPix record: 58935; https://vmus.adu.org.za)

So why are there struggling bird species despite the plethora of protected areas covering Africa’s land surface?

Many terrestrial protected areas were historically designed for primarily conserving large mammals. A country’s protected area network (specifically the aims for establishment, size, location and shape of these areas) may therefore put certain birds, animals other than mammals, or plants at risk.

For example, De Klerk and his co-authors found in 2004 that the distribution of half of 106 threatened Afrotropical birds (species found south of the Sahara Desert) were not covered by PAs. In 2010, Beresford and others showed that the habitats of a mere 14% of threatened African birds were covered by the PA network.

At the turn of the century, interest in the importance of PAs for conserving bird communities started to increase instead of merely focusing on individual, large and often charismatic mammal species. In 2011, Greve and her colleagues found that across South Africa, PAs seem to be important for birds because they offer unique resources not found in other areas.

On a smaller landscape scale, different processes are at play on bird communities. For example, Coetzee and Chown (2016) and Weideman et al. (2020) found that transformed areas outside the Kruger National Park in South Africa filtered out species with certain functional traits; this is called functional homogenisation and the specialist bird species are typically the losers here.

More recently, and back onto a regional scale, my colleagues and I, and David Storch and his colleagues from Prague’s Charles University in the Czech Republic, showed independently how the freshwater systems of a PA like the Kruger National Park are critical for conserving bird diversity (unpublished data presented at the 19th Savanna Science Network Meeting from ~1h34m into the session). For this specific PA, such results carry significant conservation implications because all six of its perennial rivers (flowing throughout the year) originate and pass through an array of land uses outside the PA’s boundaries.

Thus, although birds mostly benefit from the protection that PAs offer, this protection is dependent on certain factors. Fortunately, novel datasets such as those from bird atlas projects where citizen scientists collect data on the daily, have enabled researchers to monitor distribution patterns of bird species across large spatial and time scales inside and outside PAs. This will undoubtedly assist (and has been) in raising ‘red flags’.

What is less obvious and difficult to combat if identified, are the drivers of such declines or increases (in the case of alien invasive species such as the Common Myna).