It took 45 years of constant record-keeping, year-in-year-out, to determine why tenebrionid beetles have such extraordinarily high diversity in the Namib Desert. My recent analyses of these records revealed a cryptic complexity of time niches whereby a seemingly plain gravel plain undergoes a series of subtle changes that favour different species over time.

Since the 1950s, scientists have been wondering how so many beetle species can coexist in the middle of southern Africa’s driest desert, an area of low primary productivity. To cut a long story short: nearly all are ultimately dependent on irregular pulses of rainfall, but different species navigate differently through time – months, years, decades – since these singular, rare events.

The breakthrough was made thanks to diligent fieldwork and data collection by numerous interns and field technicians at the Gobabeb Namib Research Institute in Namibia at 15 pitfall traps installed two kilometres from the institute in March 1976 and monitored every two to three days ever since. An astonishing 54 tenebrionid species were recorded in these traps, 26 species being sufficiently abundant to analyse population trends over time. 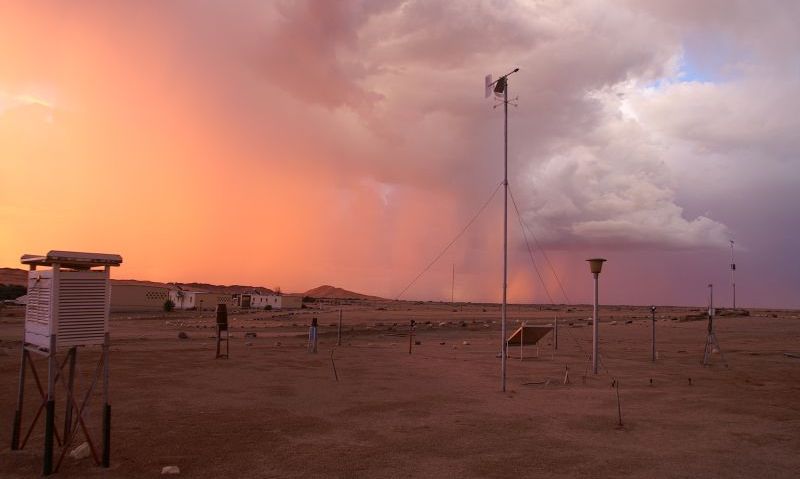 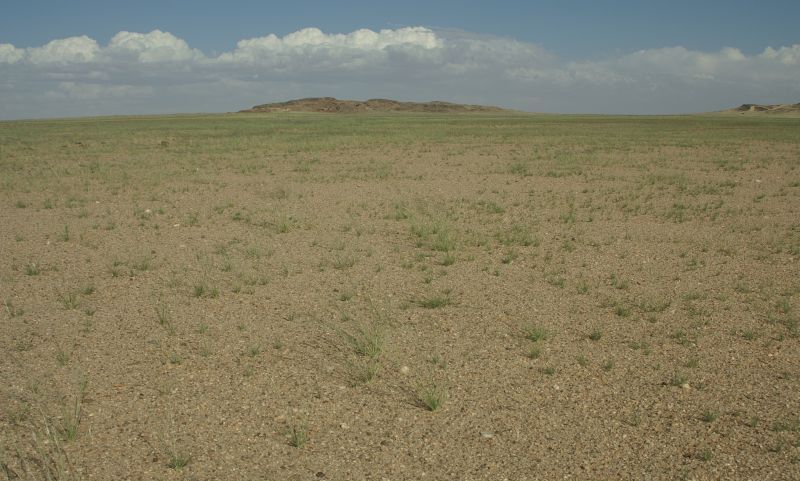 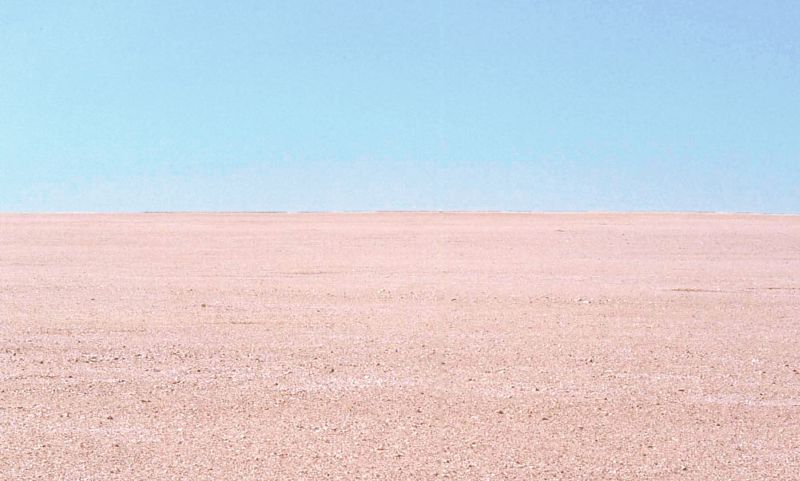 Rain events have been recorded at the Gobabeb Weather Station since 1963 (left). Effective rainfalls of over 11 mm per week cause grass to germinate, grow and seed (centre). The dry grass forms detritus, on which tenebrionid beetles continue to feed even when little remains many years after rainfall events, sustaining life on seemingly barren gravel plains (right).

These were the important events that added fresh detritus (litter) to the pool. Detritus comprises dead organic matter mostly coming from plants, such as dry leaves, stalks and husks. The quantities of detritus in the desert are akin to footprints of rainfall events, dwindling over the years. Detritus is the staple food for omnivorous tenebrionids, so the detritus pool and its gradual decay is critical for their populations over the years.

Over 20 000 species of the beetle family, Tenebrionidae, also known as darkling beetles or toktokkies, occur in temperate or tropical terrestrial biomes worldwide. They are abundant and conspicuous in arid lands, renowned for their extreme tenacity, coping with dehydration, heat and hunger, and getting moisture by unconventional means such as fog basking or direct uptake of humidity from the atmosphere.

These beetles lack developmental dormancy, but adults are long-lived, with some lifespans exceeding six years and generations overlapping. Desert populations go through periodic bottlenecks, bridging lean times with extreme ecophysiological resilience and bet-hedging reproduction whereby females lay eggs whenever they have gained enough resources to do so, every day in ideal conditions.

Unusually heavy rainfalls in 1976 (106 mm) and 1978 (85 mm) gave the Namib study a booming kick-off. Two decades of much drier conditions followed (annual rainfall 0–23 mm) when detritus receded, as did beetle numbers, bottoming at 0.18% of boom abundance.

In the years following several effective rainfalls between 1997 and 2005, beetle abundance rose to 38% of the previous peak. Years with unusually high rainfalls averaging 50 mm followed from 2006 onwards, with beetle abundance climbing to 279% of the first peak. This roller-coaster pattern of abundance was driven by the moisture regime and detritus availability, confirming the first main hypothesis.

However, within the envelope of general abundance, the 26 examined species displayed somewhat differing trends. With correlation and cluster analyses, species were assigned to six patterns, which they followed with variations.

While populations of three species quickly irrupted after effective rainfalls and crashed a year later, the five most abundant species tracked the quantity of detritus over several years. Eight species took their time, their populations increasing unhurriedly after heavy rainfalls and declining even more slowly over the following decade. Two species cued to winter rainfalls with prolonged soil moisture, which occurred at bidecadal intervals. These two species were best at avoiding the narrowest bottleneck and were recorded in every study year.

Population trends for another species correlated negatively to all other species, increasing during rain-dry years and declining during years with rain. Finally, seven species with no permanent resident populations in the study area occasionally expanded their ranges from an adjacent habitat.

The overall effect of these six population patterns with variations yielded different beetle community compositions year on year. The seriation usually progressed steadily, sometimes meandering around a certain condition, but there was a run of punctuated shifts between 1990 to 1996, reflecting a sequence of considerable changes in the community during this extremely dry period.

In 2006, 30 years into the study, the community surprisingly returned to its initial condition. Even though the years that followed were moister than three decades ago, the seriation pathway was in roughly the same direction, indicating community cyclicity. 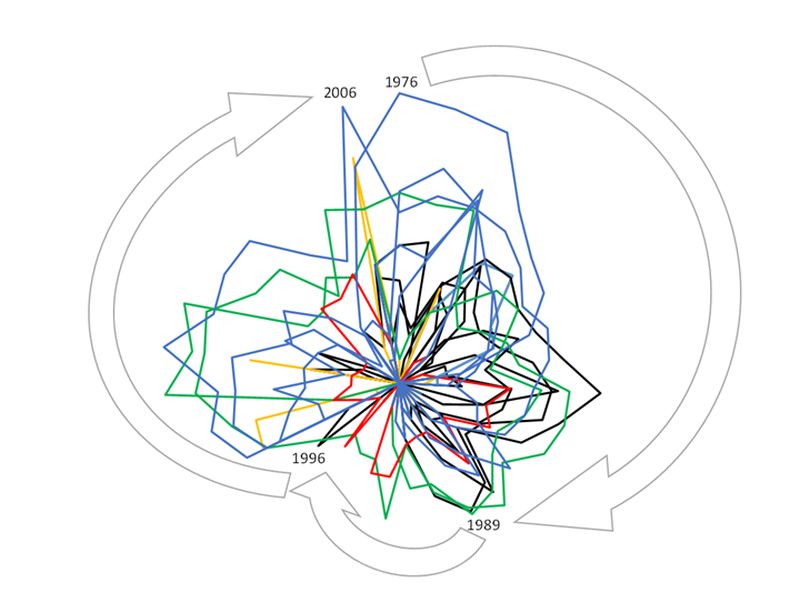 Radial chart of species abundance over the first 30 study years, showing how the community composition changes from year to year. Species dominance shifted with time after the 1976/78 rainfalls until most populations collapsed during the extreme drought between 1989 and 1996, then recovered at different rates after the first rain in 1997, finally, in 2006, completing the cycle by returning to a community composition similar to 1976. Species are colour-coded by group: A=blue, B=yellow, C=black, D=green, E=red (group F plots not shown). 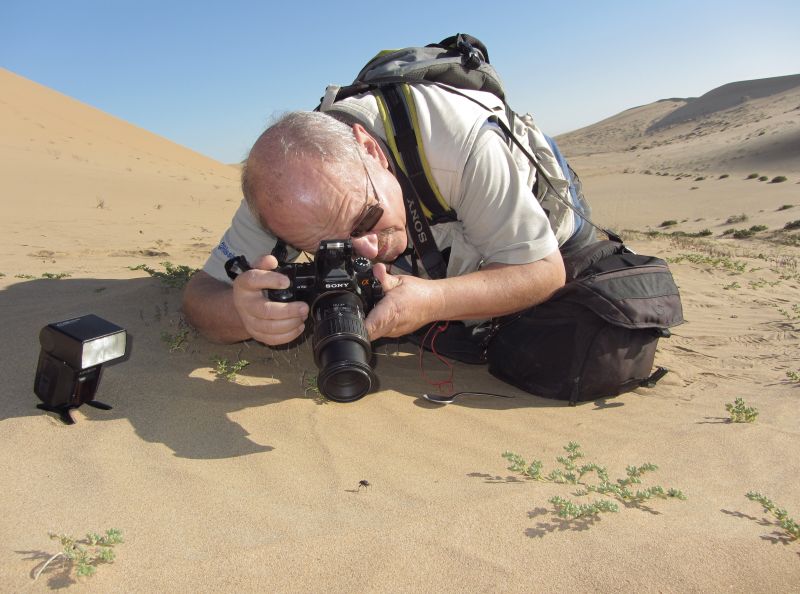 SAEON research associate Joh Henschel identifying a toktokkie in the field. He is currently analysing further long-term data of beetles from the dunes and other desert locations provided to him by Gobabeb.

The population dynamics of different species followed different trajectories, which had the effect that species abundance ranks constantly changed. The most important consumers in the community rotated.

Although the moisture regime appeared to be the primary driver of abundance, the community followed roughly parallel pathways 30 years apart with different rainfall conditions – during the decade 1979–1988, mean annual precipitation was 12 mm compared to 45 mm from 2009–2018, the wettest decade recorded at Gobabeb. This concurrence may indicate the existence of some other driver of community seriation in addition to moisture.

The puzzle of explaining how so many species coexist in such a plain low-productivity ecosystem with such a simple food web is resolved by recognising that these beetles’ niches may not only be defined by their biogeophysical features, but that temporal niches are superimposed. Differences in population dynamics over time may reduce competition for common, limited resources.

It is interesting to note that each strategy has a broad phylogenetic representation, and co-strategists may be contemporary competitors in different prevailing biogeophyscial niches. Changes in the characteristics of niches over time may favour different taxa, hence the rotation over time.

Each species seems to find its optimal niche at some or other time during the 30-year cycle. One may be tempted to invoke theorems of economics to elucidate population ecology, and indeed, there should be scope for ecological modelling to explore these patterns and broaden our understanding of ecosystem processes.

It is reassuring that the efforts devoted to this continuous long-term study have revealed fundamentals of desert ecology that would not be possible to recognise in any other way. However, this story is not yet over, and the Long-term Ecological Research (LTER) project must continue.

The Namib, the world’s oldest desert, is vulnerable to climate change. If the unprecedented increase in moisture witnessed in the past two decades is due to the weakening of the Benguella upwelling system, the Namib could be squeezed out of its hyper-arid envelope. Some time niches may disappear along with associated species. In that case, the Namib Desert, which is currently still a rare bastion of biodiversity stability, would join the growing list of threatened ecosystems.

We should join Gobabeb in continuing to watch that space. 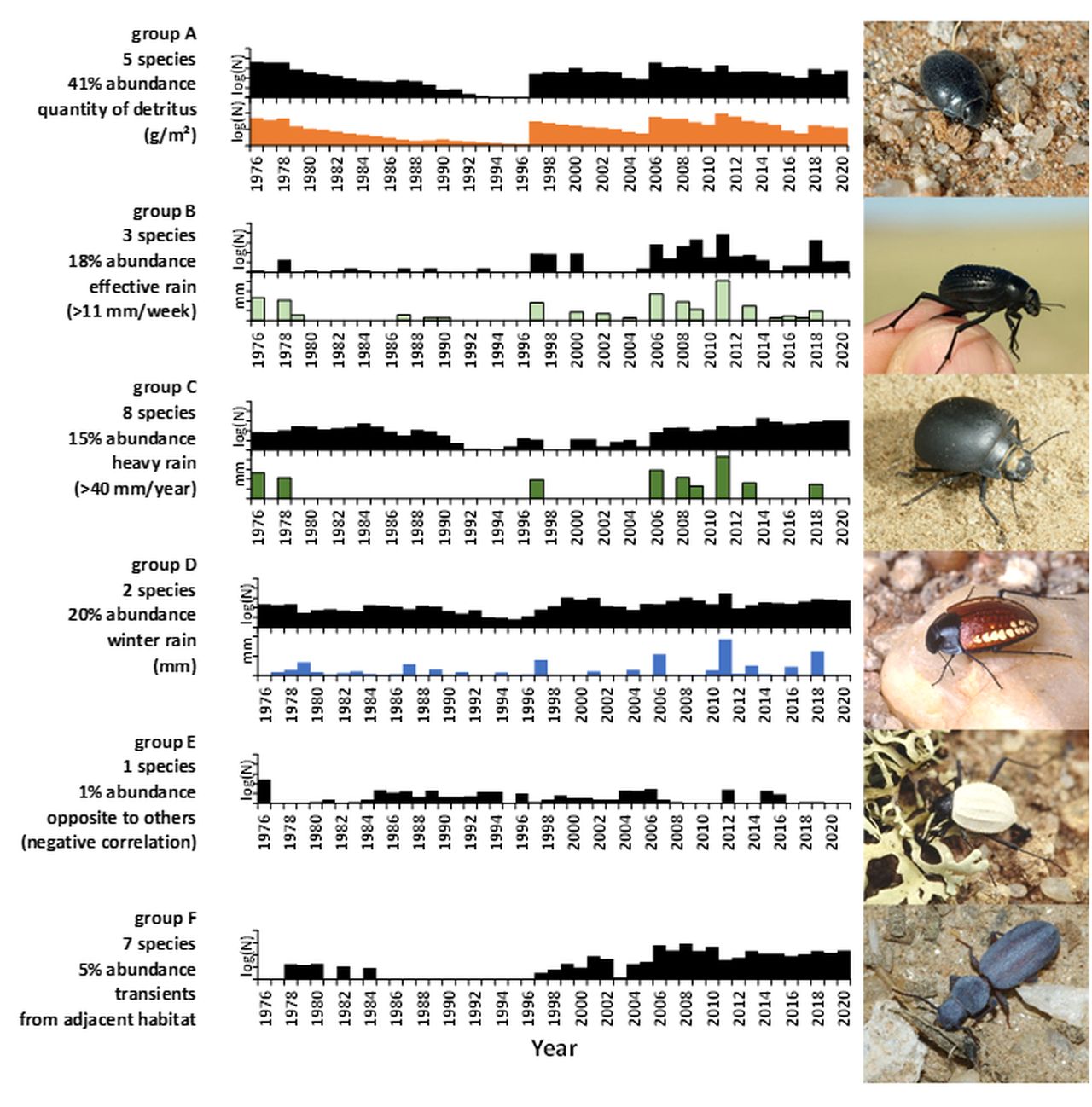