Objects and marine life in the ocean are subject to a variety of forcings from ocean currents, winds and wave motion. A thesis by Michael Hart-Davis, a recent graduate from Nelson Mandela University supported by SAEON and the Nansen-Tutu Center, investigated the ability of numerical ocean models to represent the transport of marine life and objects.

The thesis was awarded the S2A3 Masters Medal for outstanding research by a South African student at master’s level, the first time this award was received by a Physical Oceanographer.

During Michael’s thesis, he developed a particle trajectory model that allows for the deployment of virtual particles with varying characteristics into a numerical model to study the pathways of currents, objects and marine organisms.

As numerical modelling capabilities develop and physical mechanisms of the ocean are better understood, the importance of particle trajectory modelling continues to increase. Therefore, developing cross-disciplinary particle trajectory model applications for the Greater Agulhas System is highly relevant due to its potential contribution to scientific studies and operational applications.

The applications that were developed include a search-and-rescue scenario, the study of ocean dynamics and the study of the fate of juvenile turtles.

The thesis found that introducing spatially and temporally varying stochastic motion to account for the processes not resolved in the ocean surface current products, as well as including more appropriate boundary conditions, were shown to improve the accuracy of virtual drifters in the trajectory of a real surface drifter. Next, these developments to the particle trajectory model were applied to a search-and-rescue scenario of a capsized catamaran, which revealed that including both winds and surface ocean currents allowed for an improved prediction of the capsized vessel’s trajectory.

By comparing a pair of real surface drifters with the particle trajectory model and analysing high-resolution sea surface temperature fields it was shown that the formation of an eddy on the Agulhas Plateau, combined with the weakening of the core current velocity, resulted in enhanced eddy-current interactions facilitating the separation of the real surface drifter-pair as they passed through this region.

The model is developed based on the OceanParcels particle tracking framework and utilises the Copernicus ocean surface current model to force the virtual particles. For more information about the model, see: https://doi.org/10.13140/rg.2.2.36699.11047 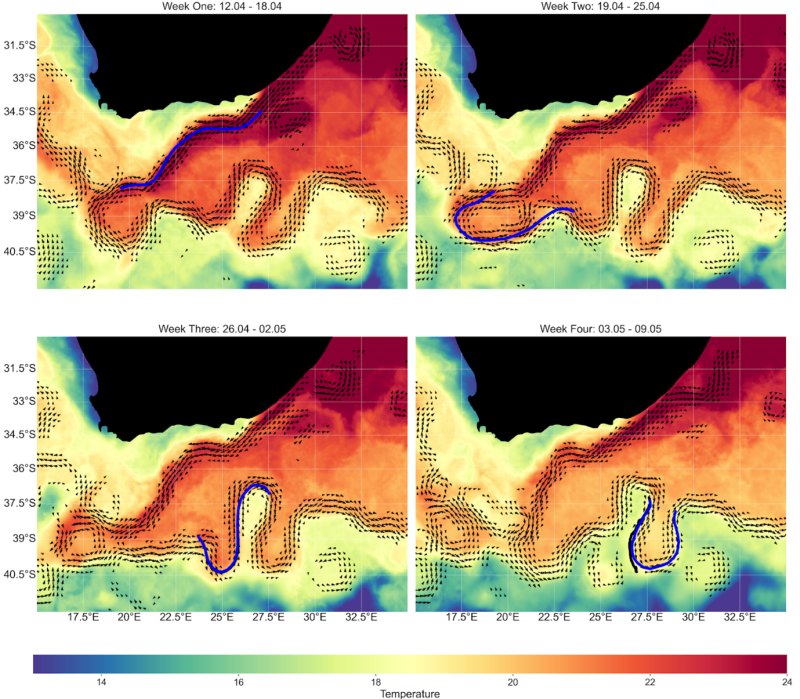 Figure 1. The trajectory of a real surface drifter pair deployed in 2015 in the Agulhas Current that was used in a test case of the particle trajectory model. The colours are the sea surface temperature from the GH1SST product, with the streamlines representing the satellite-derived surface currents (obtained from the GlobCurrent product). 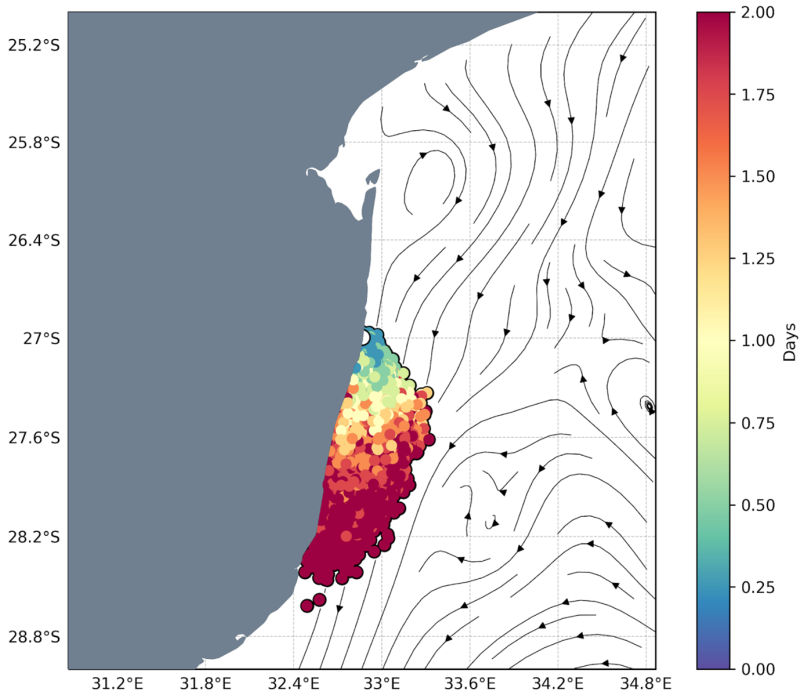 Figure 2. The initial trajectory of the virtual juvenile turtles for the first two days after deployment to demonstrate how likely it is for turtles to hit land in the first few days following deployment. The streamlines indicated the model surface current velocities (as obtained by Copernicus).

Researching the fate of juvenile turtles

Michael, alongside colleagues at Nelson Mandela University, recently published this research in the journal Ecological Modelling.

Aside from his thesis, Michael collaborated with research at the Oceanographic Research Institute to study the relationship between physical oceanography and genetic connectivity of the lobster larvae population in the Western Indian Ocean. These results were published in the journal Ecology and Evolution.

The model developments have significant impacts for the protection and cooperative governance of marine organisms by helping to understand where they end up in the ocean. Furthermore, the Search and Rescue research can be used to assist the search and rescue operations of objects lost at sea. With continued development, the applications can be broadened into fields such as oil spill modelling and plastics dispersion.

Juvenile turtles on a beach as they move towards the ocean. (Photo: Diane le Gouvello)

With further development and refinement of the particle trajectory model, Lagrangian ocean analysis has the potential to provide valuable information towards improving our understanding of physical and biological ocean processes at a range of spatial and temporal scales with potential operational oceanography applications.

Michael is thankful to his supervisors and institutions for the continued support and opportunities provided throughout his master’s thesis and his further research. 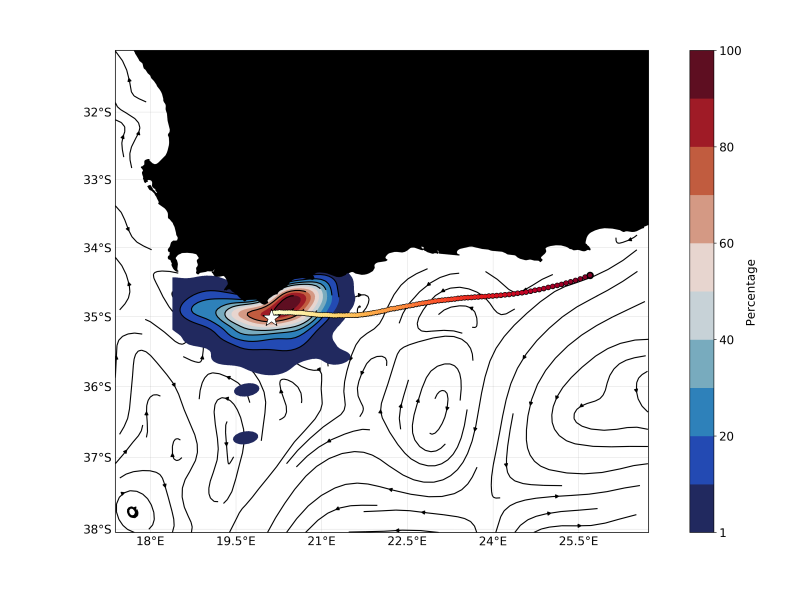 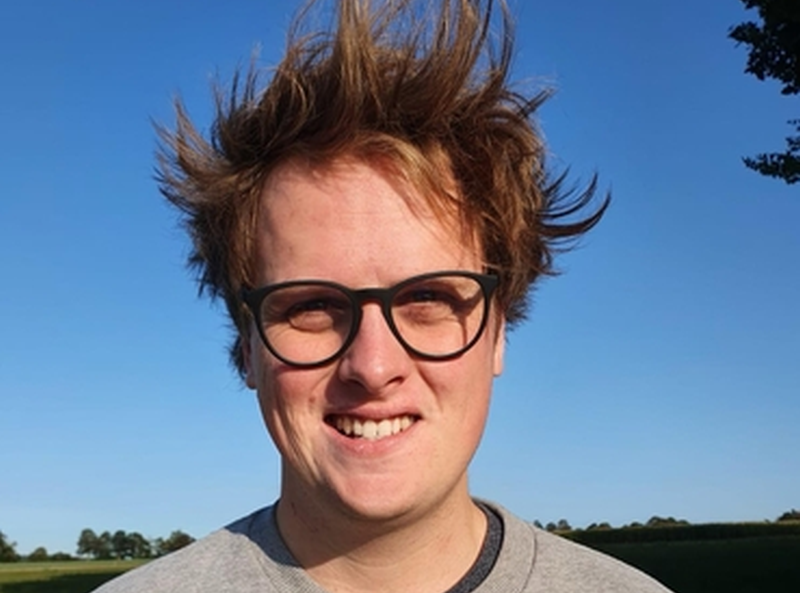 Michael Hart-Davis is the recipient of the prestigious S2A3 Masters Medal for outstanding research by a South African student at master’s level.